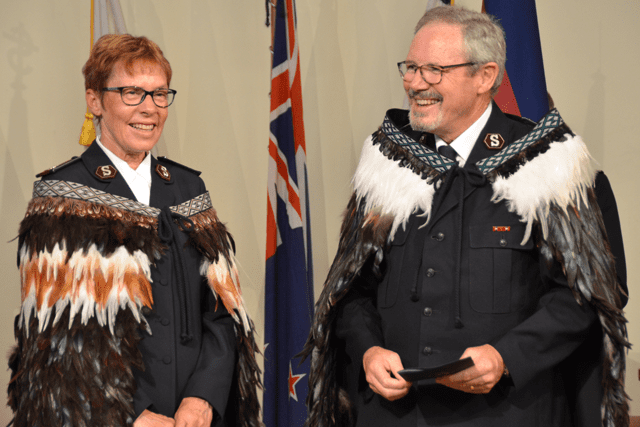 Chief of the Staff installs Territorial Leaders in New Zealand

By Christina Tyson, Major –
Chief of the Staff Commissioner Brian Peddle and Commissioner Rosalie Peddle, World Secretary for Women’s Ministries, installed Commissioners Andy and Yvonne Westrupp as new territorial leaders of the New Zealand, Fiji and Tonga Territory, and challenged Salvationists to mobilize and share the message of hope with the world.
Speaking at Wellington City Corps, Commissioner Rosalie Peddle—coordinator of “The Whole World Mobilizing” initiative—told the congregation, “We have to get back to what God is calling us to as a Salvation Army—getting out into our neighborhoods with the message of the love of Jesus, telling people there is hope for a hopeless world!” 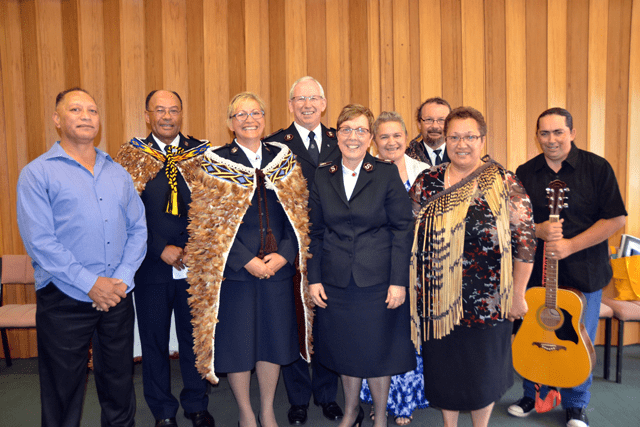 The Chief of the Staff said that, while it was good to see people coming together on Sunday, “You can’t stay here. You have to come to grips with the benediction—that God sends us out to a broken world. If God’s church is not mobilized into the world today, it is of no use to the world today.” As he said, we do not live in a world where people knock on our doors and say, “Tell me about Jesus.”
“God has rescued us; he can rescue others,” Peddle said. “Mobilize your heart and your convictions. God has given us a voice in the world!’
Territorial Commander Commissioner Andy Westrupp similarly called for “holy boldness” to go through those open doors. He described how years earlier, while ministering to addiction clients who attended their corps, he realized the way The Salvation Army “did church” often distanced it from those struggling to find God. The couple put that knowledge into practice when successfully planting a corps in Wellington’s northern suburbs in 1995. 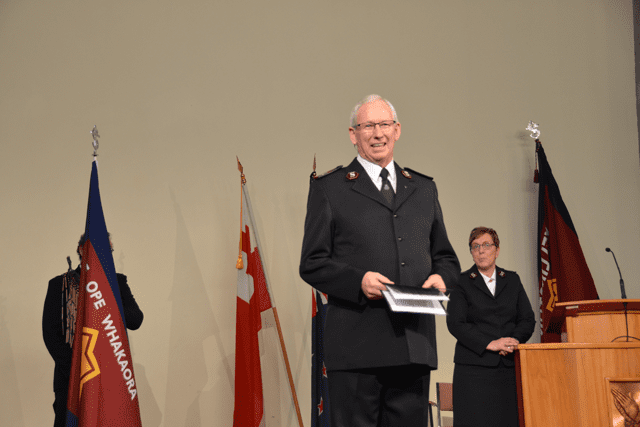 “The key was changing how we [presented the Christian message], so the Christ of the Cross could make sense to people,” Westrupp said. Most recently, the pair led The Salvation Army’s work in Papua New Guinea for three years.
The gulf between the churched and unchurched was even more of a challenge in 2017, Westrupp said, partly because people had even less biblical understanding. “Young people do not have any idea at all about Jesus Christ, and the cynicism of the world we live in has Teflon-coated their hearts,” he said.
The challenge was clear. “If we continue to do the things we’re doing, our numbers will continue to drop and we’re going to die. We have to adapt!” Westrupp said. “We’re not going to water down the gospel message, but we need to find ways to make sense to our target audience. We can adapt—if we have the will.”