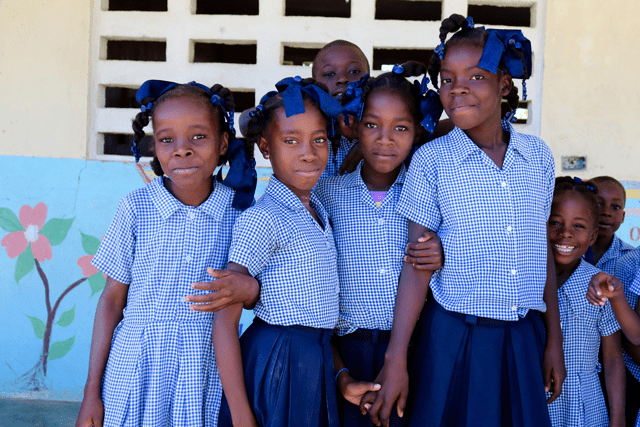 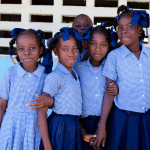 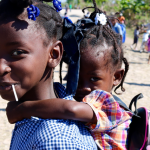 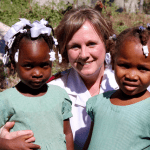 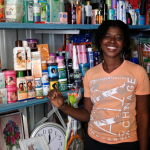 Beverly, a Haitian business woman who received a $100 micro-credit business loan and reopened her home business. 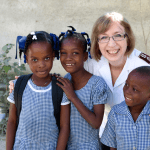 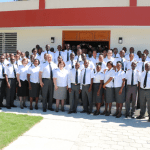 Commissioners Mark and Sharon Tillsley, on their first trip to Haiti, with officers of the Haiti Division in Port-au-Prince following Officers’ Councils. 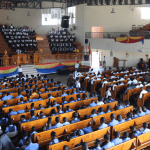 In service at the Port-au-Prince Central Corps, which was destroyed following the earthquake and rebuilt with funds from the USA Southern Territory. It is now reportedly the largest corps in the western hemisphere. 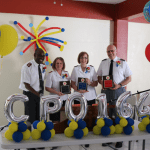 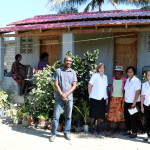 John Murray, Major –
Leaders of the Canada and Bermuda Territory and the Caribbean Territory gathered in Haiti in late January to celebrate the conclusion of the CPO164 Integrated Family Support Project.
The $3.6 million multi-pronged effort of the Canada and Bermuda Territory—funded by Canadian donors and administered by the territory’s World Missions office in partnership with the Caribbean Territory and Haiti Division—supported long-term recovery for the island nation rocked by a devastating 7.0 magnitude earthquake in 2010 that claimed 230,000 lives, and left 165,000 buildings damaged and 105,000 destroyed.
“Tragedy always seems to bring out the best in humankind and this was the case for Haiti as countries and NGOs responded with immediate aid and commitments for long-term recovery support,” said Commissioner Susan McMillan, Canada and Bermuda Territorial Commander. “Haitians are a strong, resilient people, and Haiti is a country that has embraced and benefited from the work of The Salvation Army for more than half a century.”
The CPO164 project provided direct support to 3,400 beneficiaries through earthquake-proof permanent housing for 213 families, micro-credit business loans to 900 individuals, training to start a small agricultural business for 1,100 people, and vocational training in partnership with state schools for 1,200 young adults.
“The person we meet today is very different from the person we met immediately following the disaster,” said Webster Blaise, Haiti Acting Program Manager. “They have confidence and their self-esteem is back. It’s very moving to see.”
One of those people impacted by CPO164 is Beverly, 33, who ran a home business until the earthquake struck. She reopened her consumer goods business with a $100 micro-credit loan from The Salvation Army.
“I started small, selling sandals and household goods,” Beverly said. Today, her store on the main thoroughfare of the bustling Arcahaie community stocks everything from groceries to household goods, and Beverly reports that her top-selling item is solar lamps. “My business would have folded if I hadn’t received the loan.”
Another, Marie Therese, a single mother of eight children, received assistance building a new house on her land.
“Stable, permanent housing is foundational to the development of families and the growth of communities,” said Major Brenda Murray, Canada and Bermuda Territorial World Missions Director. “It fosters friendships, encourages educational growth and business development.”
In a ceremony marking the end of the project, McMillan thanked the people of Haiti for their grace and strength in times of great personal sacrifice and difficulty and expressed appreciation to Canadians for their ongoing faith and support in the work of The Salvation Army.
Since 1950, The Salvation Army in Haiti has established 65 corps and outposts, primary and elementary schools and medical clinics, with more than 80 officers and 450 employees. The rebuilt Port-au-Prince Central Corps is the largest in the western hemisphere, with space for more than 1,500 people.
“We are grateful to Salvationists and friends around the world, who support the work of The Salvation Army in the Caribbean Territory and in Haiti specifically,” said Commissioner Mark Tillsley, Caribbean Territorial Commander. “We thank God for his goodness and faithfulness and celebrate all that has been accomplished in his name in Haiti.”
See more here.
Sharing is caring!
Tags:
Africa, Americas and Caribbean Zone, featured news, Haiti, Vol 35 No 03 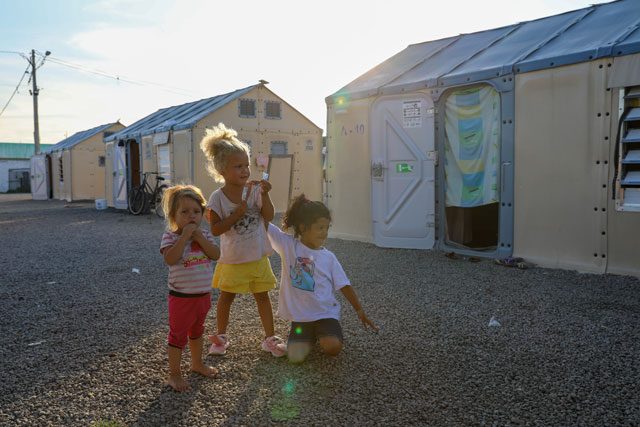