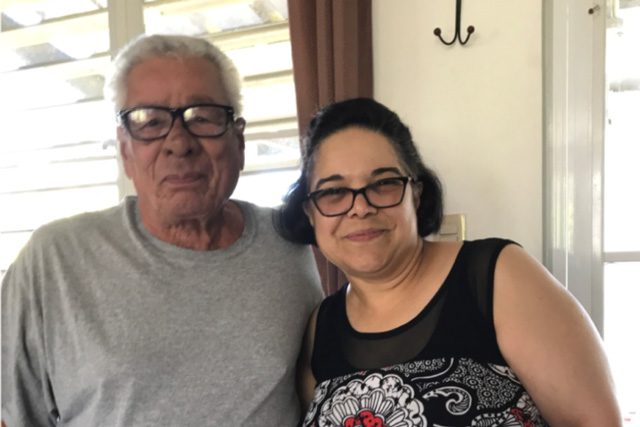 Out of divisional headquarters, this employee went to the front lines of emergency disaster response.

As Administrative Assistant to the Southwest Divisional Commander, Jeannette Soto didn’t expect to be asked to serve with The Salvation Army in Puerto Rico. But she did just that and landed on an island of need, and one with deep personal history, too.

I recently served for three weeks with The Salvation Army Emergency Disaster Services (EDS) in Puerto Rico—a very personal experience for me.  I am of Puerto Rican descent as my parents, grandparents and ancestors are natives of the island.

When I arrived on the island and witnessed first hand the devastation, I saw more than a disaster, I saw the history and homeland of my family in ruins. This was especially true when compared to the last time I went to Puerto Rico on vacation in 2006, when it was green, plush, vibrant and overflowing with vegetation.

It was a long and disheartening 30-minute drive from the airport in San Juan to the EDS building in Caguas. But my spirit was lifted when I arrived and met the officers, employees, and volunteers from all across the U.S.

We linked arms daily and participated in a successful partnership with the FBI, Coast Guard, Police, AmeriCorps and many other governmental and nonprofit organizations to provide aid to the islanders.

There were a large variety of roles to be filled and I filled more than just one role. I arrived with no expectations but suspected there would be long days of distributing food boxes and water. Within days I was asked to serve as the finance and admin chief. It was a great responsibility that I was humbled and honored to fulfill. And still there were long and challenging days of knocking door-to-door and handing out food boxes and cases of water bottles. Some days were spent grocery shopping, transporting vehicles to San Juan, cleaning dorm rooms, washing linen, and cooking meals for 20 or more exhausted people, and of course the daily petty cash distributions.  The opportunity to be a small part of something big that God was doing was enough to satisfy me and keep me going. And flexibility was on the agenda every day.

Jeannette Soto with her uncle, Nolasco Rodriguez, who she reunited with while serving with The Salvation Army in Puerto Rico. | Photo courtesy of Jeannette Soto

While there, I received a call from my father. Word had gotten out that I was in Puerto Rico and my dad was concerned about his older brother. He had been unable to communicate with him since the hurricanes knocked out the power lines and asked me if I could go check on him in Moca, two hours west of Caguas. I went the following Sunday to visit my uncle who I have not seen in over 20 years. It was a journey locating them without an address but I am happy to say I found them and was warmly welcomed.

My time serving EDS came full circle in many ways, including my personal connection to the work, but most importantly, God revealed something to me. When I was asked to be deployed for this work, my first thought was “I would love to go!” followed by a series of self-disqualifying thoughts such as…“I don’t have Emergency Disaster experience, my Spanish is rusty, and what will the divisional commander do without me? (kidding).” Then I remembered a phrase my husband used in a sermon once that “God does not call the qualified, he qualifies the called” and Ephesians 3:8 where Paul says, Although I am less than the least of all the Lord’s people, this grace was given me: to preach to the Gentiles the boundless riches of Christ. Although I did not do much “preaching,” I was given the grace and privilege to serve people, God’s people, and my people.

God pulled me out of my simple average life and gave me an extraordinary opportunity, not because I was looking for one or praying for one but because he knew my heart was willing, and is always willing to serve and that I would say yes without hesitation.  For the good of the mission I will go!