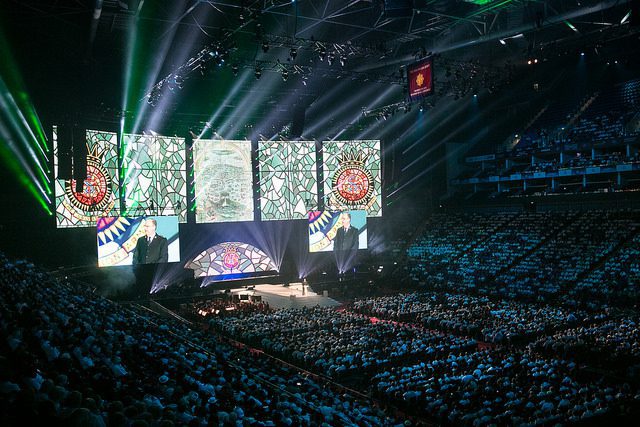 The Salvation Army commenced its 2015 international congress, Boundless – The Whole World Redeeming, on July 1 at The O2 Arena in London. With approximately 15,000 delegates in attendance, the opening session commemorated the joyful manner in which The Salvation Army has spread the gospel over the past 150 years while also imploring delegates to continue that mission.

After performances by the International Staff Band, transMission and London Citadel Timbrels, the celebration got underway with a video clip of General André Cox’s dream of “a committed, effective and joyful army, rooted and confident in the Word of God.”

Representatives from all five Salvation Army zones entered the arena carrying flags from each of the countries represented at the congress, channeling the opening ceremony of the Olympic Games. Each zone delivered a performance showcasing an element of its culture, including representations by ballet dancer Shaw Coleman (Europe), the South America West Dance Troupe (Americas and Caribbean) and the kapa haka group (South Pacific and East Asia). The sequence offered a snapshot of the vast expanse of the Army’s international ministry as the blood-and-fire flag was placed onstage to Dean Goffin’s arrangement of “O Boundless Salvation.”

The second session of Boundless 2015, ‘A Unified Army’, was a reminder that the Army expresses God’s love in practical ways – such as through emergency response, a hospital, a children’s home, by the digging of a village well, in the ministry of a rehabilitation centre.

Throughout the session, The Salvation Army’s work in communities with deep needs was highlighted in video reports and testimonials.

Highlighted programs included the Sand Dam Project in Kenya, the Tekokatu Clinic in Paraguay, a street hospital for drug users in Norway, and a Salvation Army children’s home in Kandhamal, India, and two reservoirs collecting water in an area with dry soil in the Qingquan Village in China’s Sichuan Province.

Captain Diana MacDonald, Territorial Secretary for Personnel in Pakistan and with wide Salvation Army healthcare experience, concluded the session with a reflection on Jesus’ contact with the Samaritan woman at the well, noting he treated her with respect and built a bridge across a cultural divide.

The message from the Founders’ Day evening session of Boundless 2015 was clear – William and Catherine Booth began The Salvation Army exactly 150 years ago, but the call to win the world for Christ must be answered by today’s Salvationists.

Highlights of the evening included the posthumous admitting of General Eva Burrows to the Order of the Founder, The Salvation Army’s highest honor, and the launching of the new song book.

General André Cox strode onto the stage and asked: ‘What better day than today to renew our commitment to salvation and the fight?’

Tribute was paid to Catherine Booth, who was recognized as equal partner in her husband’s work. Never commissioned, the congregation heard, she never held a rank – except for Mother of The Salvation Army.

With the backdrop of a giant ‘blood-and-fire’-emblem star, Commissioner Silvia Cox (World President of Women’s Ministries) closed the session by offering praise through prayer in passionate French, thanking God again and again for all he is doing.

The theme ‘A Caring Army’ marked session 4 at Boundless 2015, highlighting the compassion with which The Salvation Army serves humanity.

Xyloband LED wristbands worn by attendees lit across the arena as Salvationists from around the world sang together in their own language ‘How Great is Our God’ with the New York Staff Band, transMission, the Amsterdam Staff Songsters, the Indian Mizo singers and Ayoung Lee.

The session featured both individuals engaged in caring service and modern large-scale efforts to enact change.

‘We want to be known as a caring Army, individuals and communities who understand God’s heartbeat and make his Kingdom a reality here on earth right now’, said Commissioner E. Jane Paone (Territorial President of Women’s Ministries, Switzerland, Austria and Hungary Territory) in the message. ‘Here we are, gathered together as a global Salvation Army to celebrate God’s goodness and faithfulness. Each day, at a local level, and at an individual level, we are to show Christ’s love. He is the One on whom we depend completely, our source of love and light. He depends on us to act with compassion and justice.’

‘God so loved the world that he gave!’ she said. ‘He counts on our response.’

Marching in vibrant outfits, speaking various languages from cultures all over the world, Salvationists entered The O2 arena in London on 3 July for session 5 of Boundless 2015, ‘An All-Embracing Army’. General André Cox and Commissioner Silvia Cox entered on a simulated jet, stepping off the plane to greet the audience.

‘Tonight we are going to take you on a journey around The Salvation Army world,’ Captain Nokuthula said.

General Cox closed the night with a benediction. ‘Reject every type of evil, he said. ‘May God himself, the God of peace, sanctify you through and through. May your whole soul and body remain blameless. The one who calls you is faithful and he will do it. Amen.’

This statement by 15-year-old Sean Voeller, a Salvationist from the USA Central Territory who accepted God at the age of five, marked the beginning of session six, “A Youthful Army.”

General André Cox and Commissioner Silvia Cox gave their testimonies. ‘Young people are extremely precious,’ General Cox said. ‘I don’t believe they are the future of the Army – they are the Army of today.’

The General challenged those who did not have existing development programmes for youth to fix that in a year.

A musical finale of ‘Shine, Jesus, Shine’ followed and Rebecca Barton, alongside the General and Commissioner Cox, concluded with a benediction.

Session 7: An Army of Integrity

The screens displayed an international Army at prayer as people offered prayers in different languages to start the final session of Boundless 2015.

Soloist Ayoung Lee started to sing the hymn “Holy, Holy, Holy” and was joined by a virtual choir of Salvationists from around the world whose individual images appeared on the screens.

“What has this celebration been all about?” General André Cox asked. “‘What is going to change? What is God calling you to do?” He said the dream will only become a reality when lives are transformed by the Holy Spirit and that holiness is the visible sign of salvation.

“We must be totally committed and dedicated to the task assigned to us. If we’re convinced of our call we will live lives fully surrendered to God,” he said. “Our worship needs to be more than speaking or listening to God. It must be about total surrender. We need a sense of urgency in a world where there is so much injustice and need.

“We are still and Army that rescues those who are damaged by life…,” he said. “Our lives can point people to Christ… All our programs are but a gateway to the hearts and minds of people.”