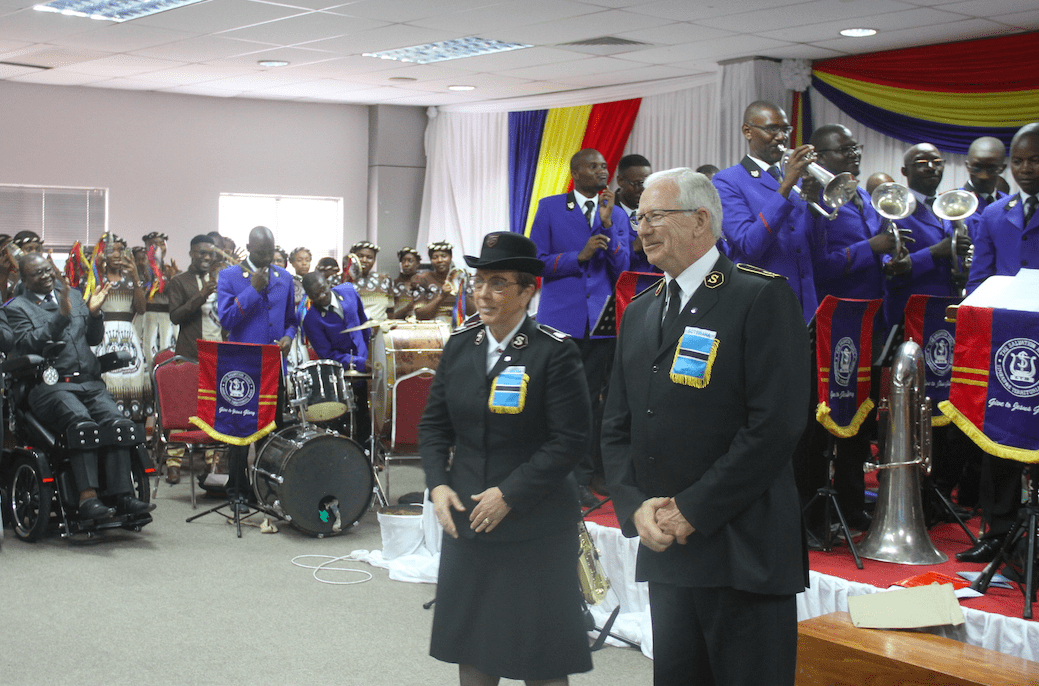 Salvationists and friends welcomed General Brian Peddle and World President of Women’s Ministries Commissioner Rosalie Peddle to Botswana, where they became The Salvation Army’s first international leaders to visit the country. The Peddles also spent time in Zimbabwe during the week-long visit to the Zimbabwe and Botswana Territory.

In Harare, Zimbabwe, the General and Commissioner Peddle led officers councils for 590 active and retired officers, cadets and envoys. Basing his message on his Call to Mission, the General told his listeners to play their part in the mission to win the world for God.

After the councils, the General opened and dedicated the quarters which will be home to the divisional commander of the Greater Harare Division. The house was built using funds entirely raised by soldiers and friends from the division, with no external funding sought. The project was a celebration of progress toward financial self-reliance in the territory.

On arrival in Botswana, the General and Commissioner Peddle received a traditional welcome from the Mafitlhakgosi dance group. The General was presented with a hat and a walking stick while Commissioner Rosalie was draped in a blanket, as is a tradition in Botswana. They were also greeted by junior soldiers who enthusiastically waved the Botswana flag.

From the airport, the leaders went to a meeting with the Minister of Presidential Affairs, Governance and Public Administration, Kabo Morwaeng. Talking about The Salvation Army’s psychosocial support work in Botswana, the General assured the Botswana government of the movement’s continued support in transforming the lives of Botswana’s most needy individuals. The minister welcomed The Salvation Army’s ongoing support. He recognized the ministry of the Church, which he said is strategically positioned to deal with humanitarian crises by virtue of its mandate and ability to reach the population at a grassroots level.

After the meeting, the international leaders shared in fellowship with the Botswana Council of Churches, of which The Salvation Army is a member. The President of the Council, Bishop Metlhayotlhe Beleme, told guests: “Although Botswana is not a Christian state, admittedly we are a nation of Christians, not only so because of the numerical advantage, but further because of the role the Church played in both pre- and post-independence Botswana.”

On Saturday afternoon, musicians from Zimbabwe and Botswana provided a two-hour concert held in Ave Maria Pastoral Center. The event was attended by Minister Morwaeng, whom the General and Commissioner Peddle had met earlier.

The international leaders concluded their visit with a holiness meeting on Sunday attended by soldiers and friends from both Zimbabwe and Botswana.

In his Bible message, the General spoke about God’s grace. He encouraged Salvationists and friends in Botswana to respond to God’s call, surrender their lives and walk in obedience. He challenged them to take the love of God into a world that is hurting.

The meeting concluded with the General calling on everyone gathered to consecrate their lives to Christ.