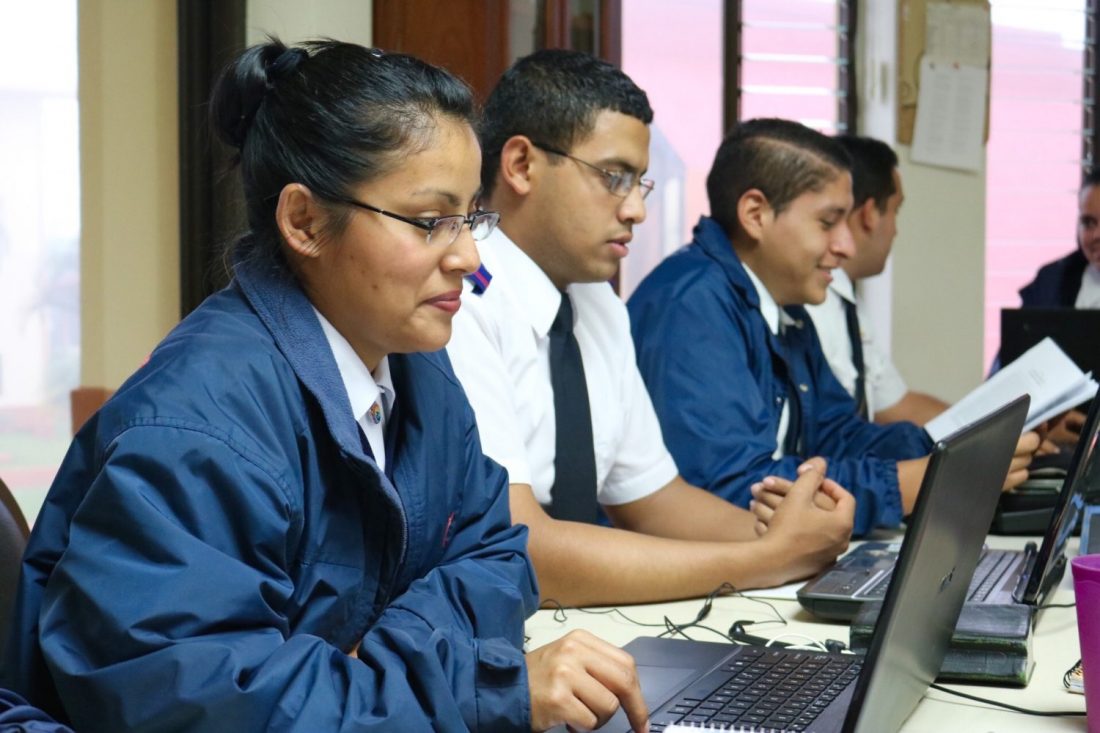 With a new Latin American initiative, The Salvation Army’s lone university college takes a major step toward its 2020 vision.

A group of cadets and young officers from throughout Central America gather around a U-shaped formation of desks in a classroom at The Salvation Army Training College in San Rafael de Heredia, Costa Rica. Though just a short trek north of the capital, San José, the campus itself is especially remote, nudged far up in the hills of “the city of flowers,” away from any of the bustle below.

Inside the classroom, at the opening of the desks, stands Major Philip Davisson, associate dean of Booth University College (UC) in Winnipeg, Canada. He’s there leading a five-day seminar on Wesleyan Distinctives—a primer on what The Salvation Army believes and why.

For Davisson, a Chicago native, this environment isn’t so foreign. He’s been appointed to assignments in South America, and he speaks fluent Spanish. But for Booth UC, this is far from home—over 2,500 miles away. And that’s the idea.

Through its School for Continuing Studies’ (SCS) international course development, the Christian liberal arts university college is redefining its long-held approach to classroom instruction. Instead of keeping its resources confined to the brick-and-mortar campus in Winnipeg, it’s deploying them to far-flung areas where The Salvation Army has a presence, but neither the time nor the resources to augment their curricula for future leaders.

Establishing an SCS marks one of Booth’s six strategic initiatives toward its 2020 vision—the school eyes a future as a hub for Salvation Army leadership development, training, and education for officers, staff and lay members.

Earlier this year, the SCS offered non-credit courses at training colleges in South America and Cuba, and other locations, including Africa, could soon join the list. Though it’s only recently come to fruition, the idea for Booth to serve The Salvation Army in a global capacity is nothing new.

“Really from the beginning, the Booth [University College] was created with an intention to be a resource to the larger world, sort of building off of William Booth’s idea of ‘the university of the world,’” Davisson said. “It follows the same kind of logic when we’re talking about how can we gather resources from different places, bring them together and deliver them from different places.”

The brief, non-credit seminars could, however, signal the onset of something more robust for Booth. According to Davisson, the mindset was always, “If we could manage this, maybe we could do more.”

Back in 2014, territorial leadership at the Latin America North (LAN) Territory, reached out to Booth UC about the dearth of officers in the territory ready to step into leadership roles. They realized that “the territory is in the hands of captains and lieutenants, which is as good as it is bad,” said Lt. Colonel David Alarcon, chief secretary, of the LAN territory.

Major Philip Davisson, associate dean of Booth University College’s School for Continuing Studies, in Winnipeg, Canada, interacts with cadets at The Salvation Army’s Training College in San Rafael de Heredia, Costa Rica, while conducting a seminar on Wesleyan Distinctives in June. The course is a pilot for a more fleshed out curriculum to help the Latin America North Territory with its leadership development. | Photos by John Murray

A sound theological foundation is one component of developing strong leaders, but young officers needed to start building more advanced leadership skills to be able to take the place of divisional commanders in the next few years, they determined. Officer assignments in the LAN territory are particularly challenging, due to their remoteness and limited access to resources, and young officers need all of the grooming and priming they can get before being deployed.

It just so happens that Booth UC offers several certificate programs for the officers in the Canada and Bermuda Territory, including not-for-profit leadership, advanced leadership for congregations and chaplaincy and spiritual care. “Some of the same principles are very transferrable,” Davisson said.

Moving forward, they’re looking at ways they can disseminate content from these courses to the cadets and officers around the territory, be it online or by flying instructors to remote locations, as with Davisson in Cuba and Costa Rica. Major John Murray, vice president of advancement for Booth UC, alluded to the school’s bigger picture—for 2020 and beyond.

The Salvation Army’s only university college, Booth UC recently settled on a new mantra: “Education for a better world.” And as it starts to dig into its lofty global ambitions, it’s becoming less a mantra and more a reality.

“We’re hoping to take advantage of this opportunity to have larger conversations,” Davisson said.