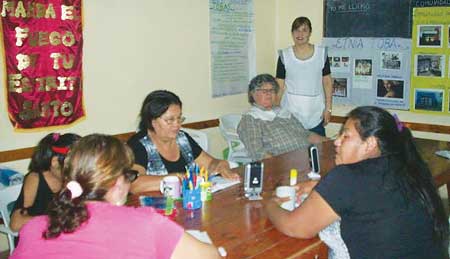 The Salvation Army is responding to a need for adult education programs in Argentina with the TALITA-CUMI Literacy Center and Adult School.

In a country with a 7.2 percent unemployment rate, CountryReports indicates that 98 percent of Argentines know how to read and write by age 10, but there are still over 850,000 people who do not.

The Santiago del Estero Corps, led by Lt. Mauricio Gutiérrez, created the TALITA-CUMI Literacy Center last year with the initial goal of educating parents so they could help their children with their schoolwork. However, the whole program changed course after realizing the poor literacy amid the poverty-stricken Santiago del Estero community.

“We want to reduce the illiteracy rate that exists in our province,” Gutiérrez said. “Many of our students are women who for one circumstance or another, were unable to attend finish or attend school at all.”

The program started with five women, and grew to 21 this year. Although the group is predominantly female, it is open to anyone wishing to learn. The curriculum consists of reading and writing lessons, as well as elective workshops that include making party decorations out of recycled materials and sewing garments, which they can then sell.

“The students benefit from learning something ‘basic’ for others like reading documents and signs by becoming independent and confident, which will hopefully get them a job in the future,” Guttiérez said.

The Adult School program at the Resistencia Corps, led by Lts. Adrian and Soledad Ferrada, emerged in March to educate people who had not been able to complete their elementary education.

With 15 current students, the program curriculum consists of four stages that cover seven grade levels. Each of the stages cover language arts, mathematics, history, and science. There are also elective courses in embroidery, physical education, and computer science.

“The ultimate goal of this program is to give people the opportunity to receive the elementary education they were unable to complete as children,” Adrian Ferrada said. “Through this, we hope that they are able to take an active role in society.”

on the corner “The future of Salvation Army social work”

the spice box “Nuturing the seed within us”

from the desk of…Going home