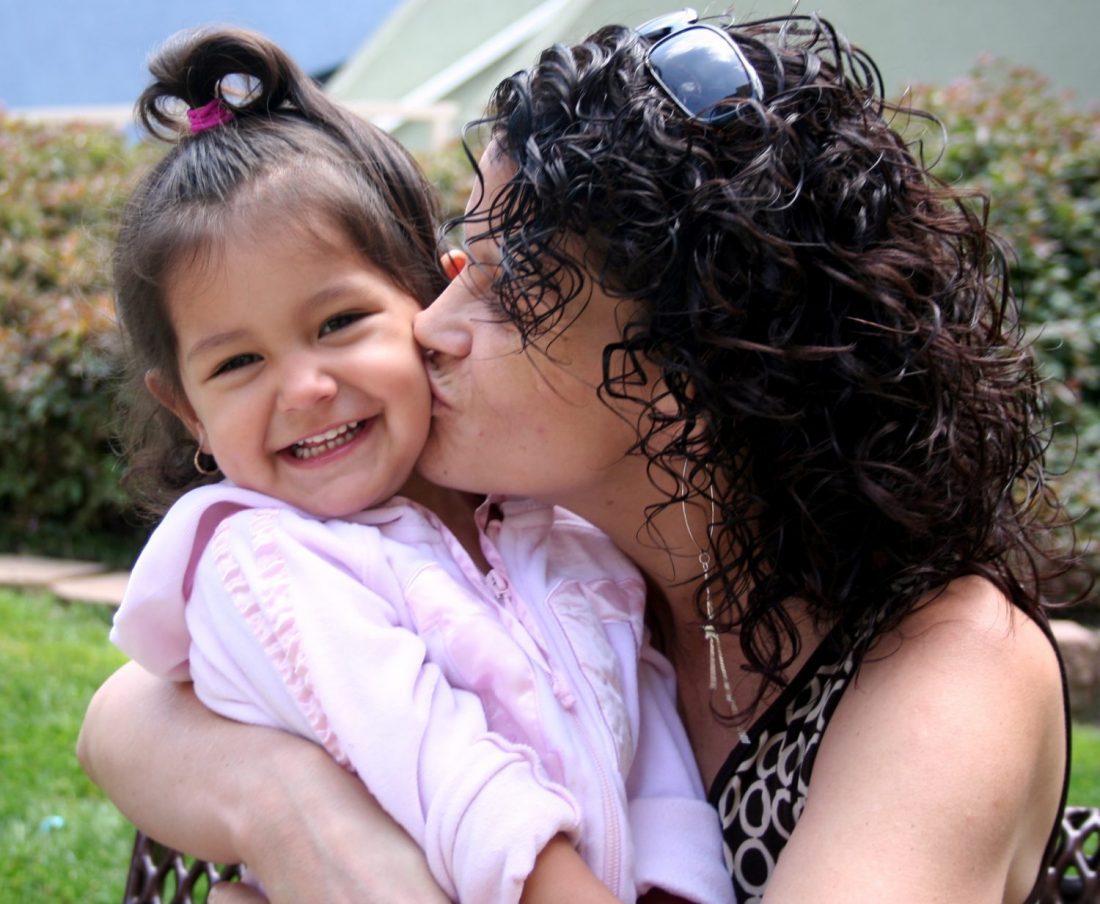 Triumph over tragedy in a place of joy

Jill Vargas checked out of a motel and walked with her 1-year-old daughter, Jenna, to a nearby park in Chatsworth, California. Evicted from her apartment, she had lost everything she owned, including a beloved oak table. The mother and daughter duo waited in the park for Jenna’s father to arrive with money, not sure where they would stay that night.

Jill hadn’t even realized she was pregnant with Jenna until she was six months into her term. A few days after receiving that news, Jill was called back to her obstetrician. The doctor informed Jill that not only would she have a child in three months, but she was HIV positive and had AIDS. The pregnancy was too far along to prevent transmission to the baby—her daughter would be born infected.

Devastated, Jill fell deep into depression, which worsened with postpartum depression after Jenna was born. She would lie, unable to move, in her apartment—no longer working and barely able to care for her newborn and her adolescent daughter—and unable to attend doctors’ appointments. After the gas and electricity were shut off after weeks of unpaid bills, the family was finally evicted; they lived in a motel for two weeks until Jill had no money left. Waiting for emergency welfare assistance, Jill called her baby’s father for help.

Lying in the park’s grass, Jill saw two women walking with policemen in her direction and knew something was wrong. They were from the Department of Child and Family Services, one of the women said, and were there to remove Jenna from her mother’s care, citing general neglectfulness.

With tears glistening on her cheek, Jill recalled that painful day in March over a year ago, when she watched her 1-year-old daughter being carried away.

“There is no bigger kick in the side than the threat of having your kids taken from you,” she said. “There was nothing else that could have happened to me.”

Now, at age 2, Jenna offers anyone coming through her front door a strawberry and banana “moothie” made from her plastic play kitchen in one corner of the Vargas’s living room—a typical smiling toddler, except for the four vials of liquid antiretroviral medication she takes twice a day.

Referred to The Salvation Army, Jill, Jenna, and 16-year-old Mya now live together at Alegria—Spanish for “joy”—a transitional housing program for families dealing with the reality of HIV and AIDS.

The curly-haired toddler spends her days drawing, in circle time, playing on the outside jungle gym, eating snacks and napping at Alegria’s on-site Child Development Center, with over 60 other children, ages 3-months to 5-years-old, from Alegria and the surrounding community.

“She has absolutely flourished since starting preschool,” Jill said. “She wants to go to school and comes home telling me everything she learned. I couldn’t hope for a better place.”

Through active learning in organized play, nurturing interactions and exploration in a safe, predictable environment just for children, the professional staff helps the young boys and girls develop emotionally, physically, socially and cognitively. The center’s philosophy is to help each child develop to his or her fullest potential.

Open five days a week from 7 a.m. to 5:30 p.m., the childcare program is provided free of cost to qualifying families.

care, structure and guidelines, and love these kids.”
Staff—required to have 24 units in early childhood development or an equivalent Associate’s

degree—work to maintain an emotionally warm and stable environment that enables children to develop the basic trust necessary in acquiring independence. Personally involved with the children’s daily life, the staff encourages partnership with parents.

“We hope these kids grow to be healthy and safe,” Borrego said. “We want the structured environment to translate into their home lives, leading them to make better choices and grow into independent people.”

A place of joy

Alegria opened in 1992 to provide affordable housing and intensive support services for homeless and low-income families affected by HIV/AIDS in downtown Los Angeles, and moved to its current location in 2001.

The 16 transitional living apartments and 28 long-term townhomes are situated on Sunset Boulevard, in the Silverlake district of Los Angeles, an area with the highest incidence of AIDS in Los Angeles County.

“It’s okay to talk about what is going on here,” said Julie Lewis, director of the transitional housing program. “We have a potpourri of society living together with an unfortunate common bond.”

Upon acceptance to the transitional living program, a family meets with staff to develop a “needs and services plan” to address their specific needs. Services include case management, on-site medical services and those provided in partnership with local hospitals and medical agencies, HIV/AIDS education, individual and group counseling, licensed child care, tutoring and recreational activities for children, entitlement assistance, employment assistance—and the love and concern of staff.

“There is no substitute for human caring and kindness,” Lewis said. “There is no one living here that doesn’t want to talk—knowing that somebody cares helps them progress.”

The success rate for families is high—86 percent find permanent housing within the two-year program period and are able to remain independent.

“Being here is my foundation. Some people complain about the rules and curfews of the program, but the tight ship is what makes it successful—so many people move on to independent housing,” Jill said. “I cannot say enough good—this has been a godsend.”

Each apartment is remodeled before a new family moves in, at which time the 24-hour on-site staff emphasizes normal living and how to provide stability within their own families through interaction and encouragement.

“The more you interact, the more you find out,” said Dr. Betty Bass, director of clinical services, who monitors the clinical well being of residents. “We like to call it elevator therapy— you’d be amazed at what you can find out on a trip upstairs, and the little snippets you find out provide insight into their life.”

Lewis believes, and emphasizes with staff, that they are present to serve in any way possible. “We embrace the approach of ‘What can I do for you?’” she said. “Sometimes I even think we should wear the blue Wal-Mart vests with that question printed on the back.”

“We provide a setting to make significant changes in lives,” Lewis said. “It’s the changes that grab you and leave an impact on your life.”

The issue through time

When the HIV/AIDS virus broke in the 1980s, it was a death sentence. Now more than 25 years later, medications allow patients to live with the disease—but patients need to learn how to do so.

By September 1982, the Centers for Disease Control and Prevention (CDC) published a case definition of acquired immunodeficiency syndrome (AIDS). In 1986, the International Committee on the Taxonomy of Viruses designated the causing virus as the human immunodeficiency virus (HIV).

Diagnoses rapidly increased in the United States from the more than 100 reported cases in late 1981 to over 500,000 in October 1995. The last available statistic in late 2003 estimated 1.5 million people in the United States were living with HIV/AIDS, according to the CDC.

Transmitted through intimate contact with blood as in blood transfusions, sexual activity, sharing needles or personal items such as razor blades, or from mother to unborn child, AIDS has taken more than 25 million lives worldwide.

Lt. Colonel Carol Seiler, currently territorial secretary for women’s ministries in the Central Territory and trained as an RN with a Master’s degree in Public Health prior to officership, researched and taught AIDS education for the Army in the late 1980s. She was instrumental in the vision and opening of Bethesda House, precursor to Alegria, to shelter families and children affected by this disease.

“We dealt with issues of ethics, definition of family, moving from a hospice mind-set initially for people infected with AIDS, to one of life and community for people affected by AIDS,” Seiler said. “As the issues of life were dealt with, and food and shelter were provided, people improved.”

Though the rate of infection has decreased by 70 percent since 1994, according to the CDC, the disease is still an issue in our society and The Salvation Army continues fighting against it.

“At one time people felt saturated with the information about HIV/AIDS,” Seiler said. “The alarming thing now is that education is needed for another generation.”

For Jill, the hardest thing to deal with is the view other people have of her.

“The worst part about this diagnosis is other people’s perception. They don’t understand and think it is something it’s not,” Jill said. “Second to that is the fatigue.”

“We have educated people come here who don’t understand that you cannot contract HIV/AIDS by being around those who have been positively diagnosed,” Lewis said. “Anything that is life threatening we all should be thoroughly educated about.”

“It’s not a good thing to be living with HIV/ AIDS,” Lewis said. “But there are good things happening—we are trying to make a bad thing positive for people at Alegria.”

“My story seems so tragic,” Jill said. “But I haven’t lost anything; I’ve gained everything.”

In May of this year, Jill and her two daughters moved into permanent housing at Alegria and Jill has committed to stop smoking.

“I want my kids to be able to be kids, to be happy, and not go through what I did,” Jill said. “I love being a mom. My kids are my measuring stick for success— their success is mine, too.”
“You can’t always be a rock; sometimes you need support,” Jill said. “But I won’t ever fall again.”