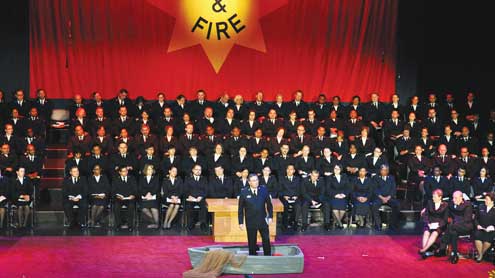 A lone cello onstage at the Pasadena Civic Auditorium strung “All there is of me, Lord” as the Proclaimers of the Resurrection Session individually marched through the audience and took to the platform June 16, red epaulets affixed and a Bible in hand.

The Proclaimers of the Resurrection, including 58 cadets and 15 auxiliary captains, come from a range of careers and experiences. Forty-two are first-generation Salvationists; one is a seventh-generation Salvationist. These 73 individuals represent 10 percent of cadets worldwide being commissioned this year, and the largest session in the West since 1993 (which had 62 cadets).

“With these diverse backgrounds they have come to Crestmont and become a community, studying everything from recovery ministry to disaster services…They are ready to accept their mission in The Salvation Army,” said Major Timothy Foley, College for Officer Training (CFOT) principal, in his commendation of the cadets to territorial leaders Commissioners James and Carolyn Knaggs during the Commissioning and Ordination Service.

The cadets affirmed their faith, reciting The Salvation Army doctrines and their oath as ministers of the gospel before Knaggs commissioned and ordained them. A member of the Territorial Executive Council prayed with each one. 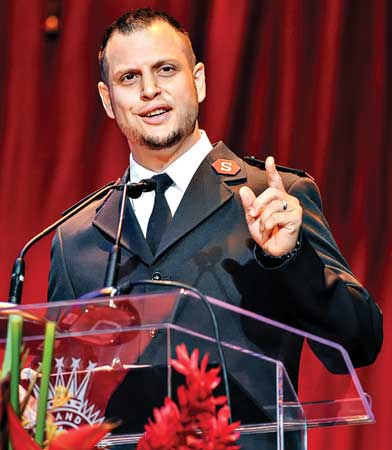 “‘A greatness of a man’s power is the measure of his surrender,’” testified Lt. Troy Cook, quoting Founder William Booth. “I would not be a proclaimer without full surrender to my Savior.”

Cook said he returned to Christ at 27, through addiction and frustration. “Through grace I finally found surrender,” he said. “Training college stretched, pressed, pushed and formed us, but we’ve grown in leaps and bounds and learned that there is no challenge greater than our God. We are ready to close the books, roll up our sleeves and get to work.”

“Without the cross of Calvary, it all counts for nothing,” Knaggs said. “Resurrection power and authority provide grace abundant so that we may be fishers of men and change the world. To understand the truth, you’ve got to ask Jesus into your life and invite him ‘into the boat.’”

A clip from History Channel’s “The Bible” visualized the story of Jesus walking out on a stormy lake to the disciples, and Peter walking to Jesus on the water.

“The Word of God asks you to invite Jesus into your life and into the boat but then there comes a time when you’ve got to get out of the boat,” Knaggs said. “It’s not incidental that this wasn’t a serene lake in this scene…We shouldn’t be waiting for a calm sea, but recognize him despite the howling winds and step out to Jesus.”

Knaggs read John 15:16-17: “You did not choose me, but I chose you and appointed you so that you might go and bear fruit—fruit that will last—and so that whatever you ask in my name the Father will give you. This is my command: Love each other.”

Just hours later, in the Service of Appointments, the Proclaimers of the Resurrection displayed a willingness to step out in faith.

“Regardless of our past, we all were dead in sin,” said Lt. Regina Verdugo, session representative speaker. “I was deemed a prostitute, doomed to prison and despair but now through the power of the resurrection I am saved. Today we are ready to go forward and point to Jesus.” 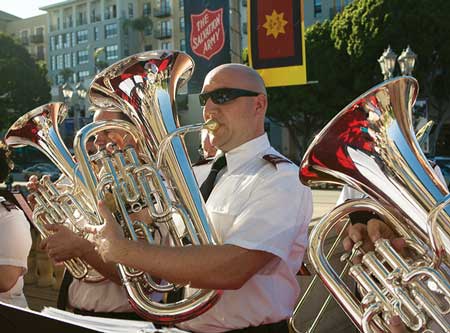 In the charge to the new lieutenants, Dr. Robert L. Docter, O.F., editor in chief of New Frontier Publications, told the newest officers, “We’re turning The Salvation Army over to you for the coming generation.”

He returned to the story of Jesus and Peter in the boat in Luke 5.

“If what you’re doing isn’t working—if you’re not catching fish—stop doing it and do something else,” Docter said. He reminded the session that Jesus said to feed his sheep and outlined steps including simply stopping to talk to people, avoiding judgmentalism, and being kind. (Read the complete list in Docter’s On the Corner column, New Frontier vol. 31 No. 10.)

“Be anywhere in your town where people find themselves immersed in a world of hurt. Be there. Empathize. Emulate Christ,” Docter said. “As Booth said, ‘Keep the flag up. Wear your uniform. Say something to some poor sinner every day and you will not go far astray.’”

Standing before Commissioners Knaggs and anxious onlookers, each one received his or her first appointment as a commissioned officer in The Salvation Army.

“These are people willing to step out in faith. It’s a demonstration to you as they present themselves and their family asking God, ‘Where do you want me to go?’ and answering yes,” James Knaggs said. “They are not appointed to the corps building or Sunday meeting, but are appointed to the whole community.” 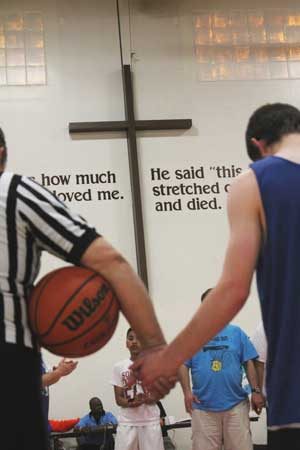 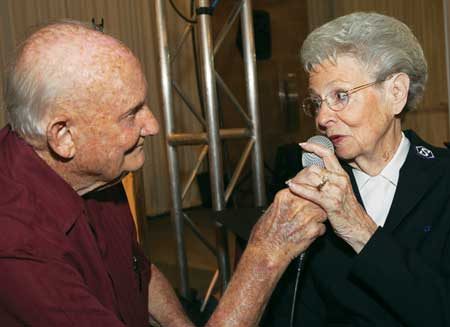