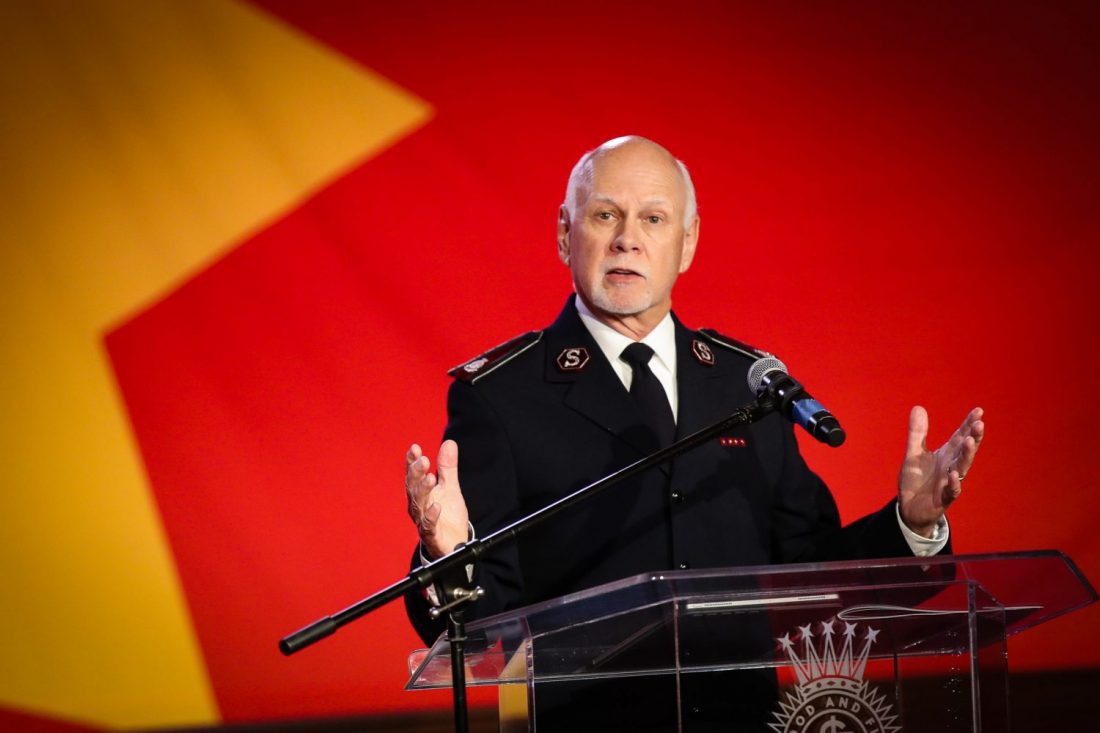 Will people see Jesus in you?

I’d like to add my congratulations to the Messengers of the Kingdom. I can certainly say to you that exciting days are lying ahead of you. I still remember on our commissioning day, many older officers—probably similar to me today—coming up to me and telling me how quickly the time would pass. I have to admit I didn’t believe them, and yet, here we are, Sharron and I, just a few days away from the day that we enter retirement. The Psalmist certainly knew what he was talking about when he said, “Humans are like a breath. Their days are like a fleeting shadow” (Ps. 144:4). But exciting days are ahead of you.

So, today, I find myself asking more questions than I have answers. And if I’m honest, I have to say most of the questions I have, I have no answer for. My wife and I, just over a year ago, built our retirement home. And it’s in wonderful, sunny Peoria, Arizona. And several people came up, and when they saw the house, they talked to us and said how God had “blessed us” with this house. And while I know that their intentions were good, I didn’t feel necessarily good inside.

Don’t get me wrong. I’m very grateful for what I have. But I struggled with the statement because immediately I went back just a few months earlier when I was walking through the Kibera slums in Kenya and seeing poverty like I’ve never seen before. And standing in my new house, I wondered where is God’s blessing on them?

Last year, my wife and I went to Indonesia. We visited Palu. We stayed at a wonderful hotel, and we met Salvationists and we met students at a school and they were the most beautiful people I think we’ve ever, ever seen. And one month later, they were devastated with a tremendous earthquake and a tsunami that took out the hotel we were staying in. And I pulled up all of the pictures of all these beautiful children that I had on my phone, and looking at each and every one of them not knowing if they were alive today. And I asked myself the question, “Where is God’s blessing on them?”

I went to one of our shelters and I met a young gay man. He grew up in a Christian home. I want you to understand what I just said: He grew up in a Christian home. And when his parents found out that he had same-sex orientation, they kicked him out of their home. As a side note, he was fearful at first, coming to our shelter, because he had heard that we didn’t like his kind. And I asked myself the question, “Where is God’s blessing on him?”

Because of our time in Southern California and Arizona, I have literally met hundreds of undocumented people, who came into this country simply to make a better life for themselves. They’re hardworking. They do jobs that most United States citizens will not do, and yet, more often than not, they’re thrown into a bucket of “undesirable” and labeled with things like “criminals”—and they live their lives in fear. And I ask myself the question, “Where is God’s blessing on them?”

And a few months ago, being a runner myself, I was drawn to the story of a young African American man running through a rural neighborhood who was shot and killed because he looked suspicious. And in the bottom of my heart I cried, “Where is God’s blessing on him?”

But when you look into Scripture, and you look beyond what Jesus said, and you look and watch what he did, one of the first things that jumps out at you is that Jesus had this incredible gift of accepting everyone as they are, regardless of their background. You contrast this with the society of his day, where political and religious leaders were either oblivious or simply ignored the marginalized. Religion was defined by laws and people were separated and treated differently because of their race, income and social status.

Does that sound familiar? I have given more sermons on Jesus’s view of religion in his day, but I wonder today, what does Jesus think about the church? Especially here, in the United States of America. Jesus was drawn to the poor and the marginalized. He was known as a friend of sinners. But you need to notice that Jesus never gave himself that title. It was a title that other people gave him.

Even his disciples struggle with some of his intent. Judas was upset about what he perceived as wastefulness, and Peter had nothing to do with the cross and suffering. The parable of Lazarus (Luke 16) should be troubling to all of us. The story includes a very rich man and a very poor man. The rich man, living in a palatial palace and had everything. The poor man was hungry, covered with sores. In fact, he was so hungry he was longing for scraps off of the table of the rich man.

Upon their death, Lazarus went to paradise and the rich man went to Hades. But it’s important to notice that it wasn’t anything that the rich man did that brought condemnation. Rather it’s what he didn’t do. He didn’t even notice the poor man. The story closely parallels the parable of the sheep and the goats. And to some extent, that of the Good Samaritan. Jesus, even when he taught his disciples to pray, he stated, “Thy kingdom come, thy will be done on earth as it is in Heaven” (Matt. 6:10).

You see, it’s more than just simply getting people saved from Hell to Heaven. It’s about his transforming work within the lives of his people, literally bringing his kingdom to earth. He laid the ground rules of his new kingdom with the words, “A new commandment I give to you. Love one another. As I have loved, you must love one another” (John 13:34).

The apostle Paul certainly understood this. We read 1 Corinthians 13 many times, but it is more than a passage to be read at weddings. It’s a manifesto of unconditional love. Paul wrote to the church at Galatia that was struggling with self-righteousness. Now, I want you to understand this is Paul’s words, not mine:

You see, if you really want to see Jesus, you need to go to the poor, the marginalized, the broken, the hurting people of the world and there you will find him in their midst. James said, “Real true religion from God the Father’s perspective is about caring for orphans and widows suffering needlessly and resisting the evil influences of the world” (James 1:27).

Our mission, as The Salvation Army, demands action. That we preach the gospel of Jesus Christ, a message of hope, restoration, rehabilitation, reconciliation, love, forgiveness and grace, and to meet human need in his name without discrimination. You see, the need is the call. We do not do one part of the statement to lead to the other part.

We don’t meet human need in order to qualify us to preach. We don’t meet human need with a hidden agenda. Meeting human needs and loving people as they are is preaching the gospel of Jesus Christ. I grieve that in many parts of the Army world today, we have left the meeting of people to those other than us who wear the uniform and have said, “We do” to the following:

Do you regard it as your duty to bear witness every day? To strive to lead all persons to the only Savior, and for his sake to care for the poor, to feed the hungry, clothe the naked, love the unloved and befriend those that have no friends? And the instruction that Peter received following each time he asked him on the seashore, “Do you love me?” He said, “Take care of my sheep. Take care of my people” (John 21).

My prayer for the Army, and for today, especially you Messengers of the Kingdom, is that we never lose our passion for the poor, the marginalized, the neglected, the hurting. They are our flock. The world needs us to be the movement God inspired a young Methodist minister to be over 150 years ago. To be literally the hands and the feet of Jesus and to love the unloved.

William Booth’s theology was correct. If you want to bring people into a right relationship with God, they need to see Jesus. And the only Jesus many people will see is you. And so my question, Messengers of the Kingdom: Will people see Jesus in you? And the answer will be revealed in the days ahead. If we want to be a blessing to others, it’s not about what we have. But in the words of Jesus, it’s what we give to others. I ask you to live up to your name and I ask the audience to do the same.

Hear Commissioners David and Sharron Hudson share what it means to do good on the first episode of The Do Gooders Podcast.