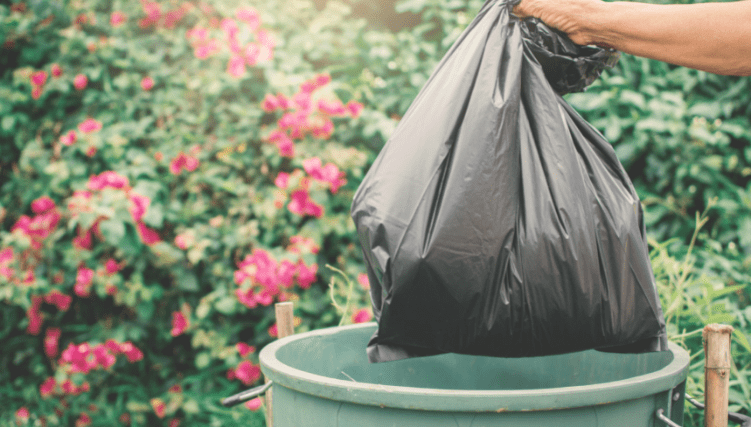 I’ve had days like that. Occasionally, I will have such a tumultuous day or series of days where it seems that every single thing goes wrong. Maye you can relate. Sometimes young people use slang to proclaim something negative, such as “garbage” or “trash.” I want to share with you about a garbage day I recently experienced and how the Lord changed my perspective through his Spirit and his Word.

One of the programs I oversee had an ongoing issue with our local trash pick-up service and the dumpster getting emptied as scheduled. I spent two months trying to get the mess straightened out. Recently, I had been feeling like the entity that was bringing the issue to my attention felt like I was the one dropping the ball. I was taking it personally because I had been on top of the issue, but it wasn’t apparent based on the overabundance of trash that had piled up that week.

There were also other issues that were weighing heavily upon me that day which added to my personal pile of garbage and by the end of it, I was ready to take out the trash! Garbage seemed to be a proper metaphor for how I felt the day’s events were panning out, and so if I had my way, I would have balled the day up and thrown it in the trash.

Behind the scenes: Jesus had bad days too

One of the things the Spirit reminded me of when I had experienced a trash day, was that Jesus had bad days too. Specifically, I recalled when Jesus heard of his cousin John the Baptist’s martyrdom. In Matthew 14-15, we find the series of events that occurred after Jesus and his disciples learned of John’s death. We find that Jesus longed for solitude after he heard the news.

As soon as Jesus heard the news, he left in a boat to a remote area to be alone. But the crowds heard where he was headed and followed on foot from many towns. Jesus saw the huge crowd as he stepped from the boat, and he had compassion on them and healed their sick (Matt.14:13-14).

The first thing that stood out to me about Jesus’ response was that he didn’t stop doing what he was called to do just because he was dealing with a heavy burden. The Scripture says that he had compassion for the people. If we are to read on in this chapter, we find that Jesus’ time was quite occupied by the needs of others. The crowds followed him eager to hear a message from God. The disciples brought to him the conundrum of feeding 5,000 people with no money and only five loaves of bread and two fish, yet Jesus makes it happen—in abundance.

How do you respond to difficult days or bad news?

When I am having a “trash” kind of day, it doesn’t negate the fact that I am called to meet the needs of others. I will often continue going about my day making sure that I am accomplishing program tasks and serving others. I might seek out a little time to vent to a trusted friend about the kind of day I’m having. I don’t let what’s going on around me stop me from getting the job done, but the garbage still piles up in my mind and my heart. When the dumpster debacle was happening, I texted a friend and said, “This day is trash!” I looked for an opportunity to complain and express my frustration, but I didn’t make an effort to change my attitude about it.

The Scripture shows us more examples of how Jesus responded to the horrible news that he had received. He once again seeks solitude, but as he goes off to pray, he is interrupted by a dangerous storm that threatens the safety of his disciples. Their faith is tested, and Jesus comes to the rescue. After all of that, Jesus is confronted by angry Pharisees and he puts them in their place. He directs his attention to the crowds that followed him, “Listen,” he said, “and try to understand. It’s not what goes into your mouth that defiles you; you are defiled by the words that come out of your mouth” (Matt. 15:10-11).

Heart Check: What are some of the words that come out of your mouth when you’re having a bad day?

Ouch! What Jesus said really pierced my heart. He endured so much while trying to process the news of his cousin’s death, and yet if we were to continue reading, we would find that Jesus continued to teach, heal, bless and perform miracles—and he does all of it while grieving the loss of his cousin, dealing with the hurt caused by his disciples’ lack of faith and addressing the judgment inflicted by the Pharisees. He soldiered on. He continued the work and mission that God had called him to without complaint, and here I was grumbling about a minor inconvenience with negativity and anger.

What stands out to you most about how Jesus responded to difficulties he experienced that day?

Sign up for the Do Good Digest, our weekly newsletter, and stay tuned next week for part two. Download the full study in our Scripture Study Collection.

Captain Christin Fankhauser, MSW, is the Corps Officer of The Salvation Army Everett Corps in Everett, Washington. She serves with her husband, Caleb, and together they have a daughter.