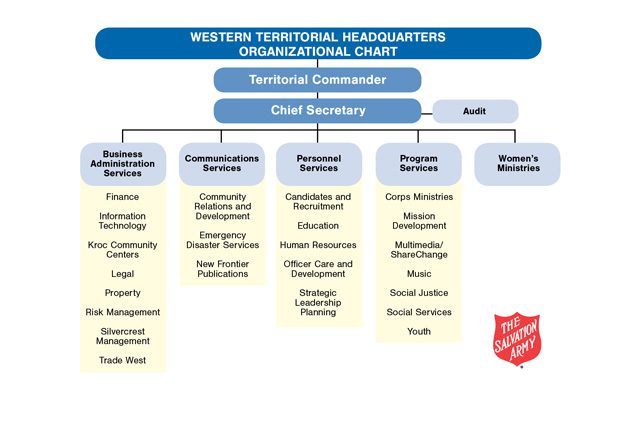 The Western Territory has a new impetus for effective communication following the creation of a territorial section to focus the territory’s message.

“The Communications Section is an outgrowth of both the advice of our Territorial Advisory Board and the proliferation of channels through which The Salvation Army has to get its message out. We simply have to reorganize,” said Territorial Commander Commissioner Kenneth G. Hodder. “We need to have those responsible for communications within our current structure create a product greater than sum of its parts. By bringing together pieces of existing sections, we create one powerful force.”

The section—approved by International Headquarters as the first of its kind in the U.S.—initially comprises the territory’s Community Relations and Development, Emergency Disaster Services and New Frontier Publications departments, formerly in the business section.

“This is not an isolated change,” Hodder said. “The Salvation Army in this territory recognizes its need to modify the way it functions in light of the environment in which we find ourselves. This is not the last time this is going to happen because the Army always displays its ability to adapt—culturally, financially and organizationally.”

The section is tasked with broadening the reach and depth of the Army’s message, Hodder said. The goal is threefold: to reach more people with the message of the Army and ensure broad understanding of current efforts; relay a focused, coordinated message across platforms for both internal and external audiences; and deliver a higher level of engagement.

“Its productivity and impact will be measured by the territory having more volunteers at the kettles, having more and stronger advisory organizations, and the degree to which soldiers are more aware of what’s happening across the territory,” Hodder said. “Officers, soldiers and friends of the Army need to be equipped with the information they need to help them create relationships—that is key to the Army’s success.”

The section will be led by a Territorial Secretary for Communications—a senior reserved appointment that requires the occupant be approved by the General. Hodder appointed Lt. Colonel Kyle Smith as its first leader, noting that there is no one better equipped to convey an exciting, pointed message.

“We have to be able to share The Salvation Army message with everybody—from members to supporters and those who need to hear it—and deliver it in a way that captures their attention so they want to learn more,” Smith said. “If we don’t, someone else will and we’ll be drowned out. So this new section is an acknowledgement of how important it is that we get it right.”

As part of its focusing effort, the territory hosted its inaugural Communications Summit in Long Beach, California, Aug. 27-28. With leaders from the territory and representatives from various disciplines in attendance—from multimedia to public affairs, Emergency Disaster Services, and planned giving—the summit focused on notable communications challenges facing the territory and how to collectively strategize to overcome them.

Each department shared its communication goals, challenges and successes before representatives from The Richards Group, The Salvation Army’s national branding agency, highlighted communication practices that the territory ought to stop doing, keep doing and start doing. The ideas were referred to the Communications Working Group, which meets monthly at THQ, to create recommendations for territorial administration.