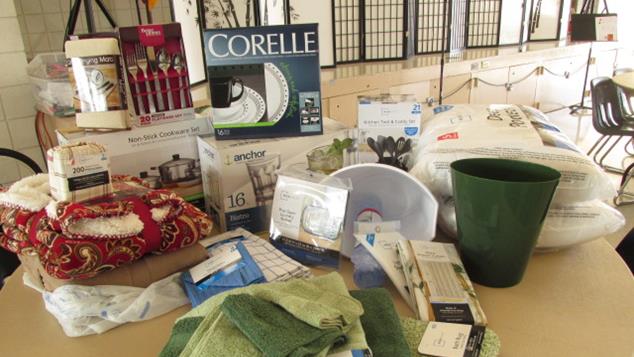 A big challenge veterans face is reintegration into society and although government help is available, some need an extra push to be able to move forward with their lives. That is where The Salvation Army comes in.

“Any veteran faces challenges in reintegration, as there’s a whole lot of criteria that determines if they’re going to be able to get any financial support from the military,” said Gail Crandall, social services director for the Long Beach Citadel Corps. “While there’s HUD-VASH, who helps them get the Section 8 [housing] voucher and there’s support services that will help them come up with move-in deposits or utility payments, there is really no financial support to help them furnish the apartment or get the things they need to really get their life going.”

Crandall was working with U.S VETS in Long Beach, Calif., an organization providing housing and resources to veterans, to give them vouchers to the Army’s family stores to purchase appliances and furniture for their new homes. However, after meeting with a group of female veterans, she found out that most of them did not have plates, silverware and many other basic necessities.

“I was pretty upset because I was thinking, ‘Well here we are helping them with a refrigerator or a stove and they need so much more basic stuff,’” Crandall said. “I felt kind of like I had been living under a rock; like maybe I should have been more aware that this was the case.”

Crandall then made a list of items from Walmart, including dishes, glassware, flatware, pots and pans, cooking utensils, bath towels, pillows, pillowcases, blankets, and a $25 gift card. She priced the items out to $250 with an additional $300 Salvation Army Family Store voucher and from this developed, “Welcome to Your New Home” kits.

The Downtown Long Beach Lions Club had expressed its willingness to help out the corps. Crandall sent them a request to financially support the program, and received $7,500 to get it started.

“The Welcome Kit really eliminates the stress, and it takes a bit of pressure off of [the veterans],” Crandall said. “We could give them a voucher and say go get silverware from the thrift store, but by giving them stuff that’s brand new, it’s sort of symbolic of the brand new life that they’re trying to start.”

When veterans took their voucher to the Long Beach Adult Rehabilitation Center (ARC), Crandall said whatever the veteran needed, he or she got for the $300.

“They’ve really just gone the extra mile, and really joined and partnered with us to make this program really effective,” Crandall said.

The kit is primarily directed toward female veterans and veteran families, as there are fewer resources available to them. However, Crandall said that they do help some male veterans and hopes to expand the program to include all veterans that need the help.

Veteran Cynthia Ford had been homeless for eight years when she reached out to The Salvation Army for help.

“The military provided a great career, but at the same time, when struggling times did come in life, a little help could have prevented a long journey of despair,” Ford said. “So you just go out into the world and try to deal with them.”

While Ford had received the government housing voucher, she could not afford the move-in deposit. The Salvation Army provided her with all the connections and referrals so that she could move in to her new home.

“The government veterans program alone was not going to do it; they gave me the [housing] voucher, but no assistance was offered as far as helping you get in there,” Ford said. “I probably wouldn’t have been homeless if I had been aware of The Salvation Army.”

Ford received her Welcome Kit and family store voucher, with which she purchased a dining room set.

“I couldn’t believe it,” she said. “I expected some help, but this was unbelievable.”

Crandall said that after making sure the veterans settle into their new homes and receive their kits, she remains in contact with them for at least a year and invites them to other church programs. She is also working with California State University, Long Beach students to develop a support group.

“Every veteran deserves to have that fresh start and to feel loved in the process,” Crandall said. “We just hope and pray we can keep it funded and turn it into a program that will be around for a really long time.”