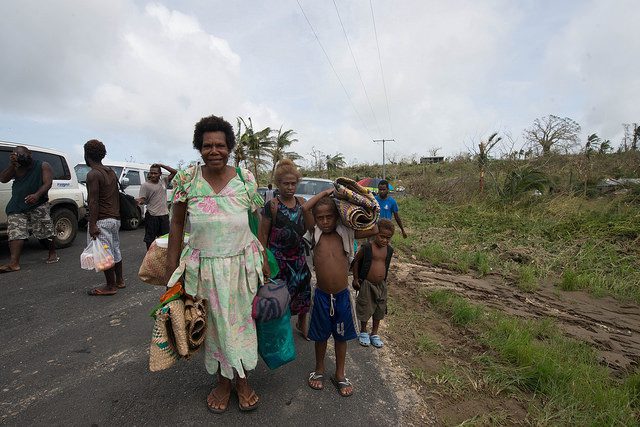 The Salvation Army is working to meet need in three hard-hit islands.

A month after Cyclone Pam devastated the south Pacific archipelago nation of Vanuatu, The Salvation Army continues to respond across three of the affected islands.

The latest government and non-governmental organization (NGO) assessments show that up to 180,000 people are affected by the disaster, from property damage to many communities reporting less than three days of water available, yet The Salvation Army is working within the coordinated NGO and government system to provide much-needed assistance on the islands of Efate, Tanna and Aneityum.

International Emergency Services, based at International Headquarters in London, is coordinating the response on Vanuatu working in conjunction with local Salvationists and complemented by deployees from Australia Eastern and Southern Territories, USA Eastern Territory and the United Kingdom Territory with the Republic of Ireland. A number of Salvation Army territories have promised financial support.

On Efate, hundreds of tarpaulins and ropes have been distributed to 357 families. Another 150 families were given longer-term assistance in the form of hardware vouchers to purchase supplies to restore and repair their own homes. Hygiene kits and food have also been distributed, and schools are being assisted through the reconstruction of latrine and sanitation facilities and the replacement of school books. A three-month nutrition program at a boarding school has enabled the waiving of fees. Seedlings are being grown to help re-establish community gardens.

On Tanna, The Salvation Army assisted with the distribution of 11 tons of food to some of the most remote parts of the island. Three villages have had their water supply reconstructed, providing 950 people with access to safe drinking water. Household supplies have been replaced for 200 families and the team is currently working on re-establishing access to fishing grounds and replacing fishing equipment for three villages. Seeds will soon be delivered to assist in replanting lost gardens and the imminent provision of jerry cans will help community members to transport water from communal sources to their homes. Long-term plans include the rebuilding of homes in the remote north-west of the island.

On Aneityum, The Salvation Army is working with the local boarding school to ensure that children can remain in school, through a “Food for Fees” program. This will see The Salvation Army supplying the food needed by boarders in exchange for a fee remission for their families. Given that most of the island income is generated from cruise ships that are no longer visiting since the cyclone, this is a much-needed relief for the families and keeps the children in school.

The Salvation Army’s fledgling presence in Vanuatu, which began only three years ago, has had its profile greatly raised by the presence of the International Emergency Services team, members of which will continue to work for a number of months to come.