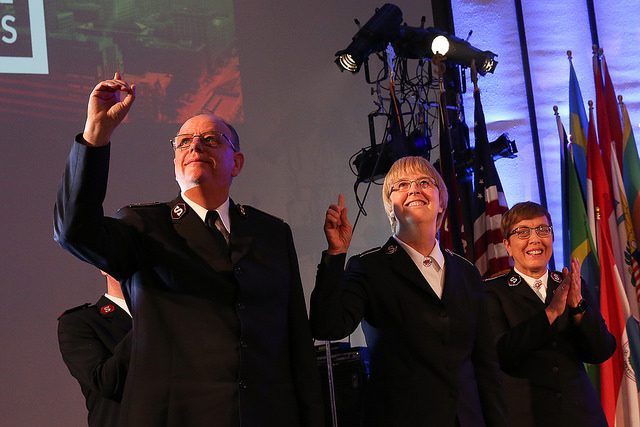 Unity and diversity recognized at ICL 2017

At the conclusion of the 2017 International Conference of Leaders (ICL)—held in Los Angeles—World President of Women’s Ministries Commissioner Silvia Cox invited everyone to rejoice. Salvation Army leaders from around the world had considered a number of issues during the preceding week—a week that began with Chief of the Staff Commissioner Brian Peddle querying: “Are you listening?” and concluded with General André Cox asking: “What are you hearing?”

Early in the week facilitators trained in Faith-based Facilitation—drawn from the International Moral and Social Issues Council and the International Theological Council—helped delegates converse about issues that differ across the world. Through this, the leaders gained a greater appreciation of one another’s cultural perspectives—necessary to guard the moral authority and doctrinal integrity of the international Army—when framing Orders and Regulations. There was also an introduction to the format of the rewrite of Chosen to be a Soldier (Orders and Regulations for Soldiers). Feedback was positive while reflecting the many ways people now get information and the need for a multi-format response.

One of the emerging challenges confronting the Army is where national laws restrict the role of expatriate personnel or the way that The Salvation Army is registered to legally work within a country. To help delegates understand the constitution of The Salvation Army—framed in British law—and its impact on how the leaders operate within their own territories and commands, Richard Clark presented a comprehensive outline of the Army’s legal framework. Having worked for the Army’s legal advisers in London for more than 30 years, he was well placed to speak and answer questions on this subject. In a later session, delegates explored the importance of developing leadership for the years ahead, considering succession planning and capacity building.

At the week’s end, the General posed the question: “What are you hearing?” Leaders agreed that they need to create space and freedom for people to explore a range of relevant issues within their territories and commands.

“We have become more acutely aware that the contexts in which we live and work are not the same, and one solution to an issue will not apply across all contexts,” the General said. “We must also guard the fact we are one body, and each part matters.”

Finally, while no formal recommendations came from the conference, it was apparent that there was much for which to thank God. It was apt, then, that the final worship session was themed “rejoice’”and the General’s message centered on hope.