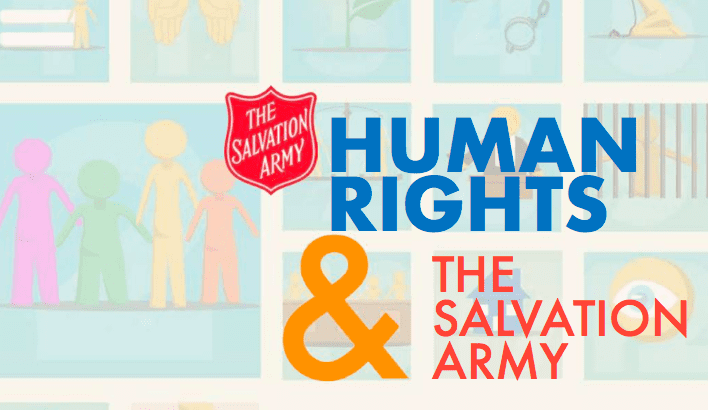 This month marks the 70th anniversary of the Universal Declaration of Human Rights (UDHR), signed on Dec. 10, 1948, in Paris. This year, around the world, events have been held to mark the anniversary.

A few months ago, I was in Sao Paulo, where The Salvation Army in Brazil arranged a symposium to consider the future of human rights in the light of Christianity, migration and refugees, violence against women and human trafficking. As one of the speakers, I asked a provocative question: “Happy 70th birthday human rights—will you survive the 21st century?”

In recent years we have witnessed the rise of populism and me-first politics. It is no longer crazy to ask if human rights is fit to be the glue that binds together the world’s laws, politics and morality. Nations may want human rights for themselves and their friends, but there is declining concern for minorities and foreigners. An increasing number of politicians are distancing themselves from the concept of universal human rights and prefer to talk of national rights. Slogans such as “America First” undermine the foundations of UDHR.

We are living at a time in world history where, according to Larry Cox, the former Deputy Secretary-General of Amnesty International, “increasingly interconnected global economic and social systems relentlessly and ruthlessly are creating truly obscene levels of riches, privilege and power for a tiny minority of mostly men. At the same time the income most people need to survive has stagnated or dramatically declined for decades.”

Many parts of the Christian Church have aligned with the UDHR. Pope John Paul II, when he addressed the UN General Assembly in 1979, defined it as “a true milestone on the path of humanity’s moral progress.” And in 1968, The Salvation Army published the first version of “Human Rights and The Salvation Army.” General Frederick Coutts wrote in the foreword: “In Human Rights Year, Salvationists are identified with the high ideals of social justice and acceptance as the unchallenged right of every man as stated in the Universal Declaration of Human Rights.”

However, in recent years the embracing of human rights by Christians has become controversial. The Judeo-Christian foundations on which the UDHR was built have been eroded, with one of the reasons for a crisis of confidence in those rights being the problem of how they are defined. We can no longer simply point to the 30 articles in the UDHR as the definition of human rights because, over 70 years, they have developed into a multi-faceted, comprehensive way of thinking and living. Many new treaties—human rights instruments—have extended the meaning of those rights and the scope of human rights law. Human rights discourse is now viewed by some of its critics as “nothing more than individualism, secularism, and Western political imperialism in disguise,” as Linda Hogan notes in “Keeping Faith in Human Rights.”

I argued in my four lectures in Brazil that human rights needs religion to survive the 21st century. This is not the moment for Christians to give up; in fact, we must raise our voices. The future of human rights depends on people of faith promoting a richer, multi-layered appreciation of what it means to be human. Christians believe every person is made in the image of God. We are integrated beings of body-soul-for-relations. Every person is created for a purpose that lasts into eternity.

With this appreciation of what it means to be human, we are better able to understand human rights as part of God’s gift to the world. An emphasis on rights and duties points to the importance of relationships for the future of human rights. Since the earliest days of the Church, Christians have believed that those of us with power—and that is most of you reading this—must be willing to give up some of our privileges for the benefit of the weak. This view is supported by “The Salvation Army Handbook of Doctrine” that states: “Humanity is a special part of God’s good creation. Therefore we must learn to value the worth of all human beings as having been made in the image of God (Genesis 1:26-27; Psalm 8:5). God will hold us accountable for how we live: in community, in relationship to all living creatures as well as to the whole of our natural environment. This knowledge will shape our moral choices and our stewardship of creation.”

This is the key point when we consider human rights. Relationships matter. Our choices matter. Not just our relationships with those we know but also relationships with foreigners. Understanding ourselves as relational beings helps us make better moral choices and be good stewards of creation.

This commitment to live in relationship is at the heart of the covenant made by every Salvation Army soldier. The Soldier’s Covenant states, “I will maintain Christian ideals in all my relationships with others: my family and neighbors, my colleagues and fellow Salvationists, those to whom and for whom I am responsible, and the wider community.” The Universal Declaration of Human Rights gives us a framework that brings to life our covenant promises.

If the purpose of human rights is only to enable autonomous, rational individuals to have what they deserve, then human rights needs to die. However, if human rights can recapture a priority for the common good and use a rights-based approach grounded in relationships, then we all need to fight for human rights to flourish.

To mark the 70th anniversary of the Universal Declaration of Human Rights, the International Social Justice Commission and the International Moral and Social Issues Council produced a new version of “Human Rights and The Salvation Army.” This year also marks the 10th anniversary of the formation of these two bodies. In the foreword to the 2018 version, General Brian Peddle issues a call for every Salvationist to become a defender of human rights:

“When we consider current events in our world—the mass migration of refugees and asylum seekers, uncovered historical abuse, the need for campaigns like #metoo, gun and knife crime, human trafficking—this 70th anniversary provides an opportunity to pause, reflect and recommit ourselves to work for a better world where every person is valued, respected and protected. As an international movement we encounter individuals daily who are deprived of the human rights noted in the Declaration. The battle continues and I call upon all who read this publication to personally become a defender of human rights because ours is the voice needing to be heard right now, right where you are.”