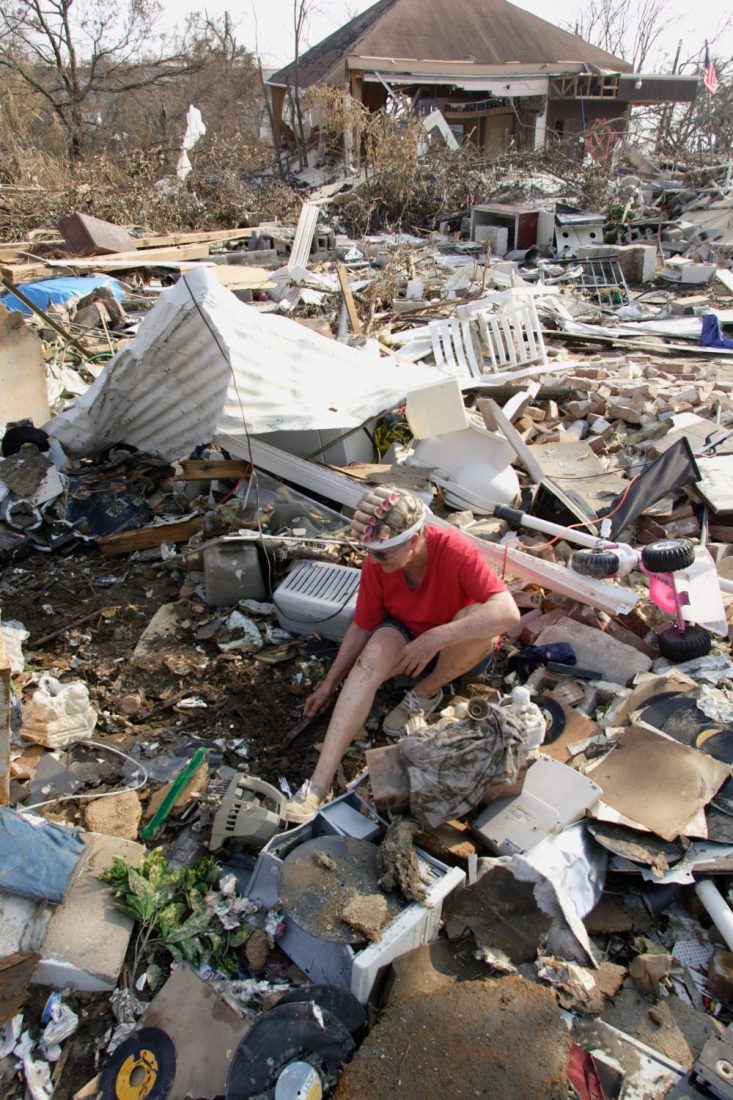 The changing nature of disaster relief

The Army has done much to modernize its approach in the last decade. But officials say more can be done.

A woman in Biloxi, Miss., picks through the remains of her home after Hurricane Katrina tore through the region in 2005. Katrina, along with the 1995 Oklahoma City bombing and 9/11 were milestone events with far-reaching consequences for the emergency response industry.

About 12 years ago, The Salvation Army New York disaster relief unit came to a crossroads. For years, the organization had developed a reputation for deploying its mobile feeding unit and a ragtag group of volunteers for every third-alarm fire—regardless of the quality of service or the need for service. It was time, they realized, to rethink the nature of their approach.

“We all agreed, look, we can’t continue to go with nice guys who want to flip burgers on a canteen. That’s not what this is about,” said Michael Orfitelli, territorial EDS coordinator for the Eastern Territory. “We would have been out of business if that’s where we’d stayed. Or we would have been relegated to a very, very small part of disaster.”

That’s because over the last decade the emergency response field as a whole has grown up into a multibillion-dollar industry, driven by “milestone” disasters like Oklahoma City, 9/11 and Katrina. The number of agencies working in the sector has ballooned, and the field has professionalized. Where disaster response training once meant taking a few FEMA courses and getting a certificate, there are now nearly 300 higher education programs in emergency management available in the United States.

The Salvation Army has worked hard to keep pace with the changes, developing a robust in-house training program, hiring more emergency management professionals, and better integrating its EDS division with the rest of the organization. It has also focused and realigned its efforts, partly by redefining what constitutes a “disaster.”

“We’ve sort of gone back to basics,” Orfitellii said. “We’ve said, look, let’s not just worry about major disasters. Let’s help people where they need help in the local community. If your house burns down, it’s still a disaster to you. Let’s do the local response thing really well, and we’re going to have a place in the major disasters.”

Together, these changes have attracted a higher caliber of volunteers, Orfitelli says. And raising the profile of the EDS division has helped it earn a seat at the decision-making table for the organization as a whole. Where they used to be seen as “the guys who run the canteens,” they’re now better integrated into the fabric of the organization.

All this has allowed the Army to redefine its traditional role in both small- and large-scale disasters. Following a building explosion in the East Village last year, a team lead by Zachary Hodgson, greater New York’s emergency services director, didn’t run for the canteen. Instead, they supported another organization that had contracted with the city to provide case management services for survivors. “We came in almost in a consultant role, and provided our subject matter expertise,” he said. The Army also supplied about $75,000 in direct assistance through its partner to help survivors purchase furniture and move into new housing.

Despite these positive changes, however, ongoing challenges remain. “Our potential to do more is enormous,” Orfitelli said, but the Army is severely understaffed. His territory is working on an initiative to expand disaster services in more communities as a collaborative effort across multiple agencies. “It’s going to rely now primarily on volunteers only, because we don’t have even a staff person to say, ‘I can shepherd that.’ From a staffing standpoint, that’s a huge, huge problem.”

Those kinds of challenges are partly why the industry has increasingly come to rely on private, for-profit entities to provide services that were once the purview of non-profit organizations. The perception among some, says Hodgson, is that the private sector is “just more accountable.” Philanthropic organizations are dependent on volunteers and funding cycles that affect their response capacity at any given time—even though nonprofits like The Salvation Army have developed trust in communities that can be difficult for private companies to match.

But as the overall number and severity of disasters continues to increase—due to climate change and demographic shifts concentrating more people in urban areas, where damage intensifies—the industry is placing a greater premium on efficiency, says Marsha Tamura, voluntary and private sector liaison for the Hawaii state Emergency Management Agency. At the same time, survivors are increasingly requesting a more comprehensive approach to help them recover from unprecedented disasters like Katrina. To meet those needs, she says, groups like The Salvation Army need to do a better job connecting with government agencies in her area before a disaster hits.

“That’s not something that’s muscle memory in the Army as yet, as well as [in] other NGOs,” she said. “It’s always easier if we know who we’re working with, so we can build trust and plan.” She believes better communication is needed as well, to clarify assumptions and expectations across all sectors—government, nonprofit and private—and help facilitate a more effective response.

Hodgson agrees. “The residents of New York City are best served when the public, private and nonprofit sectors are all balanced and well-coordinated, because none of those sectors can deal with all of the disaster-related needs on its own.”