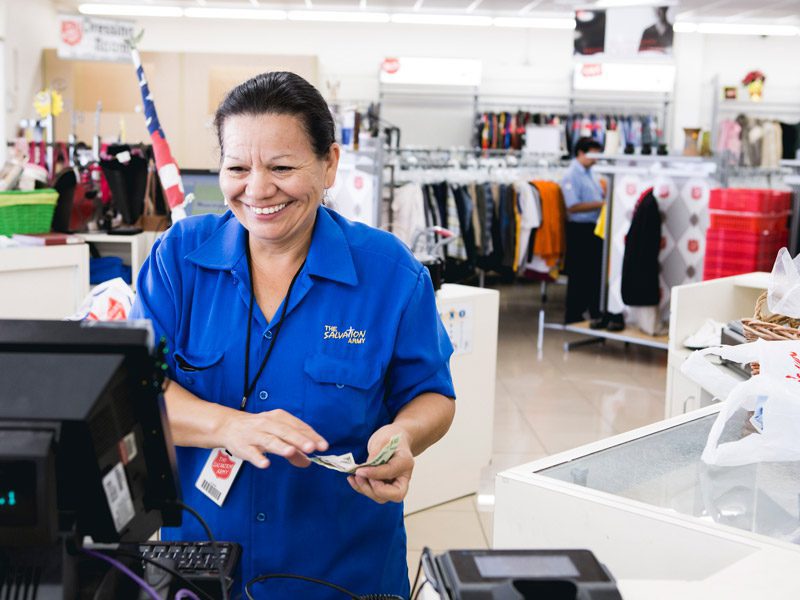 Across the country, thrift sales fund rehabilitation through The Salvation Army.

Mike Beaudreau starts his day on the docks of the warehouse in Anaheim, Calif., at 6:30 a.m. He checks the trucks, and looks over 14 routes his drivers will take that day to pick up goods donated to The Salvation Army—an average of 300 stops throughout Orange County. 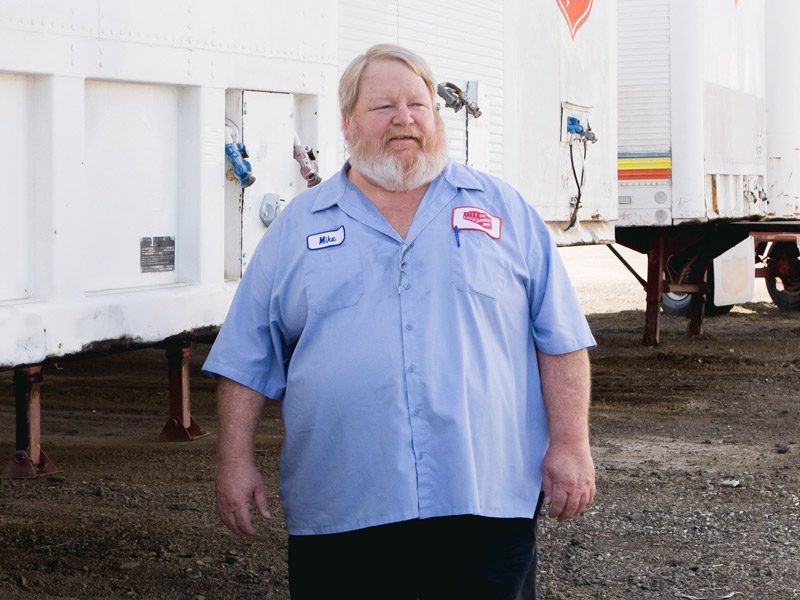 “I’m the guy you call when you need something done, or when you have a problem,” said Beaudreau, transportation supervisor, who has worked at the Anaheim Adult Rehabilitation Center (ARC) for more than 20 years. “I’ve been around so long and overseen so many aspects, I think I’ve seen it all.”

He’s a model of success for the center, which processes goods in its 100,000-square-foot warehouse and sells an average of $950,000 in goods per month through its nine area family stores. In turn, the operation funds a residential recovery program for 170 men and women.

The Anaheim center is one of 141 centers across the United States, all of which sift and sort the public’s donations that are then sold in 1,226 family stores nationwide. Last year, the stores recorded nearly $626 million in sales to the public, according to the Army’s 2015 annual report—money that in turn funds a cost-free, biblically based six-month program to overcome addiction for more than 200,000 people a year. 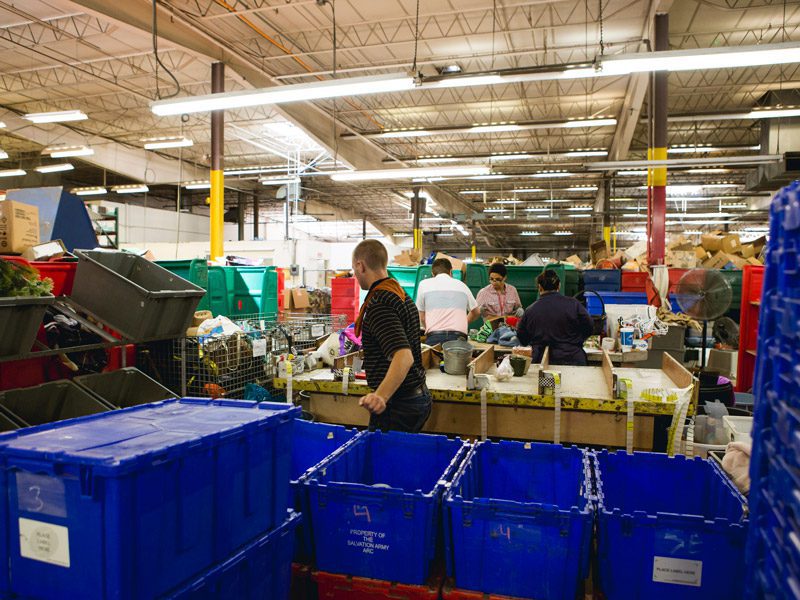 Beaudreau started as a beneficiary, court-ordered to rehabilitation with The Salvation Army.

“I was pretty mixed up and messed up, and The Salvation Army saved my life,” he said. “I learned to suit up and show up—to go to work every day and give 100 percent. I learned to be respectful and respected.”

He said smoking cigarettes in seventh grade began what would later become a cycle of drug use and jail time, as he was both addicted to and dealing methamphetamines. “From the start my parents taught me right from wrong, but I repeatedly put myself in the wrong place at the wrong time,” he said. “I knew I was doing wrong, and I was so tired of the life I was leading. I was tired of having to lie to my family, and to myself that I would ‘just try it one more time.’”

When Beaudreau stood before a judge in 1994, with a suspended sentence of six years, he said he knew if he didn’t complete The Salvation Army’s addictions program that he would be back in jail.

“It was a scary thing for me, but when I eventually turned my heart over to God, from then on I knew that if I did the ARC program as prescribed, that God would lead me in the right direction,” he said.

The Army opened its first “cheap food and shelter establishment” in the U.S. on Dec. 23, 1891, calling it “Our New York Lighthouse.” It could accommodate 36 men, and those who were penniless were given food and shelter in exchange for the promise of two hours work in the morning—washing dishes, cleaning up, or chopping and sawing firewood. This premise developed into the ARC program, which today provides spiritual, social and emotional assistance to men and women through residential housing, work, and group and individual therapy—with no government funding. 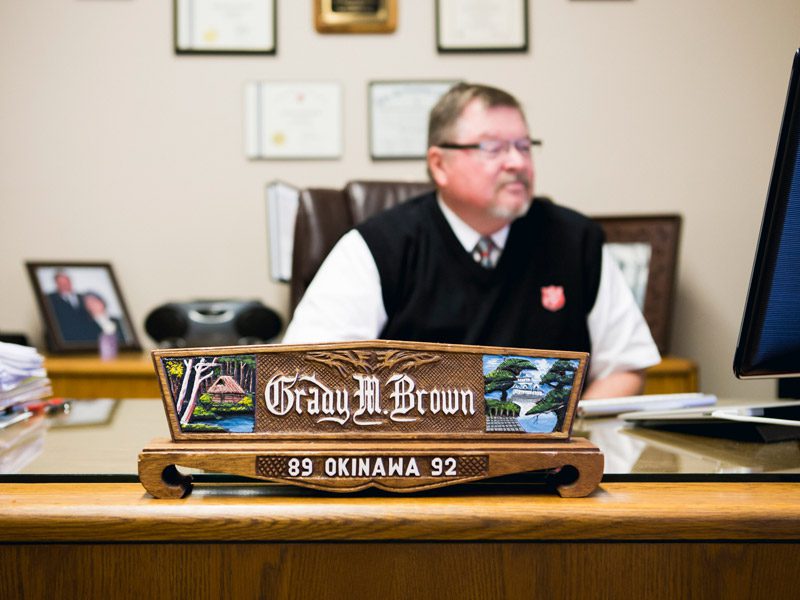 “We’re a spiritual recovery program, all funded through store and recycling and dependent on in-kind donations from donors,” said Major Grady Brown, administrator of the Anaheim ARC. “Grace is a big thing here. We need the strength only God can provide. The stores make it happen, but the focus is on what we produce spiritually.”

Any able-bodied adult age 18-60 can participate in the free, 180-day residential rehabilitation program.

That individual is “a person, an object of care, official and personal, an agent capable of self-improvement—a client!—a bum no longer, no so soon to be a corpse as the man himself originally imagined—a Man, a Brother to Somebody, somewhere, at last,” wrote author E.H. McKinley in “Somebody’s Brother: A History of The Salvation Army Men’s Social Service Department, 1891-1985.”

“The Army began in this country as a straightforward evangelistic crusade…Its early and rapid expansion—by 1890 the Army had spread across the country, with 410 corps [churches] in 35 states—can be explained almost entirely in terms of its simple orthodoxy and its colorful and attractive means of propagating it,” McKinley wrote. “The Army, then the church, was called to be the rescuer of the cold-water flat, the fire-escape, the street corner and the saloon—the devil’s strong refuges.”

“Two distinctives make our program successful—the spiritual aspect and the work therapy,” said Nelson, who noted the program’s 30 percent graduation rate. “A big part of drug rehabilitation from an AA standpoint is having spiritual awakening, and coming into relationship with Christ is the ultimate spiritual awakening. Work therapy is important because we were created to work and to create. Without that aspect in our lives we don’t have the meaning that we’re meant to have.”

In the Anaheim warehouse, the work therapy is a detailed operation.

Walking by posters of puppies, ironing boards, and golf clubs, Brown points out the warehouse’s divisions: home goods, furniture, appliances and small electronics, garments, accessories, mattresses, and bicycles. Roughly 500 online book orders are processed each day. Forty vehicles are for sale in the lot, near several hundred others that will be sold for parts.

Clothes account for 40 percent of the warehouse’s sales, and beneficiaries and staff process 12,000 pieces of donated clothing each day. One out of three clothing items is tagged with a size and price, and racked for transport to a store.

“We put thousands of new products on the shelves every day, because we know that each one has a window of 3-5 days,” Brown said. “After that it probably won’t sell.”

Each week a different color tag is used so store staff can track the length of an item on display; after one week an item goes on sale. After a month in store, the item is recycled.

Community members such as Kathleen Owens, who first met the organization while dropping off a bag of clothing at a store near her house and now serves as an Anaheim ARC advisory board member, donate items—aiding in both the recycling of goods, and funding the rehabilitation program.

“I started talking to a man who showed me inside as the store was being remodeled, and it was beautiful. The floor was white marble, and everything was clean and looked great,” Owens said. “He told me about all of the things The Salvation Army does in our community, and I later sent an email saying I wanted to get involved.”

Owens, a financial advisor, prepared a financial plan for the Anaheim ARC, and said she was struck by the amount of every donated dollar that goes toward programs—84 cents. “To donate to The Salvation Army, you know that your money is used wisely,” she said. “And the added bonus in the ARC program is that the people who are manning the trucks and sorting the goods are finding a way to stay out of whatever got them into an unproductive life style.”

She and her 15-year-old daughter still donate and shop in the nearby family store—and they are not alone.

Resale is a $16 billion dollar a year industry. According to America’s Research Group, 18 percent of Americans will shop at a thrift store during a given year—not far from the 21 percent who shop in department stores.

The Anaheim ARC recycles donations that do not end up on store shelves. Damaged or worn clothing, for example, is sent to a massive baler, which turns clothing and cardboard into 1,100-pound bales that are sold to recyclers for 18 cents a pound. 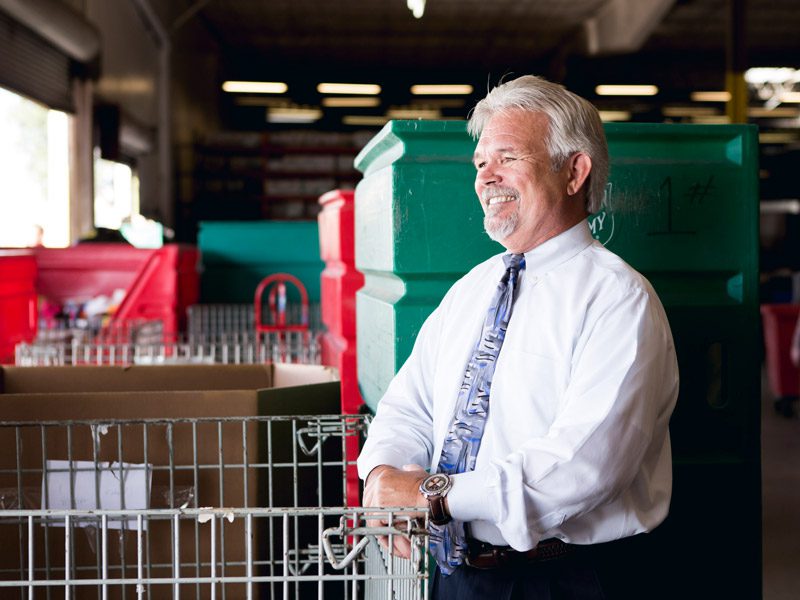 “I don’t think people have any idea how green The Salvation Army is between e-waste, rag sales, and recycling of metal and books,” said Frank Scott, Anaheim ARC operations director. “We’re the ultimate scavengers.”

While operations and efforts continue to grow, Beaudreau still takes to the loading docks each morning.

“Over the years I have seen the new guys come into the program.  They are scared, and some a little spun out as a result of coming off drugs,” he said. “It is a constant reminder of where I can be if I ‘just try it one more time.’” Through bouts with tongue cancer and a blood clot on his brain, Beaudreau has stayed clean for more than 20 years. He and his wife are members of the Anaheim Praiseworks Corps.

“I’m glad that I’m still here,” he said. “I enjoy seeing people change their lives and get it together, to work from the bottom all the way up to knowing they are being productive.”