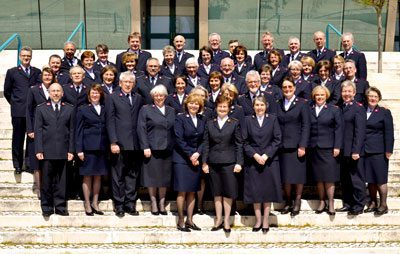 Spirit-Driven Unity in Evidence at Europe Zonal Conference in Portugal

Forty-two territorial and command leaders from across Europe – together with staff from the Europe Department at International Headquarters – gathered in the Portuguese capital, Lisbon, for the Europe Zonal Conference, under the leadership of General Linda Bond. The first event on the programme – a prayer meeting led by the General as part of the Thursday morning Worldwide Prayer Meeting – ensured that proceedings began in an atmosphere of prayer and Spirit-driven unity.

The General was supported by the new zonal leaders – Commissioner Birgitte Brekke (International Secretary for Europe) and Commissioner Dorita Wainwright (Zonal Secretary for Women’s Ministries) who contributed to the conference theme of ‘Leadership in the 21st Century’. Presentations focused on the challenges faced by the 12 territories and commands in the zone, as well as the opportunities presented by the decline in religious observance and the current financial crisis. Stories were shared of innovative programmes and spiritual growth in corps (church) and social service units in the 33 varied nations that make up the zone.

It became clear that all around Europe holistic ministry is offered in the name of Jesus but that The Salvation Army’s mission – especially to the marginalised and dispossessed – is being carried out in the face of increased secularism and materialism.

Highlights of the conference included the General’s insightful presentations on spiritual and practical leadership in challenging times. At the conclusion of her presentation on spiritual leadership there was a time of spontaneous prayer as delegates sang with conviction ‘My Life must be Christ’s Broken Bread’, giving strong emphasis to the words ‘resolved the whole of love’s demands to give for his dear sake’.

Commissioner Dick Krommenhoek (Territorial Commander, Norway, Iceland and The Færoes Territory) introduced a new song he had written especially for the conference – ‘Start Your Revival in Me’. Delegates enthusiastically practised the song in preparation for the final event of the conference, when Salvationists from all around Portugal gathered at Colares Corps near Lisbon for a combined Sunday meeting.

In words of welcome Lieut-Colonel Gordon Daly (Officer Commanding, Spain and Portugal Command) said that for a few days Lisbon had been the capital of Europe as Salvation Army leaders had gathered from all around the continent. He welcomed staff and clients of The Salvation Army’s social service foundation who had come to the meeting to mark the foundation’s 32nd anniversary.

The meeting featured testimonies by Colonel Eva Kleman (Territorial President of Women’s Ministries, Finland and Estonia Territory) and Colonel Patrick Naud (Territorial Commander, Germany and Lithuania Territory). The Europe leaders presented their new song ‘Start Your Revival in Me’, with its final refrain – ‘I can hardly wait to see your revival power in me’ – building to a crescendo of joyful hope. 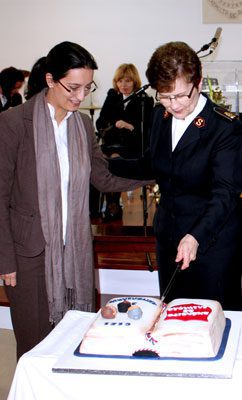 The General, with Mrs Sandra Martins, Director of Social Services for Portugal.

A Portuguese group presented a dance item and the meeting was marked by joyful singing and warm international fellowship.

In her Bible message the General focused on the need for restoration of love and hope in the hearts and lives of Salvationists. In response to her message, many people made their way to the mercy seat for prayer.

Following the meeting the General was joined by Mrs Sandra Martins, Director of Social Services for Portugal, and other staff for the cutting of an anniversary cake which was shared with the congregation.