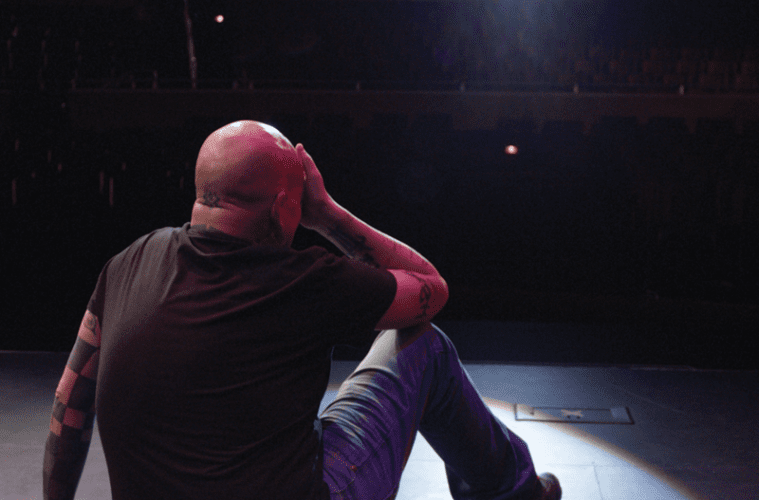 Video a vehicle for change in The Salvation Army

Captain J Koebel had told his story before, but this time was different.

The camera seemed cold. The crew was nice enough, but there was no audience to engage with. No reaction he could measure. He was skeptical of the idea. How would he know whether he was connecting or not?

That reaction would come later, in the form of hundreds of Facebook messages. When Koebel’s story, told through a six minute video, hit the internet, there was no denying that he had connected with people all over the country. By the dozens, they contacted him, asking for help or telling him how his story helped them realize Christ’s love.

“It was so much more than I ever expected,” Koebel said. “And as that week went on, it was messages upon messages. I just kept responding to them.”

The video detailing Koebel’s faith testimony—one of addiction and redemption—is one of dozens The Salvation Army puts out every year as part of its multimedia ministry in the West. The videos are a relatively recent form of evangelizing, but they’re rooted in The Salvation Army’s decades-long tradition of “open air” evangelism.

The medium has changed over the past century, but the message for the Army remains the same: creativity is key to connecting with others and spreading faith.

The tradition dates back to the very beginning with Founder William Booth. Booth used a motorcade to draw attention in the early 1900s. He’d preach on the street corners or lead a marching band down the street to the town square.

Those methods might seem odd or out-of-place in the 21st century—town squares even seem to be a relic, with society having fewer shared places to gather. But that doesn’t mean the practice of open air evangelism doesn’t have a place in today’s world. Instead, it’s taking a new shape and finding its place within social media.

“We have to not take these mediums for granted,” Koebel said. “Truthfully, we are losing our connections to young adults…This seems to be the medium we need to use.”

For the past five years, The Salvation Army has invested in spreading the gospel through online engagement and viral videos. Josh Cowing leads the department as director of multimedia ministries for the Western Territory.

“We love finding these old traditions of The Salvation Army and finding ways to bring them into the modern era,” Cowing said. “We’re getting to the root of what made them effective at spreading the gospel and trying to tap into that same root using modern means. It’s about sharing our stories with the world.” The mission is simple: connect with others outside the church by telling stories of lives that have been transformed as the result of an encounter with God, experienced through their involvement in The Salvation Army.

Koebel’s story is a perfect example of this. He’s shared his testimony before congregations for years, but recording it on video was a whole new experience. Still, the message resonated. More than that, it spread, as one by one, people clicked “share,” passing the video further out into the ether.

“We’re willing to share pictures of our food, or kids, or a silly cat video,” Cowing said. “I’m hoping we can understand we have the opportunity to do the same thing with some really good, kingdom-building material that someone might need to hear more than they need to see another video of someone falling off a stage.”

About 85 percent of the video content the team creates is documentary in nature, stemming from The Salvation Army’s rich history of people providing testimonials during services.

“It allows us to relate with them, to sympathize with them, to learn what they’re learning,” Cowing said. “It’s how evangelizing is meant to be spread, person to person.”

The videos do the same thing, he said. They’re about five minutes, on average, and usually focus on one person’s story, like Koebel. The team has produced about 75 new pieces over the past two years.

Koebel said emotion is usually a huge part of his testimony, and he was worried that wouldn’t be captured on screen. It seemed too difficult without a congregation to react to.

“It was just cameras in my face and really looking more internally to keep the emotion,” Koebel said. “But the crew did a great job of questioning and asking more to probe deeper in certain areas. They were phenomenal, really encouraging emotion.”

And that emotion came through vividly. Koebel’s story about his transformation from a life of drugs and addiction to a life of servanthood and leadership inspired countless people across the country, helping some connect with the church or find a rehab program. One of the men, Cowing said, needed help and wanted to check in to the same recovery program Koebel went through. Koebel didn’t just talk with the man—he drove to his city, picked him up, and helped him check into a program.

Connections like that are only possible, Cowing said, when people are willing to share the videos and connect with the people who need them the most.

“Let’s be intentional about what we share,” Cowing said. “Let’s let our online selves be a representation of our in person selves. If you believe Jesus can save you and transform your life, let’s not be afraid to share that.”

The important part isn’t just telling these stories, it’s making sure they’re shared with the people who need to hear them most. That means finding a way to connect with people outside The Salvation Army. To do that, the multimedia team relies on Salvationists sharing the stories on their personal social media accounts. What’s even better than sharing them broadly, Cowing said, is sending direct messages to friends with whom that video’s message might resonate the most.

Though all members of the church are called to share the word of the Gospel, some might be intimidated by having those direct, in-person conversations.

“One-on-one connection with someone is still vital,” Cowing said, “but this might be an easier first step than picking up the phone and calling someone out-of-the blue or confronting them in person.”