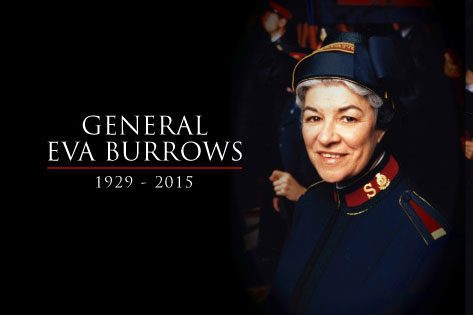 General Eva Burrows was remembered, celebrated and farewelled at Melbourne Town Hall, Australia, following her promotion to Glory on March 20 in a Thanksgiving Service for her life. Dignitaries from around Australia and the world, along with hundreds of Salvationists and members of the general public, gathered while thousands watched the service online.

Colonel Peter Walker, chief secretary for the Australia Southern Territory, welcomed the official party, after which Uncle Vince Ross brought the Acknowledgement of Country, saying that “The Salvation Army’s General Eva was his people’s ‘Aunty Eva.’”

Australia Southern Territorial Commander Commissioner Floyd Tidd gave a special welcome to General André Cox and Commissioner Silva Cox, world president of women’s ministries. The Melbourne Staff Band and Staff Songsters led and supported the congregational singing of songs selected by Burrows. Prayers were offered by Lt. Colonels Frank Daniels and Lucille Turfrey, followed by The Right Honourable the Lord Mayor of Melbourne, Robert Doyle, speaking with much affection and appreciation of his connection with The Salvation Army and with Burrows in particular.

Commissioner Beth Clinch read from the works of Dietrich Bonhoeffer, reminding those gathered that “what is so marvellous [is] that we can transform death.” Two passages of Scripture were selected for reading by Burrows: Exodus 33:12-18, read by her nephew John Southwell, and 2 Corinthians 4:1-7, read by Major Sandra Nottle. The video tribute that followed, voiced by Burrows herself, remembered the impact she had on the lives of people around the world.

Officer and family tributes followed. Major Brendan Nottle, Burrows’s corps officer, brought a personal reflection on the way that she would place her hand on a person’s arm and speak into their life, while Commissioner Brian Morgan, a former territorial commander in Australia East, spoke of her influence across the Army world. Brother-in-law Dr. Bram Southwell gave a touching tribute to this much-loved family member.

In his message, Cox said that despite him being the current world leader of The Salvation Army, in his mind Eva Burrows was “The General.”