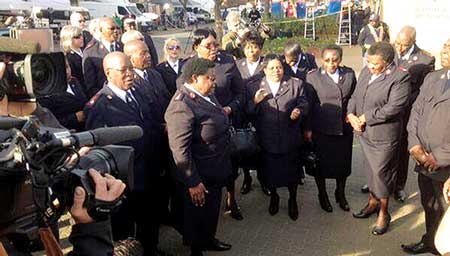 Singing and praying outside a hospital room in Pretoria, South Africa, a crowd of Salvation Army officers from the Southern Africa Territory made intercession for the ailing former South African President Nelson Mandela.

The group, which included Territorial Leaders Commissioners William and Thalitha Langa and Chief Secretary Lt. Colonel Robert Donaldson, prayed for the former leader, asking God to “bless the former president and his family.”

After placing flowers at the hospital gates, they stood outside his room singing, “In Thee, O Lord, Do I Put My Trust.” Addressing the crowd of media and onlookers, Langa explained that The Salvation Army wanted to show its support to “Madiba’s”—as Mandela is affectionately called—family and assure them that the Army would be praying for them. He spoke of Madiba’s struggle to bring freedom and peace to South Africa. His message to the ailing anti-apartheid leader was to lift up his head to God and be encouraged.

In conclusion, the officers sang a traditional African hymn.