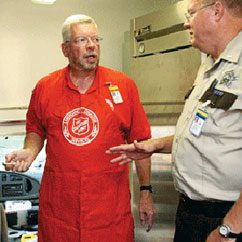 The attacks of Sept. 11, 2001 had occurred four months earlier, yet bodies were still being discovered. Daly’s job was to serve food to relief workers and government officials at a morgue set up to identify victims’ bodies and body parts through DNA matching. For two weeks he worked from 11 p.m. to 7 a.m., serving late-night dinners and breakfast to an average of 100 people per shift.

“It was very…sobering isn’t even the right word,” said Daly, a retired Ramsey County Sheriff’s Office lieutenant and 10-year volunteer for the Twin Cities Salvation Army. “When I was there, they had found a pocket (in the rubble) that contained a lot of police officers. Every time they found a body, all the work would stop at the pit and they’d have a processional.”

The Salvation Army was the first relief agency to reach Ground Zero, reporting within a half-hour of the first plane crash at the World Trade Center. The Army was granted full control of feeding operations at the site until May 2002, when cleanup at Ground Zero officially concluded. In that time, The Salvation Army served 3.2 million meals thanks to $90 million in donations and 1 million hours of service from 39,000 Salvation Army officers, staff and volunteers.

If ever there was a time to get involved with The Salvation Army, that time is now, during the 9/11 National Day of Service initiative. President Barack Obama formally recognized the initiative last year to encourage Americans to voluntarily support charitable causes and perform good deeds in observance of the anniversary of the 9/11 attacks.

For more information about the 9/11 Day of Service, visit 911dayofservice.org.

From a press release by the Northern Division, serving Minnesota and North Dakota.