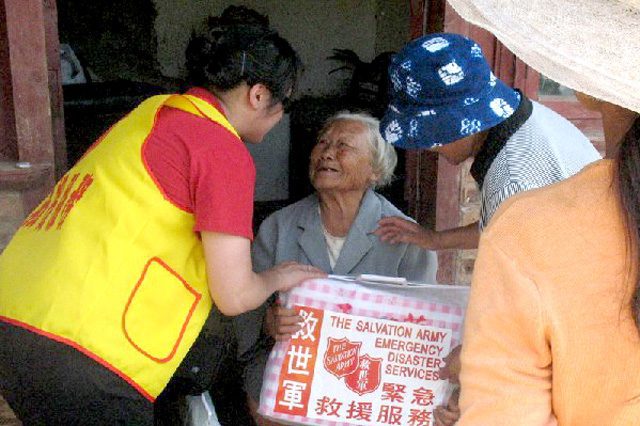 Christianity is growing in China, and The Salvation Army is set to expand its ministry within the country, thanks to official recognition and registration by the Chinese government. Chinese-American Salvationists in the USA Western Territory joined those in the South Pacific and East Asia Zone in welcoming the news, which means that the Army can conduct disaster relief and recovery, community development, social services, educational programs and—at the invitation of Provincial Christian Councils—partner with local congregations in religious activities.

With this official sanction, the Army can positively impact the lives of countless people: China is the world’s most populous country with a population of around 1.4 billion, and Christianity is growing rapidly. The Officer magazine (May–June 2017) reported: “Within three decades, China may be home to the largest Christian population in the world.”

In the West, members of the San Francisco Chinatown Corps took special note. Over the years, they have watched The Salvation Army begin to take a foothold in China, only to lose it due to a shifting political climate.

The corps sits about 6,300 miles from Gong-Yi, China, birthplace of Lt. Colonel Check Yee, Order of the Founder, and a longtime leader at the corps. As a young man, Yee emigrated from China to escape Communist persecution after they took power in 1949. He became a Salvationist in British Columbia, Canada, and eventually traveled to San Francisco to attend The Salvation Army School for Officers’ Training. Yee served at the San Francisco Chinatown Corps for 67 years, and through the years he never lost his connection to his homeland.

“I am exceedingly glad to know the good news that the Chinese government recognized and registered the Army’s services legal,” Yee wrote in a reflection following the announcement. “Salvationists and friends around the world have been praying that one day the Army’s work on China’s soil would be acceptable again.”

This achievement is the direct result of 30 years of patient, transparent and consistent relationship with government departments and Christian councils as well as partnerships with a multitude of non-governmental organizations.

“Over the years there have been many hands and hearts joined in this process,” he said. “However, we would acknowledge with gratitude the following individuals in particular: Lt. Colonel Alfred Tsang, Envoy Simon Wong, Major Tommy Chan, Major On Quang-dieu, Major Jeremy Lam and Dr. Chan Pui-si.” The Salvation Army’s ministry opened in mainland China in 1916 and quickly expanded across the northern and eastern provinces until 1949, when it withdrew from the mainland. Ministry and social services continued in Hong Kong. In 1985, at the invitation of the Yunnan Provincial Government, The Salvation Army provided disaster relief and recovery in mainland China. This opened the door to further collaborations and partnerships which resulted in a wide geographical distribution of service and a greater recognition of the organization’s presence. These programs included health education, HIV/Aids awareness, education sponsorship, income-generation projects to alleviate poverty, infrastructure and capital projects, consultation and training.

In 2015, the Central Government of China reviewed its registration expectations and procedures which resulted in the establishment of a new law in January 2017. Significant meetings in 2016 with the government and Christian councils during the visit of General André Cox and Commissioner Silvia Cox explored ways in which The Salvation Army could comply with these new regulations while expanding its partnerships and scope of work to better serve all the people of China. These discussions proved productive and opened new approaches that have now borne fruit. “God has richly blessed our efforts and desire to serve the mainland and its peoples,” Swan said. “We now have further opportunities and responsibilities to build on these foundations so the next 30 years will produce results for future generations.”

Read more about Lt. Colonel Check Yee and his story in “Telling Our Stories: Vol. 3,” available at frontierpress.org, and more about The Salvation Army in China in “Good Morning China,” by Yee, available on Amazon.