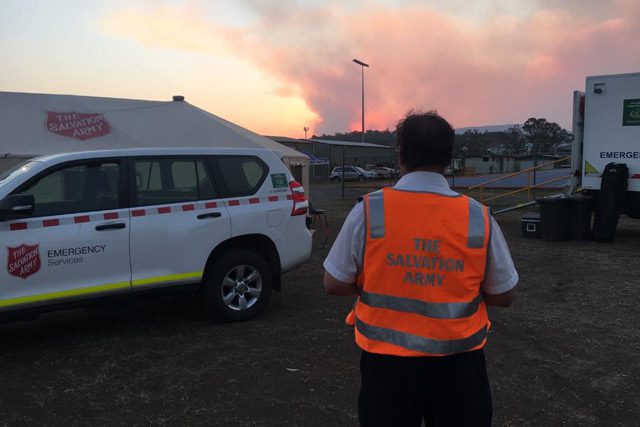 By Simone Worthing and Lauren Martin – 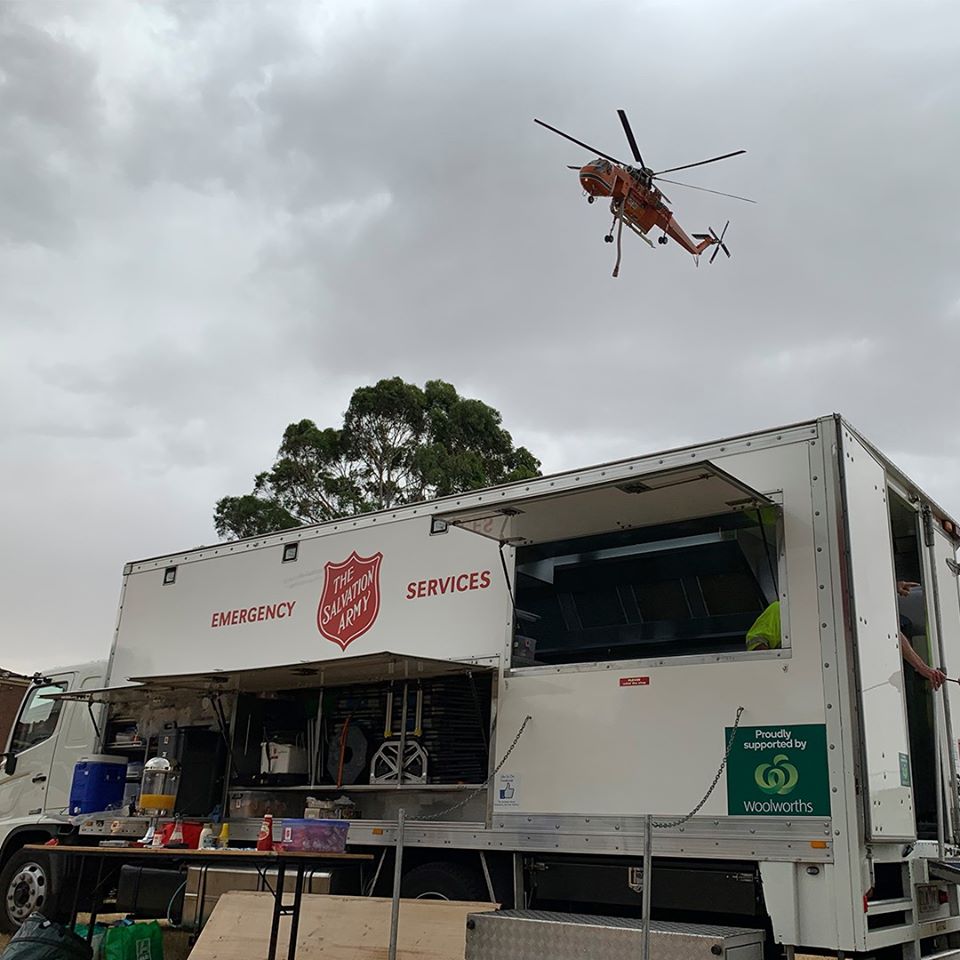 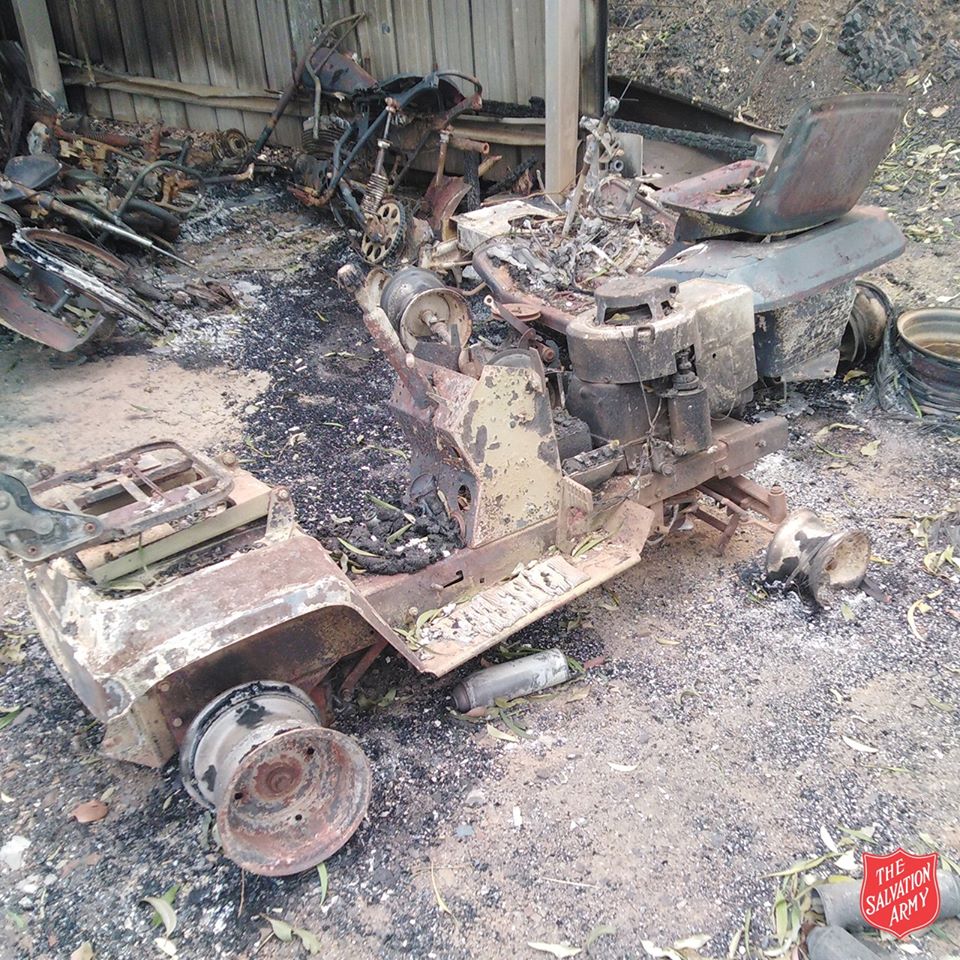 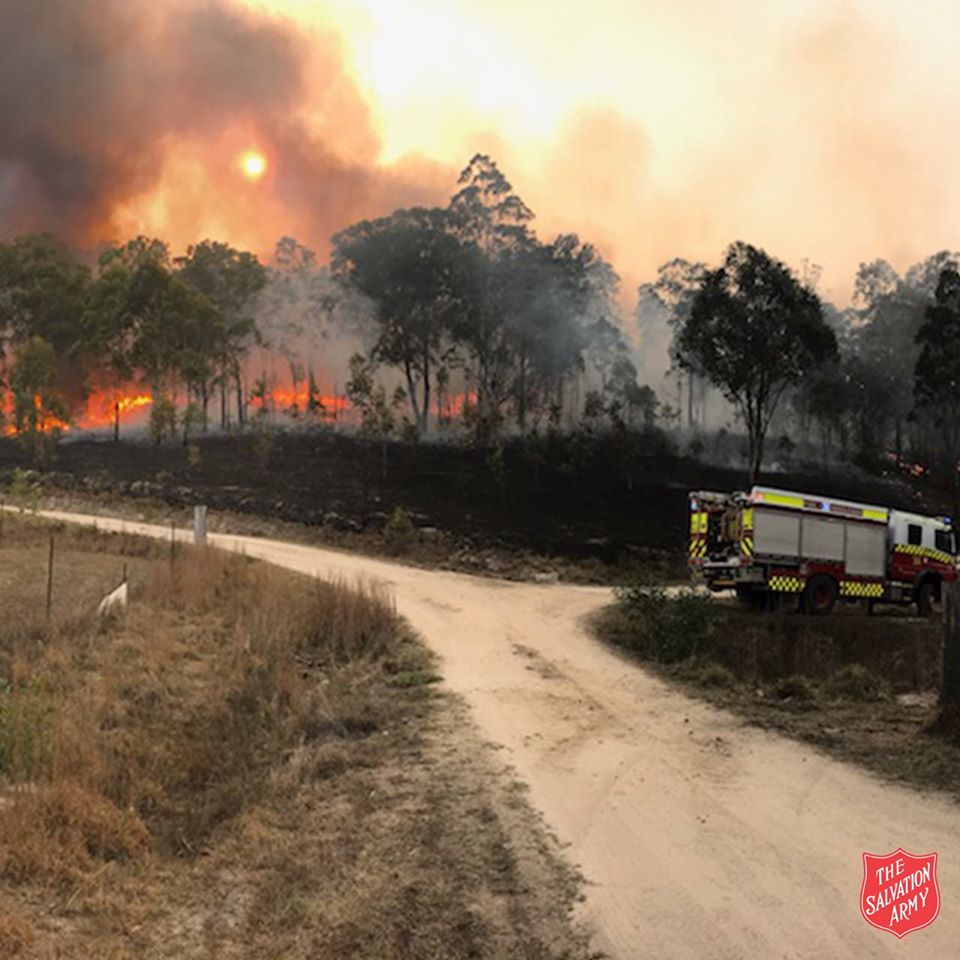 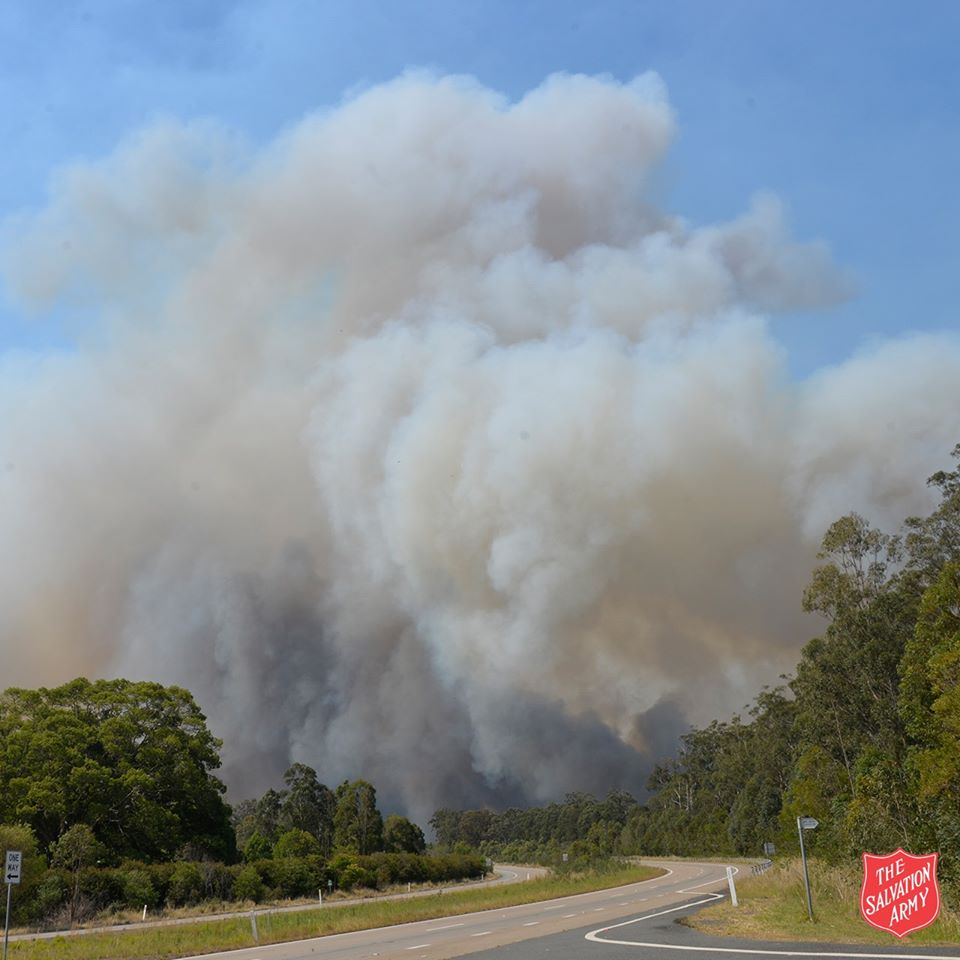 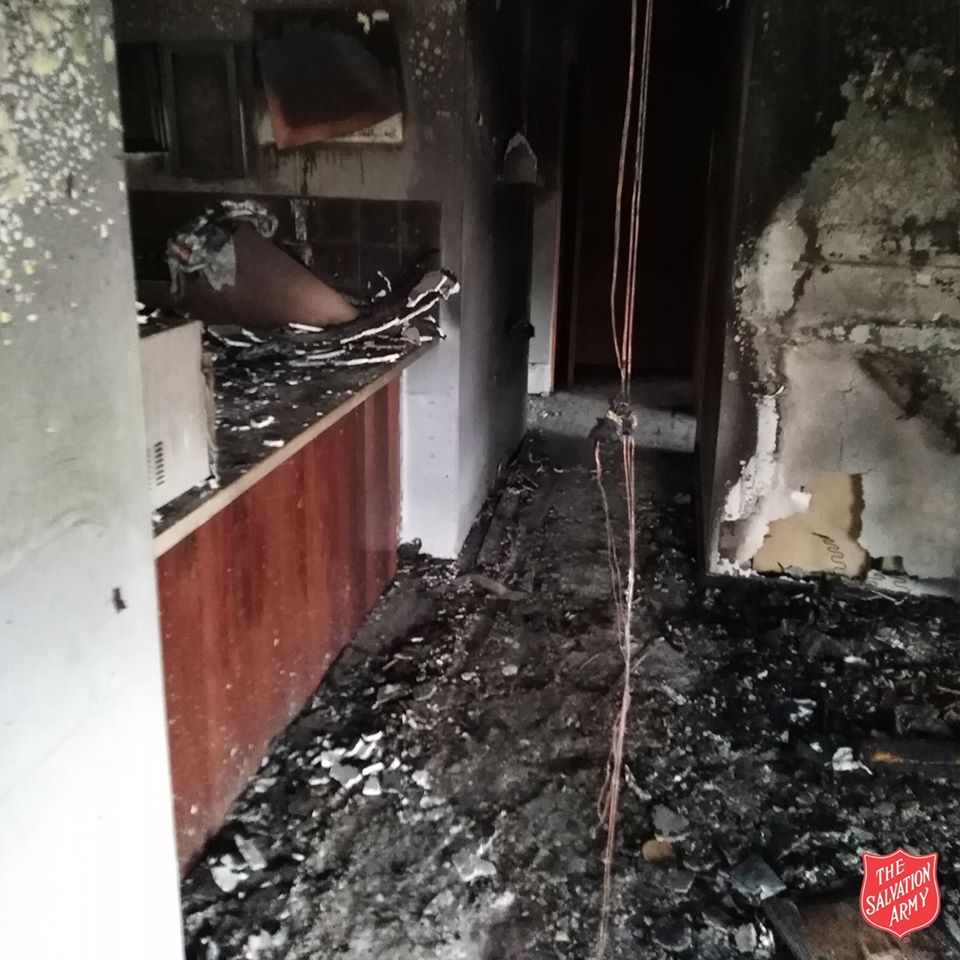 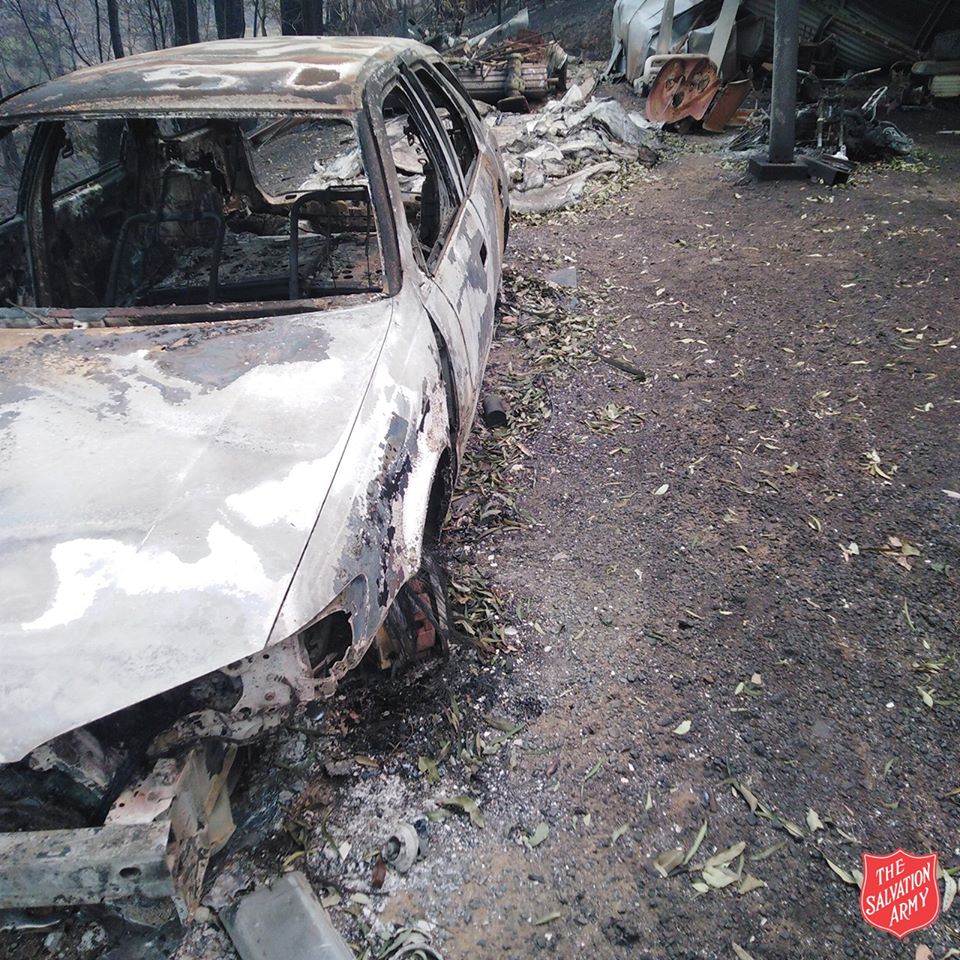 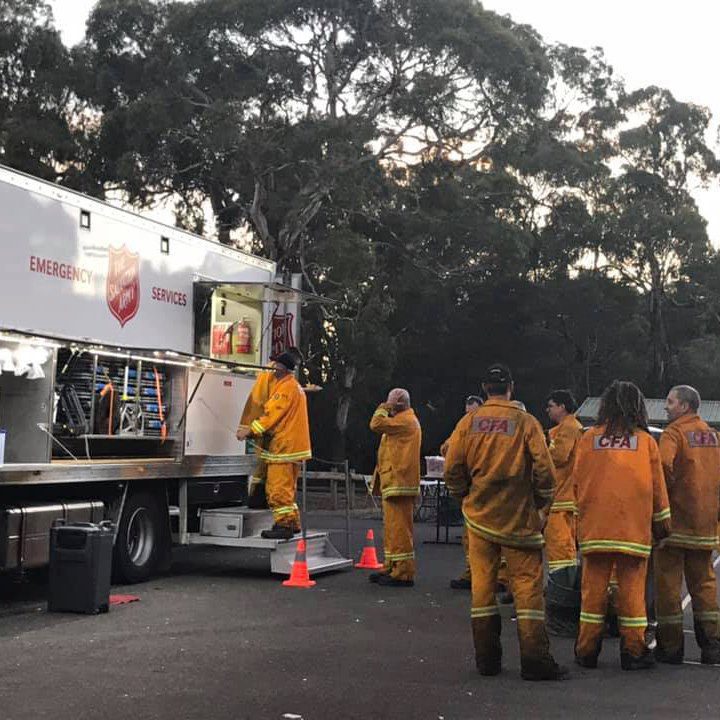 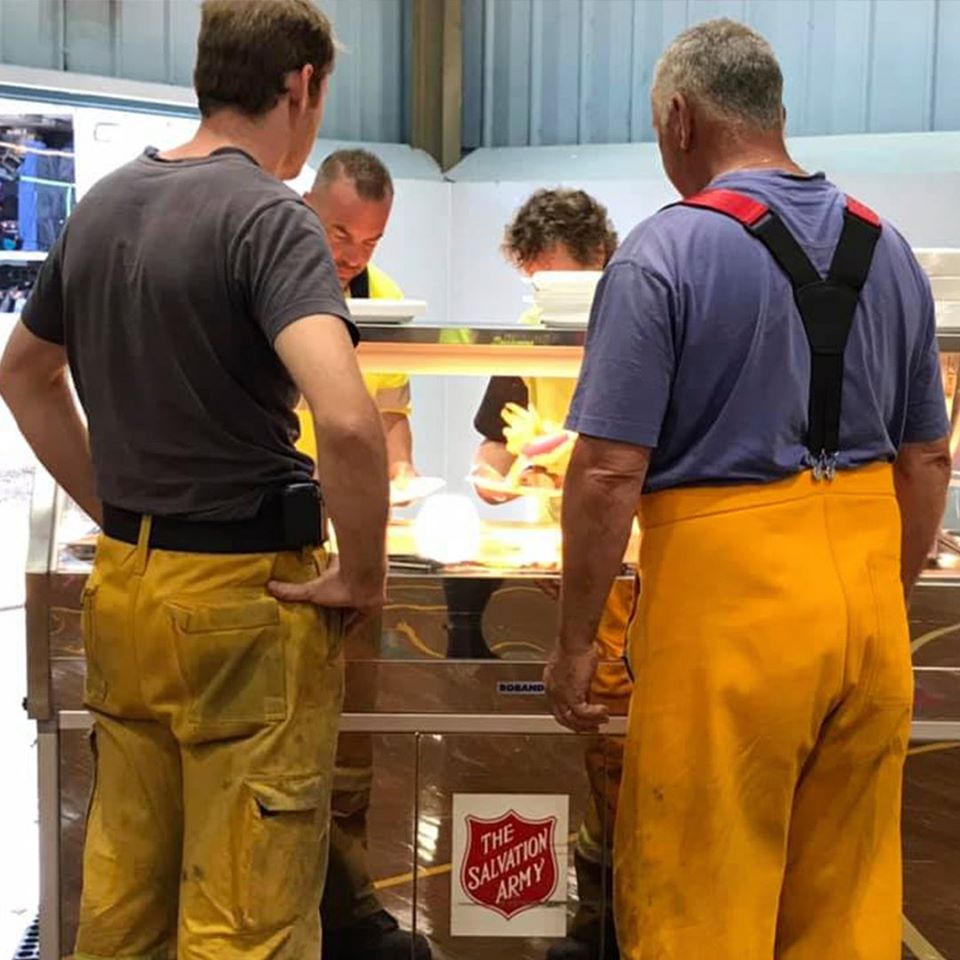 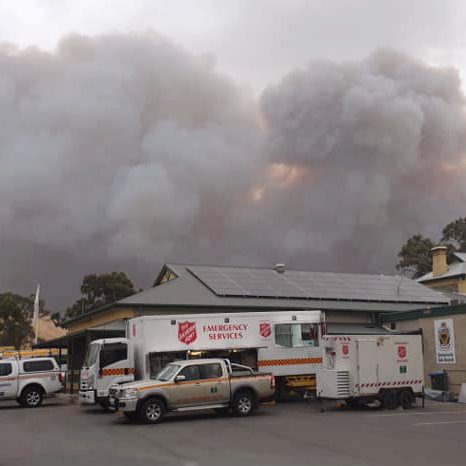 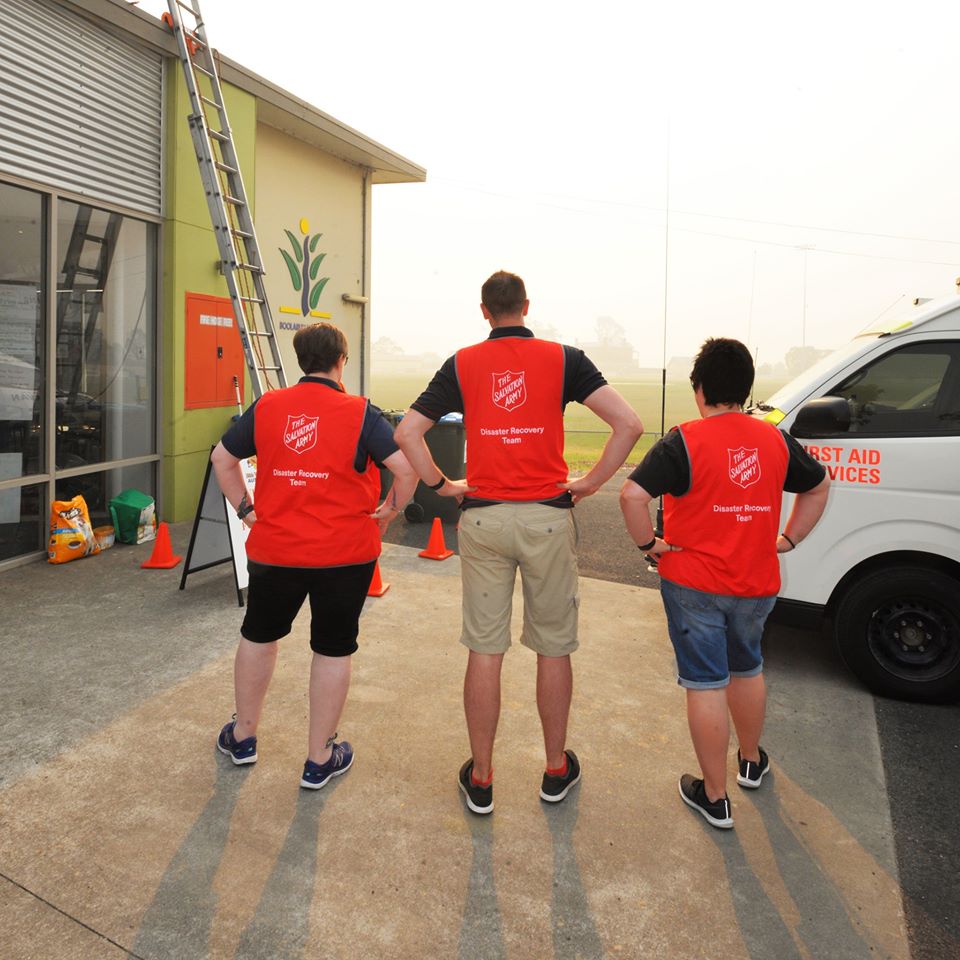 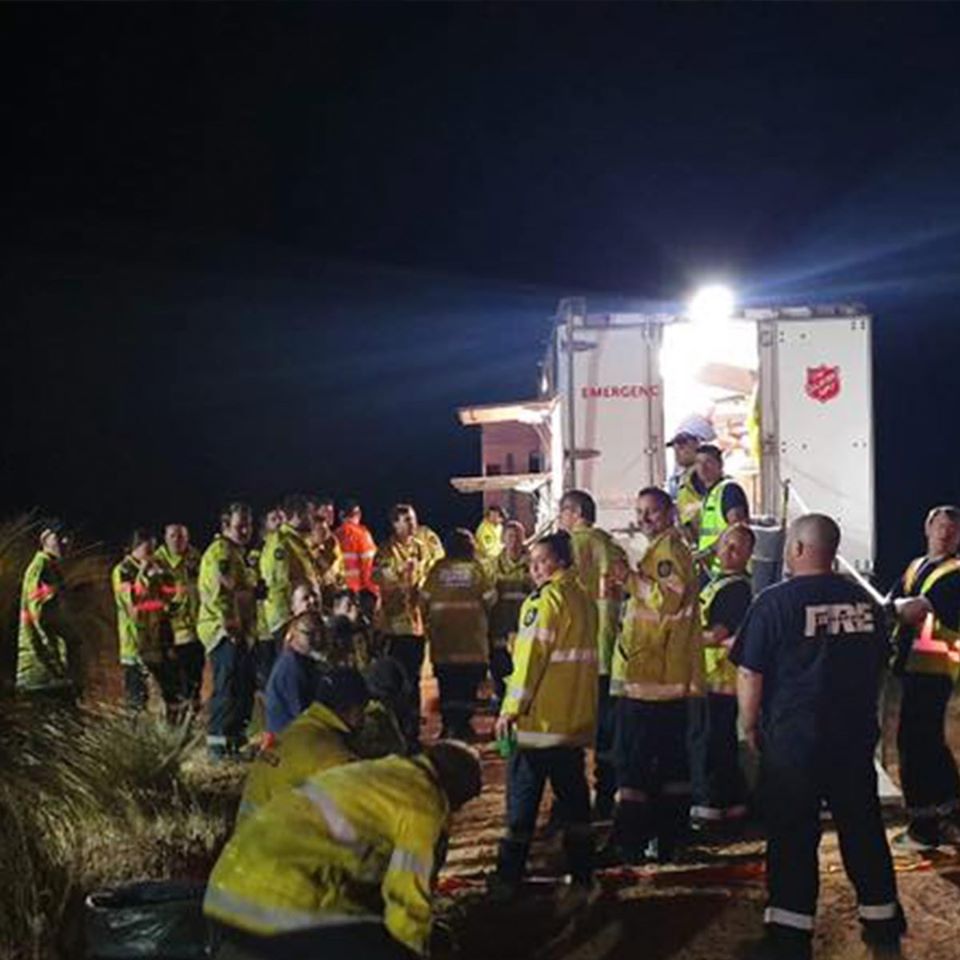 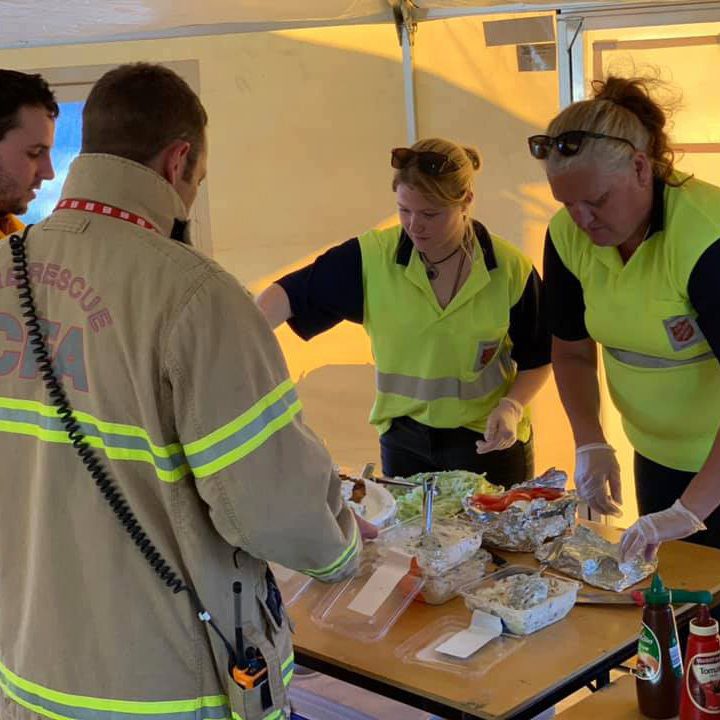 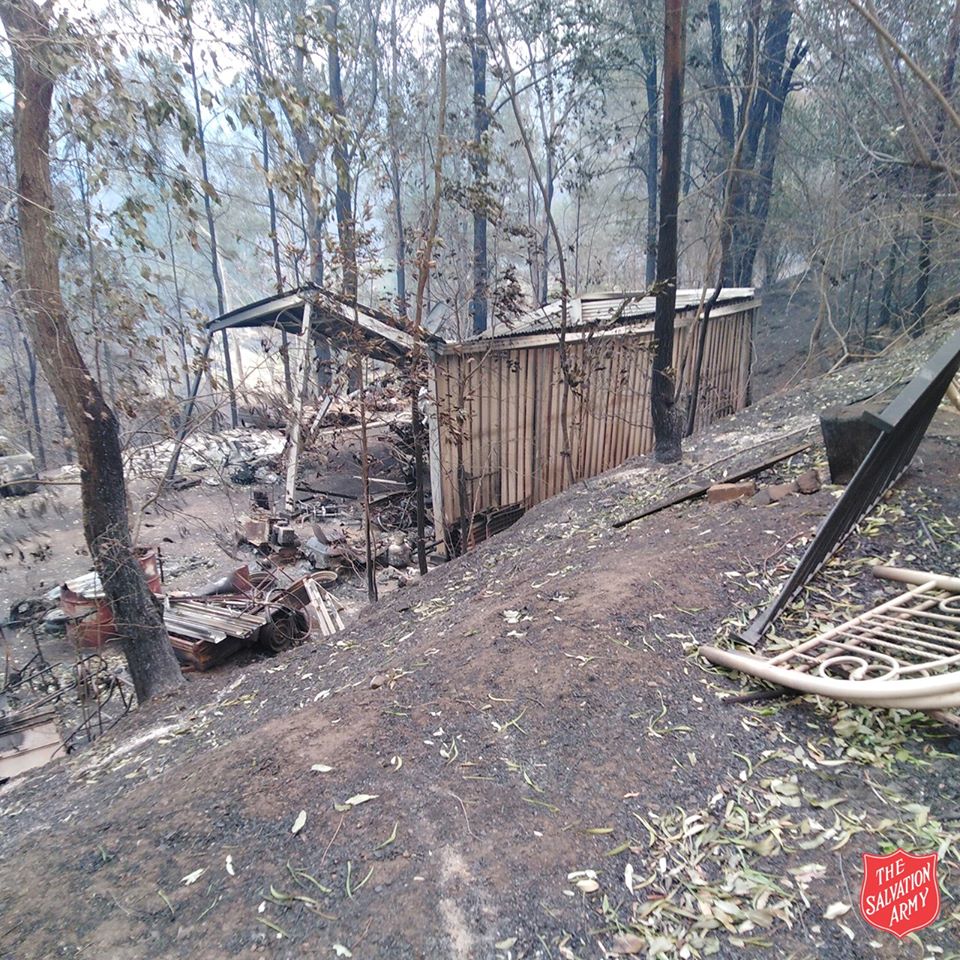 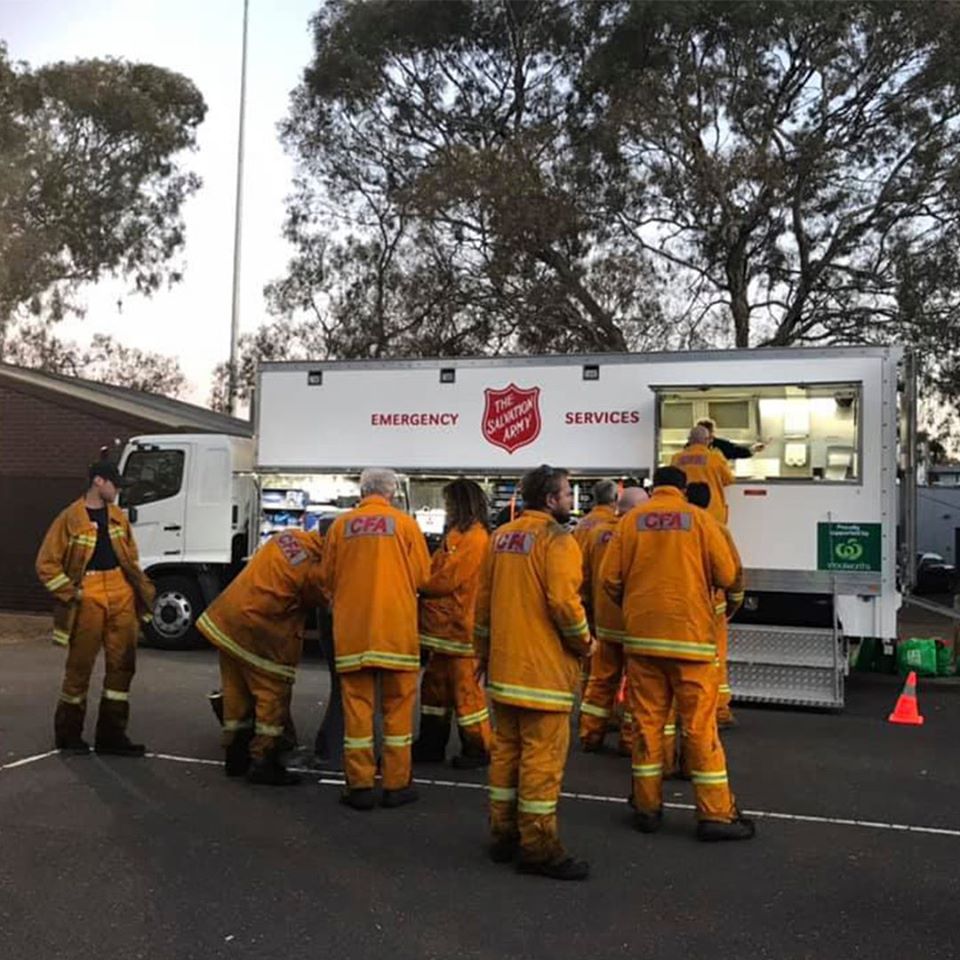 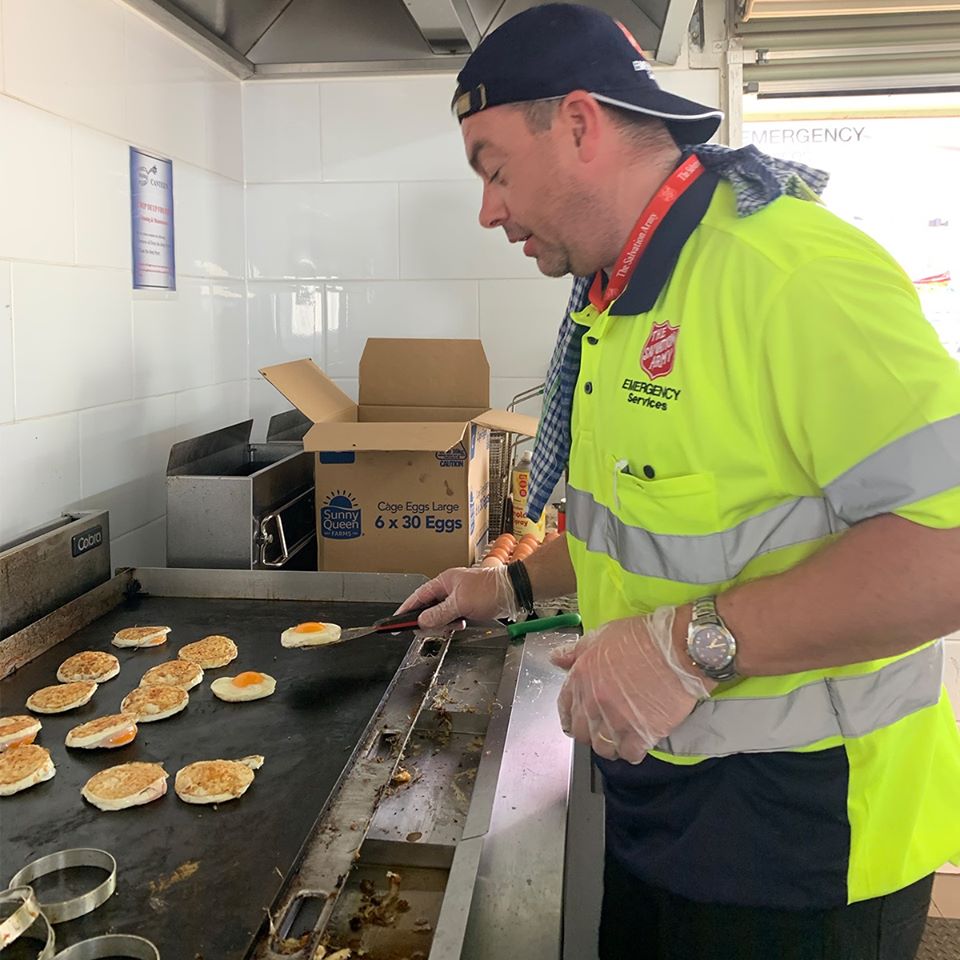 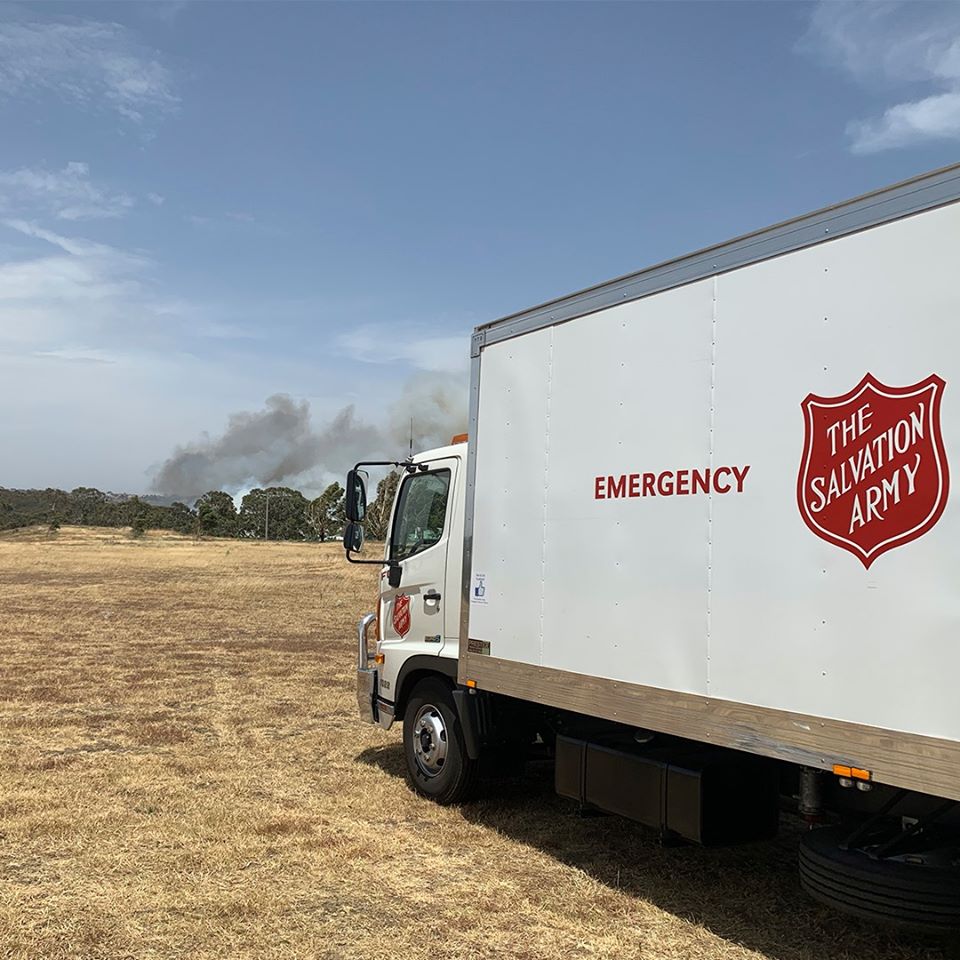 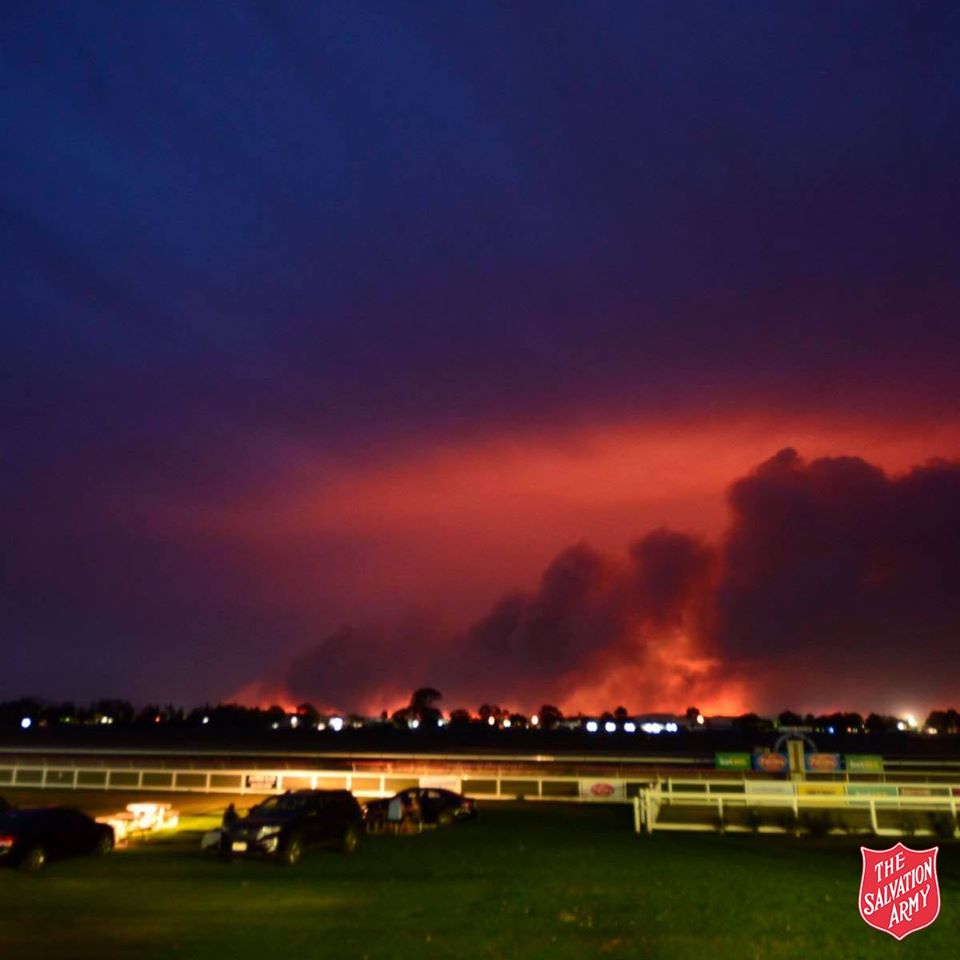 With The Salvation Army active across several states, a national response is being coordinated by the Army’s Strategic Emergency and Disaster Management team. General Manager Major Topher Holland says the emergency response now involves all expressions of The Salvation Army.

“The Emergency and Disaster Management Team is facilitating, but we are working alongside the corps and the local community who are doing amazing work,” he said. “All parts of our Army are involved, partnering with the local community.”

Rotating rosters are in place, with teams being brought in from around Australia. A team of eight Salvationists from New Zealand also arrived in Sydney over the weekend to assist.

In southern New South Wales (NSW), which has been devastated by multiple blazes, The Salvation Army is active at evacuation centers in Bega, Moruya, Batemans Bay, Ulladulla and Nowra. In the Snowy Mountains and southern inland, the Army is assisting at Wagga Wagga, Bombala and Cooma as well as Canberra in the Australian Capital Territory (ACT).

A team at an evacuation centre in Moss Vale, in the Southern Highlands of New South Wales, had to be relocated to a safer center in Mittagong at 1 a.m. on Saturday. “Such is the changing nature of this emergency,” said Norm Archer, Strategic Emergency and Disaster Management Coordinator, NSW/ACT.

The Salvation Army is continuing to feed firefighters in the Hunter Valley at the fire-staging ground at Bulga and in the Blue Mountains, west of Sydney.

Batemans Bay Corps Officer Captain Ben Knight has been overwhelmed by the generosity of the community and local businesses. “It’s just astounding how the community has come together,” he said. “We would be talking among our team and saying, ‘What are we going to do for dinner?’ and in walks a business owner, saying: ‘I’ve got 500 of this or 500 of that…do you need them?’ God’s got big ears and hears [our prayers]!”

Knight said he did some “bizarre” grocery shopping for the evacuation center in pitch blackness during a power outage: “All we had was torches, walking down the dark aisles with a trolley!” He urges people to keep praying for rain. Some has fallen but more is needed.

Further south, in Bega, Corps Officer Captain Rod Parsons said God’s presence was felt during the emergency operations at Bega Evacuation Centre. Despite the demands of feeding 3,000 displaced people on Jan. 4, the combined churches held an impromptu prayer meeting that was attended by around 100 people.

“It was really powerful,” he said. “‘We had clergy prayer in the main hall in the morning then we had a public prayer meeting in the evening, at about 5 p.m., which was at the time when the sky was at its darkest too [because of the ash and smoke from the bushfire]. We just got together and prayed over the valley. We had a few musicians come and play songs…’Amazing Grace’ and we finished with ‘How Great Thou Art.’”

“When the Cooma and Bombala Evacuation Centres opened on New Year’s Eve, all the supermarkets started donating…especially much-needed water,” Sandra Barford said. “Then local businesses and food services quickly offered pre-cooked food. At the same time, the local community signed up to cater and operate the kitchens.

“We have been blessed by the heart-melting generosity of the hands and feet of locals,” she said.

Salvation Army emergency response volunteers are serving at evacuation centers around the state, including the main operations in Bairnsdale, Wangaratta, Tallangatta and Sale, in the Gippsland region.

Community recovery teams are on the ground in Bairnsdale, where additional SAES volunteers are arriving to give the local team a break. Teams in Western Australia and Queensland are on standby in case further assistance is required.

In Sale, people are being airlifted in by military helicopter to a center with capacity for 300 people—with 300 beds supplied by Salvos Stores, The Salvation Army’s thrift store chain.

Trained recovery volunteers have been deployed around the state, with the Department of Health and Human Services referring people who have lost their homes to The Salvation Army.

“Woolworths [a retail chain] has played a critical role in supplying water to evacuees from Mallacoota who we also assisted,” said Captain Rob Champion, Strategic Emergency and Disaster Management Specialist. “They organized a transport company to get the water onto police boats as people were evacuated, and then also supplied additional water that we met the evacuees with, along with other essentials.”

Salvation Army Emergency Services volunteers have been serving firefighters and other emergency services personnel at the Cudlee Creek and Kersbrook fires, and are now catering for teams on Kangaroo Island.

Recovery efforts are also underway for people who have lost homes in Cudlee Creek.

“We are now able to focus, for the first time in quite a while, on just one location,” said Acting SAES Coordinator Alan Stevens. “The Kangaroo Island fire is still out of control, though, and the entire national park here has been burned.”

The SAES team, which was located in the middle of the island, is now relocating to Kingscote, the biggest town, which will bring them nearer to the airport—with better access to relief supplies and enable them to serve the 700 firefighters battling blazes on the island.

“This will give us more access to more ‘firies’ [firefighters], many of whom are often fighting fires in very difficult terrain,” Stevens said. “We also send out takeaway packs. We’re a moving feast!”

In Queensland, Western Australia and Tasmania, Salvation Army Emergency Services volunteers and corps members in previously fire-affected areas are enjoying a welcome reprieve. However, teams are on standby and able to assist should they be required for interstate operations.

Even as the fires continue to rage around the nation, Major Sue Hopper, Strategic Emergency and Disaster Management Specialist, Queensland Division, is in Sydney to assist with recovery efforts.

“We are providing Salvation Army grants from our public appeal to people who have lost their homes, as well as offering a listening ear, support and hope,” she said. “What we’re doing is immediate help and giving people a bit of hope—something to move forward with one step at a time.”

Report adapted from an article by Simone Worthing and Lauren Martin for others.org.au