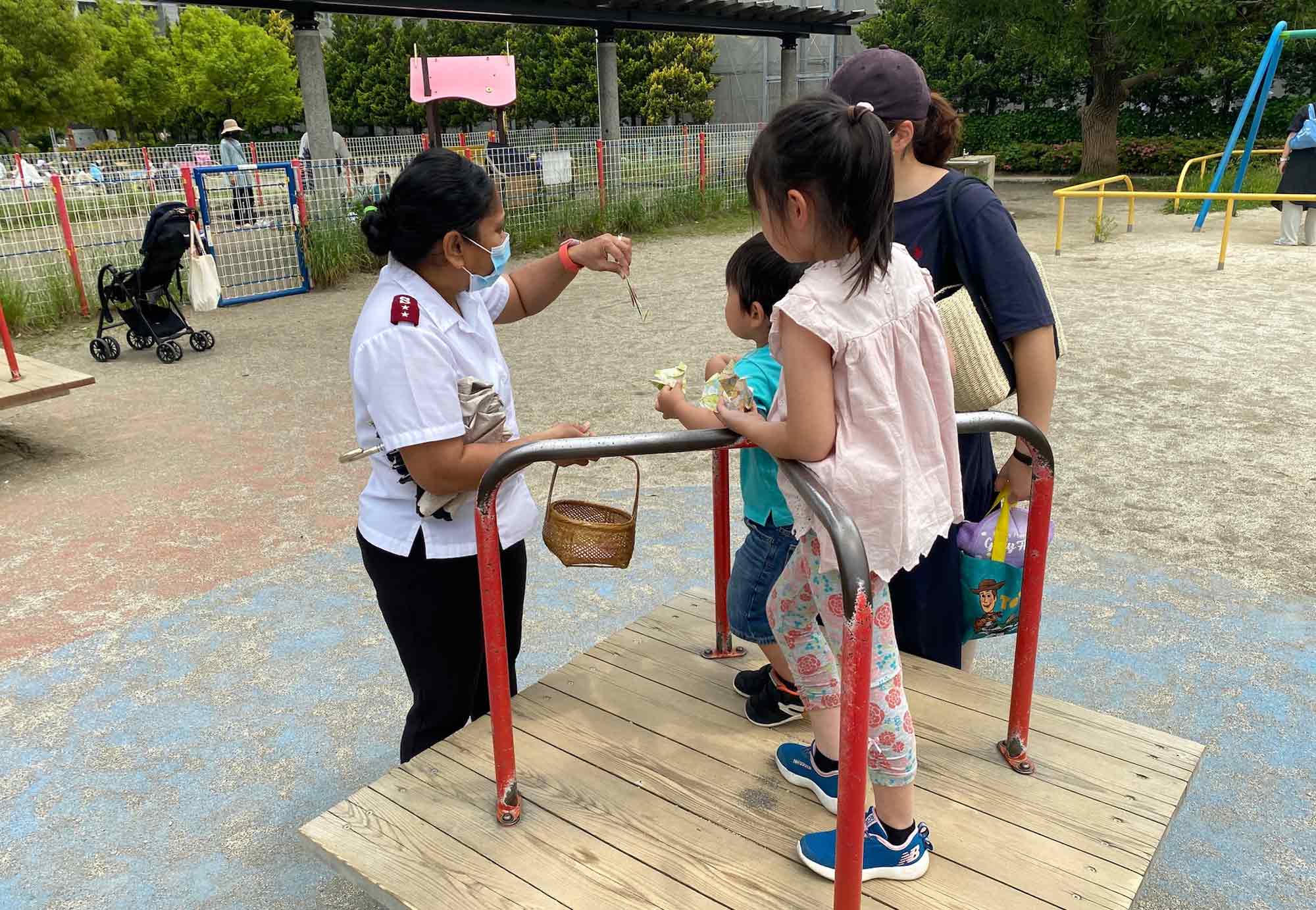 Origami opens conversation for The Salvation Army in Tokyo

A new ministry in the park is introducing the community to The Salvation Army.

The Salvation Army has a long history of reaching people in creative ways, which Captains Phillip and Sejal McCutcheon leaned into when they moved to Tokyo as Koto Corps Officers.

As they walked their daughters through the park to school, Sejal McCutcheon said she noticed many mothers playing with their children and the idea for a new ministry was born: origami in the park.

“I had the idea of starting a ministry to introduce ourselves and the church to the parents and kids,” she said. “Japanese people are very shy at first and often would not come up to talk. With that in mind, children and adults alike enjoy origami here and I thought that this would be the opportunity that I needed to break the ice.”

Now, every Thursday, McCutcheon and members of the corps visit the local park for evangelism.

The McCutcheons left home in the western U.S. for Japan in November 2020, embracing an overseas appointment during an uncertain time. Prior to this move, they had been serving in the West’s Southwest Division.

“We arrived during the pandemic and had a total of six states of emergency until March 2022,” Sejal McCutcheon said. “It was a tough road for us but we didn’t give up. We continued with our corps programs and our Sunday service.” 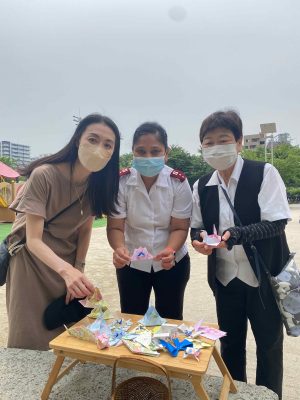 As a worldwide movement, The Salvation Army is officially active in 132 countries. Its officers have the opportunity to serve outside their home territory—the one in which they received their officer training—to support and grow The Salvation Army’s mission: To preach the gospel of Jesus Christ and to meet human needs in his name without discrimination. While the mission is unchanging, the immediate needs and means of meeting them may vary depending on where an officer serves.

“While the U.S. is known as a Christian country, Japan is a Buddhist or agnostic country,” McCutcheon said. “You can imagine the difference between the Western Territory and Japan. We do not have a massive social service operation like the Western Territory, but slowly, since 2020, divisional headquarters has started a food bank under the Koto Corps.”

Realizing the Japanese community was somewhat skeptical of foreigners, McCutcheon prayed for a way to reach people. Knowing creative arts have the power to make the gospel accessible, and hoping families in the park would respond to origami, a traditional Japanese art form, she enlisted help from the Koto Corps’ women’s ministry group and others who enjoyed making origami.

“Origami ministry is an opening gate for our church to go and share the gospel,” McCutcheon said. “Every week our women’s ministry ladies make a variety of origami for children.” Inscribed on the origami is the message: “Jesus loves you” in Japanese. 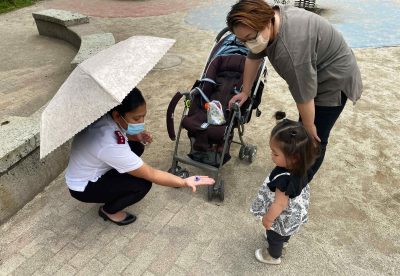 Volunteers have enjoyed creating the origami.

“I quickly began to get flooded with large, small, ornate and simple origamis in such colorful paper that we would be able to pass out at the park,” McCutcheon said, adding that some women contributed origami while others volunteered to go to the park for the once-a-week excursion to “bring a bit of joy and happiness into someone’s life…Going out to the park and talking to strangers is not something that comes easy for many of them at first, but they have enjoyed it and it has been a great opportunity to share the gospel.”

One participant, Nanae Endo, said she had doubts about the plan.

“However, I notice that some mothers really want to talk to others like us,” she said. “Children are so honest and cute. Every time I feel happy after serving them. I hope they will have opportunities to come to church someday in the near future.”

While the focus is outreach to families with children, the impact goes further, touching people of all ages. One day, as the origami team headed back to the corps with a few leftover pieces, they noticed an older woman watching them.

“She gave us a slight smile,” McCutcheon said. “So, I approached her and politely asked her to pick any origami she liked.”

After the woman chose one, she told McCutcheon, “Receiving the origami made my day.”

“That’s one reason why I enjoy doing this ministry—such a simple thing can bring such happiness to someone who may be brokenhearted,” McCutcheon said. “We use that opportunity to share the love of God and remind them there is hope in Christ.”

The origami ministry is helping the corps build relationships within the community. Team members invite people to the corps for the worship service and for Sunday school, offered in both English and Japanese.

“As a corps officer, I am delighted to see this origami ministry work in the center of our community,” Phillip McCutcheon said. “We are spreading the word and people are getting to know us as a Salvation Army.”

Sejal McCutcheon said, “Beautiful things have happened, and I rejoice in my heart,” noting 1 Corinthians 3:6: I planted the seed, Apollos watered it, but God has been making it grow. “All I can say is Jesus is on fire in Japan.”