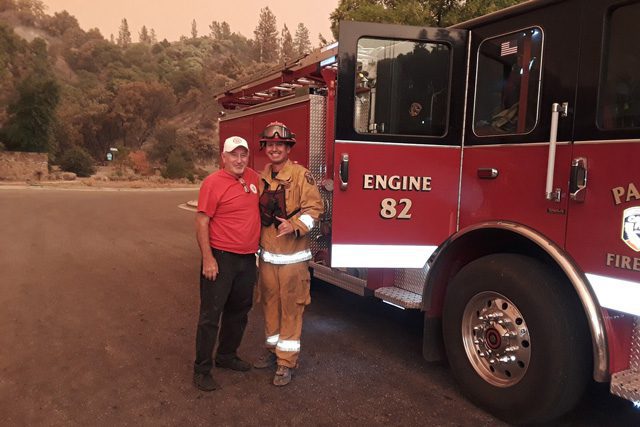 As the deadly Carr Fire continues to burn more than 100,000 acres in Northern California, The Salvation Army has increased its presence, deploying five Emergency Disaster Service teams to serve evacuees, up from its previous two-team operation.

“It’s so wonderful to see people stepping up and loving each other by serving each other,” Captain Timothy Danielson, the corps officer in Redding, said in a television interview with Action News Now. “We couldn’t do what we do if it wasn’t for the greatness and the kind heart of the people in the community.”

The Salvation Army’s five mobile canteens serve in locations in and around Redding. In addition to providing emotional and spiritual care, Salvation Army teams have served more than 6,000 meals, 6,573 snacks and 4,880 drinks to evacuees, as of July 31.

Celebrity chef Guy Fieri joined the Salvation Army in Redding to serve lunch and dinner to evacuees Sunday. Along with Operation BBQ Relief, the number of meals prepared came to nearly 1,400.

“You take a moment like this, and you see what America is made of,” Fieri, who helped alongside the Army during last year’s Santa Rosa fires, said in an interview with CNN.

The Carr Fire broke out July 23 after a mechanical issue involving a vehicle, according to officials. The fire has since burned 110,154 acres and is 27 percent contained, as of July 31, according to Cal Fire.

The Carr Fire is blamed for six fatalities. It has destroyed 884 residences, four commercial structures and 348 outbuildings, according to Cal Fire. More than 200 buildings, including residences, were also damaged by the fire.

California Governor Jerry Brown declared a state of emergency for Shasta County on Thursday due to the Carr Fire.

North Valley FoodMaxx stores will collect donations for The Salvation Army’s relief efforts in the Redding area until August 3, and match donations up to $2,500.

If you would like to donate to efforts helping those affected by the Carr fires, visit www.gosalarmy.org.