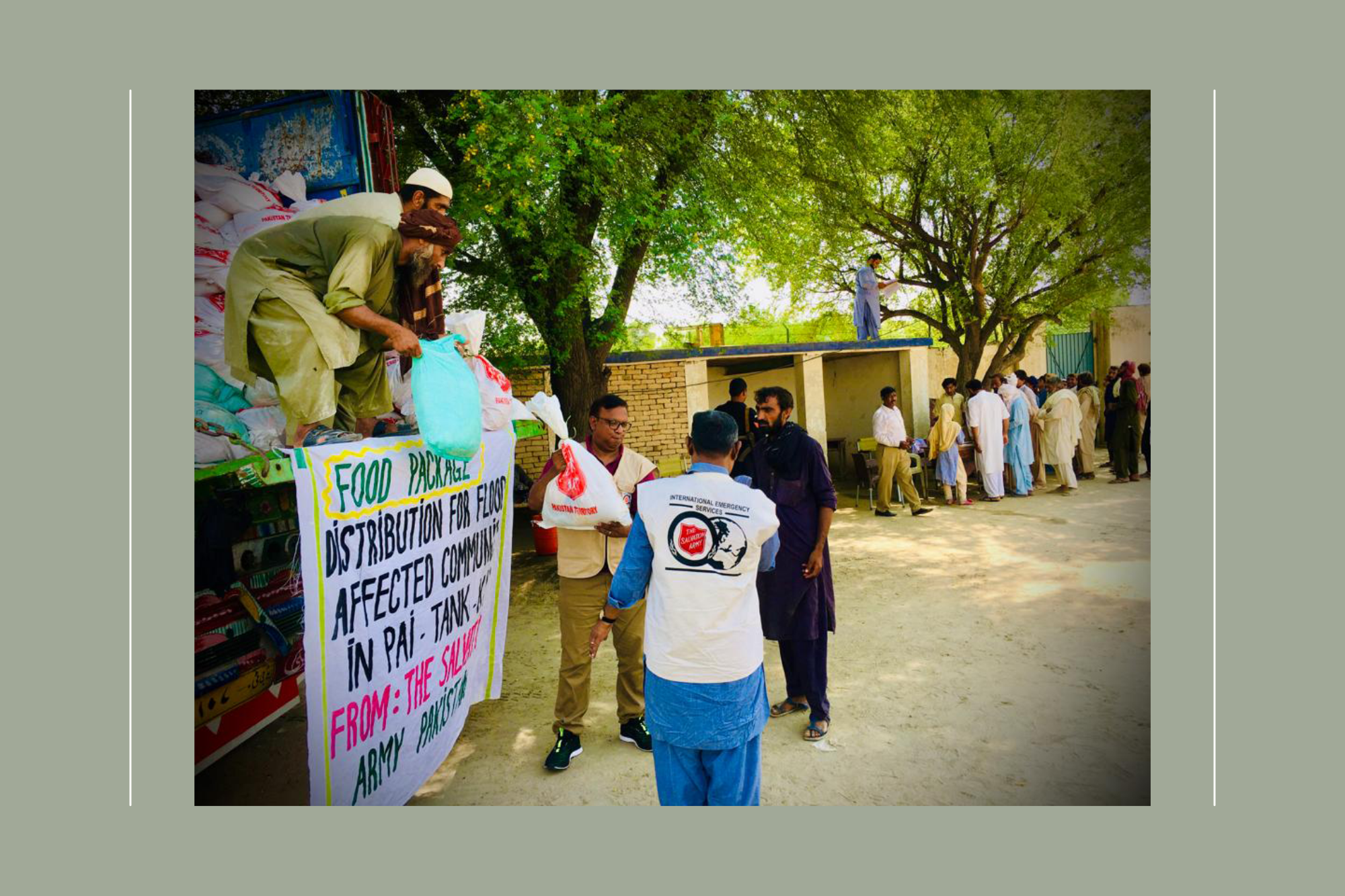 Pakistan is facing its worst flooding for 60 years, as heavy rainfall continues in some regions. An estimated 33 million people have been affected by the intense flooding and 80 of 160 districts have been declared as “calamity hit,” according to the National Disaster Management Authority (NDMA).

“In response to the devastation, the government of Pakistan has released funds, including immediate cash relief,” said UN Secretary-General António Guterres in a video message after several months of rainfall. “But the scale of needs is rising like the flood waters.”

The Salvation Army is operating to provide relief without discrimination. Affected families, with an average size of six people, are being supported with cooked food, hygiene articles and shelter arrangements. The Salvation Army is working in close coordination with government agencies to ensure maximum effectiveness.

“We were not expecting this. For some, everything is gone,” said George William, Partnerships and Program Development Consultant for The Salvation Army in Pakistan. “It seems to be bigger than we know. In some places, people are unable to be reached. There are also those who have been contacted and supported by relief workers just in time.

Salvation Army workers met with a community leader. He had been concerned about how people would survive as he had not expected additional help to access the village. He wept tears of relief when The Salvation Army arrived to assist him and gave him the opportunity to be part of the distribution efforts and serve his community.

In the Balochistan province, covering the southwestern region of the country, 500 families stuck in flood affected communities have been supported through the distribution of food packages and hygiene kits. Two of the target areas, Pishin and Umeedabad, have been so impacted by the floods that many people were at high risk and unable to receive any support before The Salvation Army made successful relief contact.

The Khyber Pakhtunkhwa province (KPK), in the northwest, is dealing with significant loss of life due to the flooding. Approximately 600 families have received relief from Salvation Army personnel in KPK. Support in the Sindh province, the southeastern region of Pakistan, has been focused on the Karachi slums and Dadu areas where response activity, including the provision of food and sanitation items, should reach a target of 550 families.

‘For some, everything is gone’

A major obstacle for first responders is access in order to be able to deliver much-needed aid. Since the heavy rains started, over 6,000 km and 243 bridges have been damaged or destroyed. It is difficult to reach the regions facing the most extensive damage from The Salvation Army’s territorial headquarters, situated on the eastern border in Lahore.

An increase in the demand for and a decrease in the supply of produce and supplies is leading to challenges acquiring much-needed relief items. Food insecurity is looming following the loss of 750,000 livestock and additional spoiled agricultural produce. There is a shortage of food and shelter, as well as damage to health infrastructure.

Previous emergency situations have afforded The Salvation Army the opportunity to implement Disaster Risk Reduction (DRR). Following the Pakistan flooding of 2010, The Salvation Army sought to reduce the risk of future disasters through the provision of swimming lessons, documentation protection and the construction of stilt houses.

As recipients of the 2010 DRR investment faced the flooding of recent months, there have been reports of successful application of tools to mitigate the impact of disasters. “People have been placing mud alongside rivers to prevent further flooding in a nearby village, just as they were trained,” said William. “We can see the result of these activities in action.” It is hoped that, once the initial response is complete and recovery is underway, further DRR activity will be possible in some of the flood affected areas.

Salvation Army emergency response teams and volunteers will continue their rapid response in flood-affected areas, carrying out further needs assessments on the ground as they work. The worldwide Salvation Army is praying for the people of Pakistan, and those who are working to provide relief, amid the destruction and devastation they face in these days. May God sustain them and be their strength.