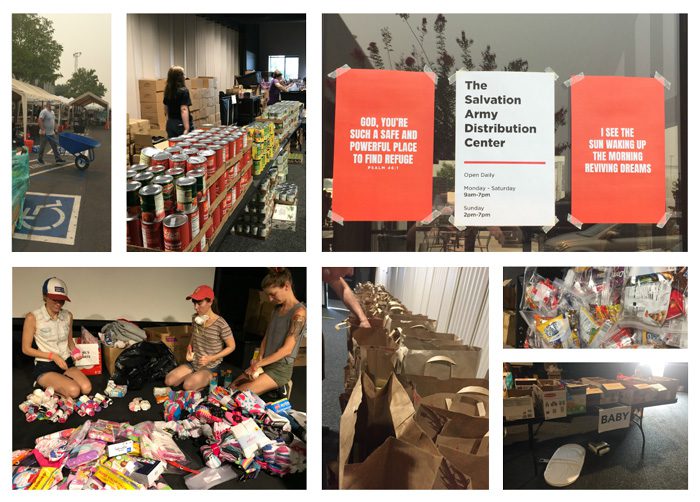 The Salvation Army and Bethel Church have teamed up to provide a distribution center for evacuees of the Carr Fire.

With well over 1,000 homes damaged or destroyed in the fire, many Shasta County residents have evacuated with little more than the clothes on their backs.

That’s where the distribution center steps in. The operation at Bethel is offering meals, supplies, a cooling center and emotional support. According to Captain Timothy Danielson, Redding Corps Officer, when the Carr Fire broke out, in-kind donations began pouring in at the evacuation shelter at Shasta College. “Nobody was ready for it,” he said.

So The Salvation Army took over donation management, with the blessing of the Red Cross and Shasta County. There was just one problem: there was nowhere for the donations to go.

Bethel Church offered to provide a landing spot for donated materials. Dating back to the 1950s, Bethel is a large North State church with a network of campuses and thousands of congregants. The distribution center operating at the main campus on College View Road.

“It was a miracle, because they made it happen, and they’ve done well,” Danielson said.

Everything from household essentials, canned food and water, protective face masks, socks and other clothing are available for survivors. Church staff are working with The Salvation Army to coordinate incoming donations. Trucks with new deliveries enter the church grounds multiple times per day.

Individuals and families who come in for assistance are referred to as “guests,” and members of Bethel staff go out of their way to make their guests feel welcome. Each party takes a shopping cart, and goes through a series of rooms where they can stock their carts with needed items. Then, there is an optional room where trained counselors offer to help them through their stress and grief.

As of their second week in operation, the distribution center had 3,865 volunteers who had served 14,372 hours. The operation had served 5,211 guests.

“I’m just really proud of Bethel, our community partners, they really stepped up,” Danielson said. “Because of that our community has reaped the rewards. They had the vision to make sure we are doing what we need to be doing.”

Mark Mack, now retired, was a firefighter with Cal Fire for 32 years, and has been a member of Bethel for 30 years. He has stepped in to help run the operation.

“It’s amazing how well the leadership here has created a system of organization, based on the Incident Command System. You’ve got to have structure,” Mack said.

But all of the structure that has been put in place is for a higher purpose.

“We are here to listen,” he said. “The evacuees want to tell their story. They need to process what they’ve been through. If we can take the time to stop and listen, that’s what matters. When it’s time to grieve, we’ll grieve. In the meantime, we’ve got a job we’ve been called to do.”

The distribution center remains open for the time being, however, in-kind donations are no longer being accepted. Monetary donations may be made here. Learn more about The Salvation Army’s response to the Carr Fire here, or by following us on Facebook.