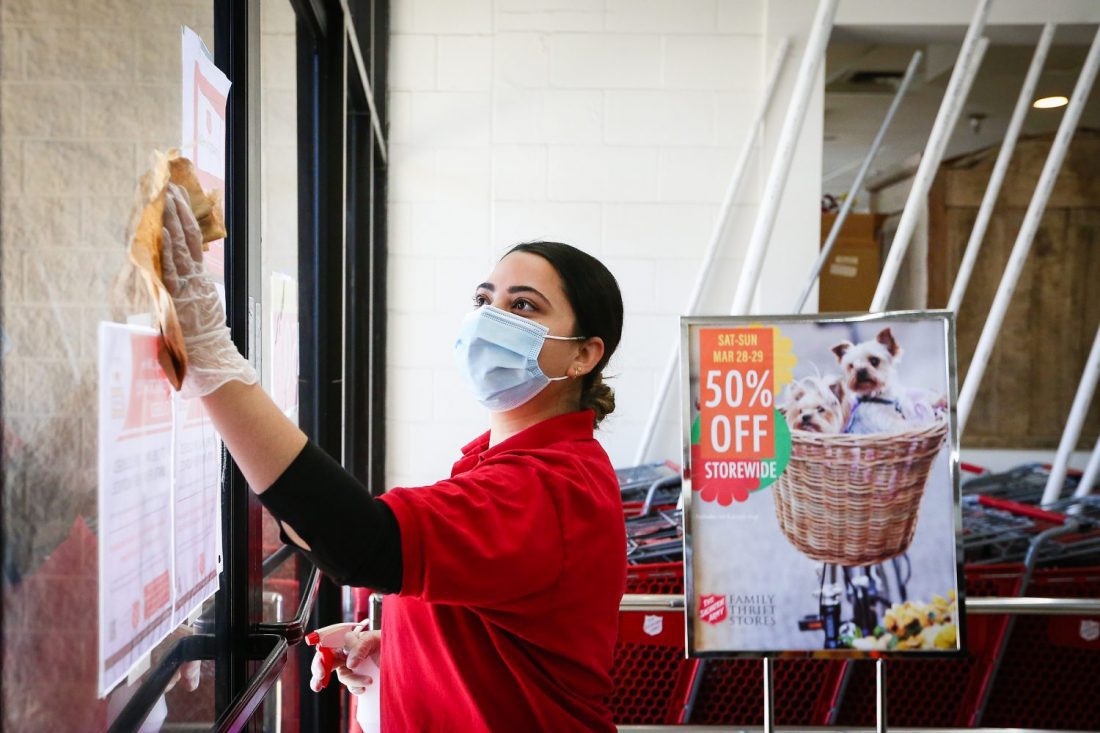 Shoppers may have had to wear masks and keep a distance, but that did not stop them from lining up around The Salvation Army Pasadena Family and Antiques stores for the reopening May 22. They were eager to find their next gem and regain some sense of normal during COVID-19.

Many of those first in line were regulars at the store, Manager Manuel Hernandez said, likening the situation to the television series “Cheers”—“everybody knows your name,” he said.

“I see there’s people lined up,” he said. “We’re going to get back to business.”

For shopper Reiko Kim, the reopening is a homecoming of sorts. Kim said prior to COVID-19, she dropped by the thrift store every day. She’s happy to be back.

“It’s been so long—too long. I come here every time I go shopping,” Kim said. “I collect Pyrex, Fire-King—all those old dishes—so it’s nice to be back…Everything’s well stocked and I’ve heard a lot of people are donating, so there’s more to come.”

The Pasadena store was reopened May 22 along with other locations in Southern California, Hawaii and Colorado, as part of the Adult Rehabilitation Center’s (ARCC) phased reopening plan for its thrift stores that features enhanced safety measures.

The reopening is an important step toward financial security for the no-fee, residential ARCs that are funded by the sale of donated items in The Salvation Army’s Family Stores. The drug and alcohol rehabilitation centers have been without necessary funding for more than eight weeks.

“What supports our Rehabilitation Center—our residential program—is our thrift store income,” ARC Commander Major Henry Graciani said. “Without thrift store income, we have no way to support our men and women in the program, so it’s vital we get the stores open to generate the support to keep our program alive and well.”

But it’s not as simple as just reopening the thrift store doors and adding personal protective equipment. The ARCC has strategically planned how it will reopen stores, taking several factors into account, including local government guidelines, foot traffic in other opened thrift stores and the income generated by Family Store location.

“We’re measuring and looking at as many different metrics as we could to be able to say it makes sense to open and we think it will generate revenue to support our program,” Graciani said. “What we don’t want to do is open the store and not have any foot traffic, and then actually have a loss to the program. We just can’t afford that…We’ve been very strategic in this in our approach, and so the good news is here in Pasadena, and actually…the other 14 stores, is there are lines developing outside the store, so that’s a good sign. I think we’ll see some good foot traffic and some good sales today.”

The command’s soft goal is to have all of the West’s thrift stores open by the end of June, but Graciani anticipates it might take longer.

“I think the reality is that as we see the response of the communities, and the response of our employees—their comfort level coming back to work—and the sales flow, we’ll see it stretch out perhaps into July,” he said. “But we’ll see how it goes.”

In Pasadena, Assistant Store Manager Kim Jones serves in a new role standardized across the command: COVID-19 Ambassador. At the door, she greets shoppers and talks about safety protocols, while tracking the number of people in the store on her phone.

“When it comes to the customers, we’re making sure they’re wearing a face mask—the employees, too—we’re making sure they have a face mask, gloves,” Jones said. “We are going to be properly sanitizing the baskets and the carts and even, too, when it comes to the customers signing their signature after each transaction, we are going to be sanitizing those pens, so after one use, we’re cleaning them.”

Inside the store, COVID-19 stations with hand sanitizer, paper towels and cleaning products are staggered throughout the building as one of the myriad ways The Salvation Army is trying to keep its shoppers and thrift store staff safe. Fitting rooms are closed. Tables separate customers from the register station. Customers have been asked to pay by tapping their credit card or using Apple or Google Pay. It’s about staying safe while keeping the mission.

“Every donation, every purchase saves a life,” said Region 1 Regional Manager Kim McIntyre. “And our customers have been wanting to come in…just to pick up some items to feel normal again…Even though it’s not normal, it won’t go back to normal for a while—just to feel normal again…The stores are clean. We have met COVID standards. We are trying our best to service our customers—just to make them feel welcome. We’re back. You can come back home.”

The Salvation Army first reopened three Family Thrift Stores in Phoenix, Arizona, May 15, after the state relaxed some of its restrictions. The first weekend grossed nearly $20,000 across the three Phoenix stores—up from around $13,000 the stores earned for the same weekend in 2019. While Graciani said sales are tapering down some, there is hope for continued customer interest.

“The customers were just elated that we were open,” Graciani, who attended the reopening, said. “They actually thanked us for not opening any sooner, which is interesting, [saying things like,] ‘You know, you guys could have remained open. I heard that you closed to protect everyone. We respect that of The Salvation Army—that’s one of the reasons we love you guys so much.’ And so it was pretty cool to hear that positive feedback from our customers.”

The ARC Command is monitoring the Phoenix Main, Greenway and Chandler locations that reopened May 15—to gauge when it will be appropriate to open the rest of the Phoenix stores.

“We want to make sure they’re able to sustain those three stores before we open any more stores, so we can maintain that positive income stream,” Graciani said. 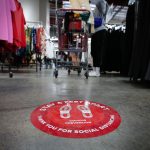 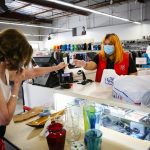 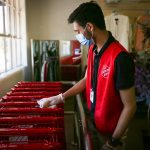 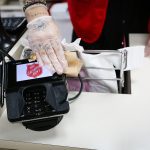 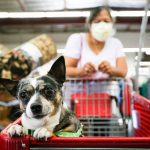 A Salvation Army Pasadena Thrift Store shopper and her dog. 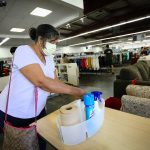