Neurofeedback treatment is helping veterans, recovering addicts and everyone in between find peace from the noise within. 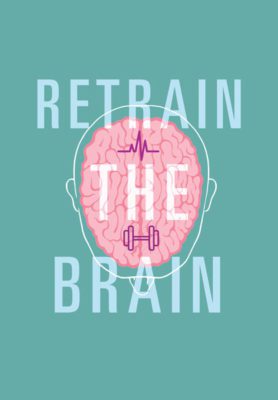 On the campus of a homeless shelter billed as “one of the largest west of the Mississippi,” it’s a small, dark room comparable in size to a walk-in closet that’s generating much of the buzz.

Inside, residents of The Salvation Army Bell (Calif.) Shelter sit in chairs with electrodes affixed to their heads, headphones cupped over their ears, and clutching teddy bears as they watch scenes from “Happy Feet.”

Dr. Carol Kelson explains: “They’re not consciously trying to do anything. All they’re doing is watching the movie.”

It’s true—but unbeknownst to them, their brains are hard at work, retraining themselves through neurofeedback, also referred to as electroencephalogram (EEG) biofeedback.

Before a session, the clinician attaches the electrodes at selected points to a client’s scalp, and the information on brain activity is immediately reported to the client through visual, auditory and tactile stimulation.

The movie screen shrinks or grows, the teddy bear vibrates, and the headphones deliver frequencies, all based on the brain’s activity. As the brain gains awareness of its activity, it subconsciously shifts its behavior toward a more stable state. As the brain waves alter moment to moment, the clients gain awareness of their own bodily responses, and then learn to use them for healing.

The protocol is 20 hour-long sessions for lasting effect because according to Kelson, it’s a training—not a treatment.

“We’re not here curing symptoms,” Kelson said. “We’re just training the brain to operate in a more regulated way, and as a result of that, things improve. We can’t get rid of certain things. We’re not going to get rid of schizophrenia, bipolar [disorder], but we can give them a better quality of life.” 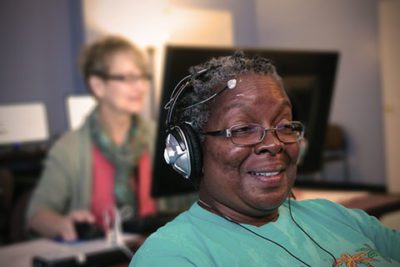 Bell Shelter, which houses about 200 people in total—many of whom are veterans—launched its neurofeedback clinic in 2013 as a pilot program to help reduce PTSD symptoms in veterans at the shelter.

Kelson, who runs her own neurofeedback practice in Los Angeles, conducted a study evaluating the impact of neurofeedback on 10 Bell Shelter veterans with PTSD. Every one showed significant symptom reduction.

Consequently, many residents began publicizing the program among themselves, particularly raving about improved sleep.

“For anyone who’s been traumatized, whether it’s sexual abuse or combat, there’s a part of your brain that doesn’t want you to be able to sleep because you’re vulnerable when you sleep,” said Paul Wager, Bell Shelter clinical director of programs. “Bad things can happen, so it’s really a protective mechanism in a sense.”

Kelson said the program now serves anywhere between 18-25 vets, with several more on a waiting list.

“We have a waiting list just from people hearing about it from each other,” Kelson said. “That’s the nice thing about what has happened here. It’s all been word of mouth in The Salvation Army. It started with the [PTSD] study and the people who were being treated in the study talking about it to other people and then other people wanted to come and get the treatment.”

To date, the program has served over 150 men and women, both veterans and non-veterans.

According to Wager, the program has had so much success it’s even spawned another neurofeedback clinic at The Salvation Army Haven in Los Angeles, which specifically serves veterans. With equipment donated by EEG Institute’s nonprofit Homecoming for Veterans, clinicians at The Haven have started treating male and female veterans with neurofeedback.

Susan, a U.S. Army veteran, was living in her car before she came to Naomi House, The Haven’s emergency and transitional shelter for women veterans.

After years of dealing with nightmares from the sexual abuse she experienced while serving, she had a stroke, which caused her to lose her job. So, she packed up her car with her valuables, gave everything else away, and hit the streets.

“I always tried for the longest time to get back to the old Sue,” she said. “I finally came to the realization with [my therapist] that I can’t go back there because my brain is permanently changed.”

Since being at Naomi House, she said she’s welcomed neurofeedback to help her get to a new place—perhaps somewhere better than she’s ever been.

“I was comfortable with them messing with my head,” she laughed. “I’m sleeping better, and I haven’t had nightmares since I’ve started this.”

With several other Naomi House residents also receiving neurofeedback, she said she’s even noticed a change in the collective energy of the building.

“I want my health to be as good as it can be,” she said. “I have heart disease, so I need to keep my anxiety down. When I left my first session, I felt like I wanted to dance. I just felt so happy, and I was smiling. My sleep is so much deeper now, and I’m so much more calm.”

Yet if neurofeedback is as effective as many of its results might indicate, why has its mass acceptance been so elusive?

“It always takes time for a new treatment option to reach mainstream status in the medical field,” Wager said. “Whenever there’s a new paradigm, you’re running into the old paradigms, like psychiatry, where a pill fixes everything. So, psychiatrists think everything is brain chemistry as opposed to normal activity.”

But, according to Ben Miller, neurofeedback coordinator at Bell Shelter, they’re starting to come around. Neurofeedback is now an evidence-based practice (EBP) for ADHD, and soon enough, it may become an EBP for PTSD as well.

“If we had the money to send clinicians to every doctor’s office and push it, then it might be a little more accepted,” Miller said. “One of the things we were told was that in order for it to get a little more mainstream, is it kind of has to bubble up. It has to get so much noise that it can’t be [ignored].”

According to Wager, they are planning to conduct a three-site study with Bell Shelter, The Haven, and a third clinic they’ve set up at Del Amo Hospital, examining neurofeedback’s impact on PTSD sufferers at each location. One of its goals would be to push the American Psychological Association to include neurofeedback as an EBP for the treatment of PTSD.

“Once you do that, funding, insurance companies—everything changes when you can show it’s an evidence-based practice,” Wager said. “[For] clinicians, people who work with PTSD, there’s no doubt in our mind that it’s working.”

Several reports have documented the effectiveness of neurofeedback as a treatment for drug addiction as well. In a 2007 study, researchers from EEG Spectrum and CRI-Help organized 135 drug rehab patients into two matched groups, one experimental and the other a control group against which the test subjects could be compared. Both groups received standard 12-step treatment. The experimental group also received 40 to 50 neurofeedback sessions directed toward improving cognitive function and mood regulation. Over 50 percent of experimental subjects remained drug-free a year later. 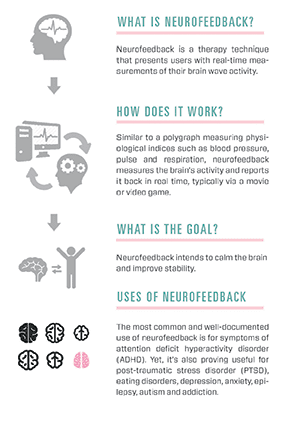 “Neurofeedback seems to offer something none of the other treatments offer, which I think is the ability of the brain to regulate itself better,” Wager said. “The calming and stabilization of brain function seems to really help with substance abusers to reduce their cravings and their desire to self-medicate.”

Dylan, 40, came to Bell Shelter a year ago, after a brief stint of homelessness and a two-decade long battle with alcoholism and addiction. After one week of neurofeedback, he, too, noted improvements in sleep.

“My sleep was horrendous,” he said. “Now, I’m able to sleep a full six to eight hours instead of waking up every two hours.” He also noticed positive changes in his anger, anxiety and cognitive thinking, in tandem with the education he’s received at the facility’s Wellness Center.

Dylan said he now finds himself going through Post-Acute Withdrawal Symptoms (PAWS)—which occur as an addict’s brain chemistry gradually returns to normal—much quicker, and there’s “no doubt” in his mind that it’s because of neurofeedback.

“[PAWS] is basically your brain healing from all of the damage you’ve done from the addiction, alcohol,” he said. “Now when you go through this, you go through these feelings and emotions that have no root or cause—it’s just your neurotransmitters trying to heal themselves. Neurofeedback helps with this tremendously.

“[Neurofeedback] really helps all areas: education, observing, retaining information, being able to have the patience to just sit and learn,” he said. “That’s one of the biggest things that addicts or anyone with PTSD suffer from—how are you going to get this information in your head if your head’s not working properly?”

Dylan is now studying at East Los Angeles College (ELAC) to become a chemical dependency counselor. It’s the first time he’s gone to school since he started using at 16.

As of now, Bell Shelter and The Haven are The Salvation Army’s only two locations conducting neurofeedback, but that, too, could soon change. On a tour of the clinic, Major Kyle Smith, Southern California divisional commander, spoke with a resident who underwent treatment, and that was all the proof he needed.

“He said he was having massive panic attacks multiple times a week and wasn’t sleeping well, but since he started treatment he hadn’t had one panic attack,” Smith said. “He said it changed [his] life.

“I said ‘We’ve got to expand this program any way we can.’”

The adult rehabilitation center (ARC) locations in Southern California could be a potential landing spot.

“Take something on the clinic level and mix it with the spiritual level, the impact could be tremendous,” Smith said. According to data collected by The Salvation Army Western Territory, only 10 percent of ARC graduates not placed into housing upon completion of the program maintain their sobriety. Those that are placed into housing, however, see an 85 percent success rate.

“I like to think if we throw neurofeedback in there, that number could go up even more,” he said. “At the end of the day, it’s just another tool in people’s toolbox to get well.”