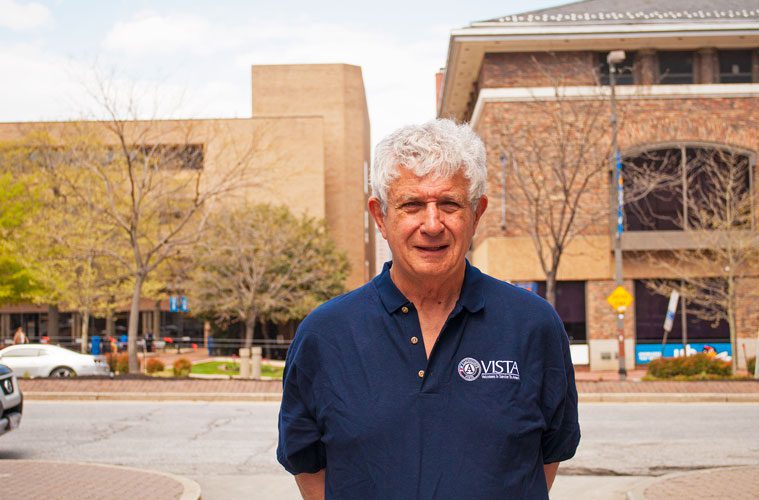 It’s the summer of 2015 and I’m a newly retired 67-year-old reporter. I’m bored. During my four-decade career, I covered lots of breaking news, including at the White House and Congress. It’s over. I need a new adventure.

So, after months of searching, I finally find it—at least the start of it—in an old farm converted into a convention center and hotel in Blue Bell, Pennsylvania, a suburb of Philadelphia.

“Hi, my name is Tom,” I say, reaching out to shake hands with my roommate, a 23-year-old recent graduate of North Carolina University. “Joe,” he replies, showing no sign of shock that I’m old enough to be his grandfather.

“Welcome to VISTA [Volunteers in Service to America],” we tell each other.

During the next four days, Joe and I study side by side with 150 mostly young people in a crash course on being a member of AmeriCorps VISTA, the half-century-old national service program dubbed “The Domestic Peace Corps.” It fights poverty.

Consider this: In 1961, President John F. Kennedy, in telling Americans—“Ask not what your country can do for you, ask what you can do for your country”—began to popularize rocket science and fighting poverty.

Americans responded by reaching Kennedy’s goal of “putting a man on the moon by the end of the decade.” But more than a half century later, millions of Americans are still in poverty.

Since 1964, when Kennedy’s successor, President Lyndon Johnson, created VISTA as a centerpiece of Johnson’s “War on Poverty,” followed by Medicare and Medicaid, the national poverty rate has fallen from 19 percent to a still stubborn more than 12 percent.

During my first VISTA class, the teacher asks: “What is poverty?”

We write our answers on sheets of paper taped to the wall.

“Lack of education,” adds another.

I hear the best response at the end of the week by a VISTA who had just completed her year of service in Baltimore, a city rocked by racial violence a few months earlier after a black man died of injuries suffered while in police custody.

“Poverty is not a figure in a banking account,” she said. “It is the systematic denial of basic services.”

Indeed. A person could work 40 hours a week at the federal minimum wage $7.25 an hour, and end up far below the national poverty level of $20,780 a year for a family of three. That would leave them in need of basic services, lots of them.

Much of VISTA training is aimed at getting us to know more about poverty, discrimination and each other.

I tell classmates about my experience as a recent retiree who had worked at three major news agencies: United Press International, Bloomberg and Reuters.

I thought I could quickly get a new job, perhaps in the press office of a national nonprofit. But I got rejection after rejection from such groups that seemed to prefer people half my age or younger.

“I got to know what it’s like to be discriminated against,” I said. “But in a way, I feel fortunate. All the rejection led me to VISTA.”

At the end of the fourth day of instruction, we raised our right hands and were sworn into VISTA for a year of service. Since its inception, more than 220,000 mostly young volunteers have served in all 50 U.S. states and the five major U.S. territories.

We generally worked 40 hours a week and received a “living allowance” based on the local cost of living (about $600 every two weeks for me). Our mission is to increase the capacity of existing anti-poverty projects in cities and towns across the country.

As President Johnson told the first VISTAs, “Your pay will be low; the conditions of your labor will be difficult. But…you will have the ultimate reward, which comes to those who serve their fellow man.”

I help recruit and train volunteers, organize job fairs, and raise money, including a surprise $100,000 check from a wealthy donor. In addition, I write press releases and op-eds, and build partnerships with outside groups, including churches, fellow nonprofits and businesses.

I spend my first year as a VISTA with Building Families for Children (BFC) in Columbia, Maryland, a century-old, faith-based non-profit that provides specialized training for foster parents with traumatized foster youth.

BFC also helps prevent at-risk children from being placed in foster care by training volunteer “host families” to temporarily house them. This gives their parents time to find a job, secure a place to live and do whatever else is needed to provide a safe and nurturing home. 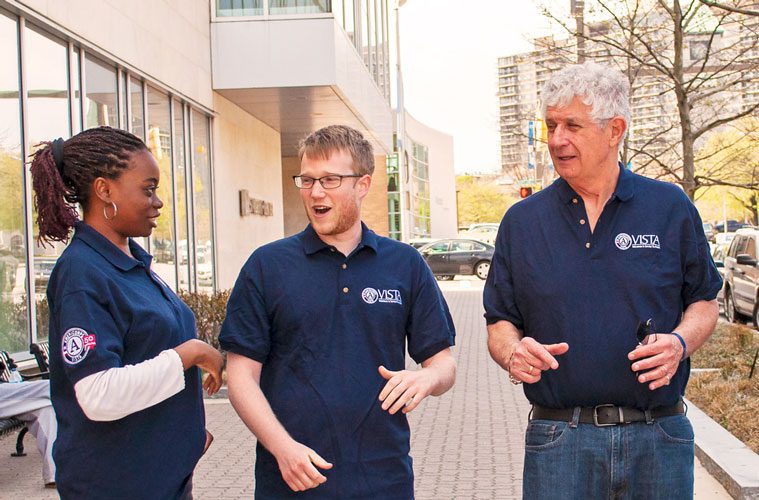 On a Friday night, I get a call from a mother with three young children who just had been evicted from their apartment and need a place to stay.

I make a few calls, and help the mother and children spend the weekend free at a motel. On Monday, she’s again looking for a place to live and refusing to let go of her children—even for a day or so.

“I can’t give up my kids,” she said when I suggested that she let one of our “host families” temporarily care for them. “No,” she says.

I never hear back. But I wonder if I was this mother, would I turn over my children to strangers while I try to straighten out by life? I don’t know. But I can’t fault her for saying no.

I visit Robin Reynolds, a school nurse and a married mother of three grown children in Catonsville, Maryland. She’s been a foster mom since 2002. Over the years, she’s taken in more than 20 foster youth. They call her “Ms. Robin.”

“I treat them all like my own kids,” she said.

They include a child who entered the foster care system after being found digging through trash for food. Another had been sold for drugs by her addicted mom. A girl asked to live with Ms. Robin, but got shot and killed before she could move in.

I would say foster children are America’s most vulnerable boys and girls. Nationwide there are more 440,000 of them at any given time. They have been abused, neglected and abandoned. A disproportionately high percentage of them end up dropping out of high school, unemployed, in poverty, addicted to drugs, recruited by sex traffickers or in jail.

Former foster children are nearly twice as likely as U.S. combat vets to suffer from Post-Traumatic Stress Disorder (PTSD). Each year, about 23,000 young adults age out of foster care without being placed in a permanent home. One in five immediately become homeless.

These and other numbers suggest that fighting poverty isn’t only tough, but that it’s often seemingly impossible to win. It can be frustrating, even demoralizing.

“You can’t help them all,” a social worker tells me. “But you can help some, and they can help others. You can help them break their family’s generational cycle of foster care and poverty, and that will help their children and grandchildren.”

It makes sense. One at a time. Incremental progress. At the end of my first year as a VISTA, I sign up for a second.

With advocates speaking up for their basic needs, these children generally do far better than those without such support.

Begun in 2001, CASA/Prince George’s County seeks to provide one advocate for every foster child in the county. But at this point, it has enough volunteers for only about a third of the county’s 500 foster boys and girls.

They include a victim of repeated abuse and neglect who bounced in and out of eight foster homes in nine years. With the help of CASAs, she becomes among the just 3 percent of young people who graduate college after aging out of foster care.

“For the sake of countless children, we could use a lot more [advocates],” she tells me. She owns her own business.

I also meet a young woman who’s paralyzed from the waist down as the result of being shot during her attempted robbery of a liquor store in 2015. She endures multiple surgeries, months of rehabilitation and a year in jail. In the summer of 2017, this ex-inmate appears before a judge who rules it is time for her to age out of foster care. At 21, she must go.

Minutes later, she’s outside the courthouse in her broken wheelchair, awaiting a cab ride to a homeless shelter.

In the winter, a CASA supervisor and I visit her. She’s struggling. She lives in homeless shelters, on the street and then for a night or two on the couch of a friend. Then she resumes the cycle. Unemployed, she receives a monthly disability check.

“It doesn’t last the whole month,” she said. “I was a foster kid because my mother died when I was 13 and the rest of my family walked out on me. I’d never wish this on another kid. It’s not fun. It’s not safe.”

Months later, she’s back in jail for a probation violation.

I finish my second year as a VISTA, but I’m not ready to leave. I remain at CASA/Prince George’s County as a volunteer, mostly writing press releases and profiles of CASAs to help recruit volunteers.

This spring, I attended the volunteer appreciation dinner. There I see is Malca Giblin, the longest serving volunteer. She began in 2003 as an office helper and soon became a CASA. She earlier worked with at-risk children at the Prince George’s County Department of Social Services.

“I do it because I know of the many problems in the [child welfare] system,” she said. “I see myself as someone trying to make a difference.”

Over the years, Giblin repeatedly made a difference. She helped a foster child beat the odds and graduate college. She helped ensure adequate care for a teenage boy born HIV positive. She helped move a child from an unsafe foster home and into safe one.

Her words and deeds epitomize what I learned as a VISTA: Fighting poverty is tougher than rocket science, and, more importantly, it’s worth the effort.

Thomas Ferraro, a native of New Jersey and a 1970 graduate of the University of Maryland, was a news reporter for more than 45 years, working at United Press International, Bloomberg News and Reuters where his beats included the White House and Congress. After he retired, he spent two years with AmeriCorps VISTA, the national anti-poverty service program,  and then volunteered at a non-profit for foster children.