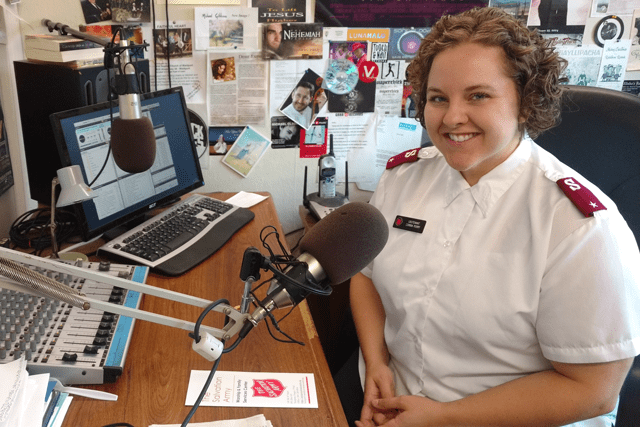 Listeners drawn to corps after hearing sermon on the radio.

Sunday mornings are particularly busy for Lts. Nathan and Corrin Perry, Corps Officers in Newport, Oregon. In fact, for listeners of KWPB-FM, the local Christian radio station, the Perrys might seem to be in two places at once.

Each week, before heading to the Newport Corps to lead the Sunday worship service, the Perrys broadcast a sermon live on KWPB-FM at 10 a.m.

While many churches focus on video platforms such as Periscope, Facebook Live and YouTube Live to distribute their messages, radio remains a viable outreach tool.

The Perrys arrived as Newport Corps Officers in July 2016, and quickly learned that the tiny town—population 10,000—was more than a seaside stop for people passing through; it was a tourist haven. During peak times, the population grows tenfold, with most visitors coming into town for weekend getaways. Perry said he’s heard from people who chanced upon the radio show.

“The radio show is a perfect opportunity to share God’s Word and provide an offer of salvation to those who are passing by or staying for a few days,” he said. “We have even had listeners come to the corps who heard the show and wanted to learn more about God and The Salvation Army.”

While tourism provides a larger audience, visitors are not the only people tuning in to the program. The station broadcasts year-round, and during the off-peak season it continues to carry the Perrys’ messages, reaching those who are sometimes forgotten: individuals who are shut-in and unable to worship with other believers. The sermons always include the corps’ information so that listeners can reach out for personal contact.

“Ultimately we still want tangible relationships with our listeners,” Corrin Perry said. “We do not want the show to act as a distant voice to the masses, but use it as a tool to build rapport. We want people to know that The Salvation Army is here in Newport and helping them in the name of Jesus Christ.”

The Perrys appreciate the additional outreach the radio ministry provides.

“[This is] a real blessing and a great opportunity,” Nathan Perry said, “And it is all gifted to us by the radio station.”