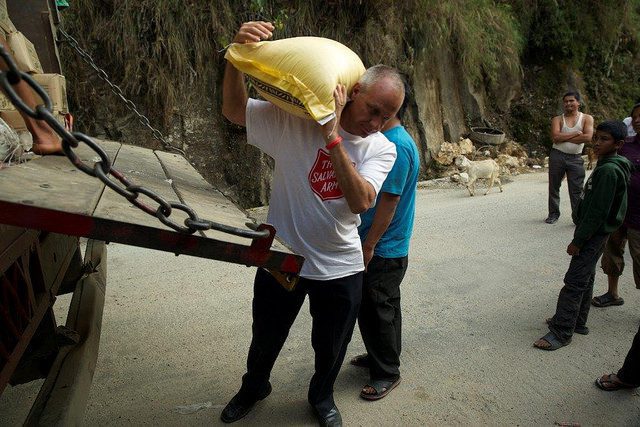 The Salvation Army in Nepal distributes food to mountain communities

Helped by local volunteers, team members in Kathmandu loaded a truck with rice, dhal, oil and salt and drove it to Sindupalchok District. The district is not far from Kathmandu but remains one of the least developed areas of Nepal.

The earthquake has made all journeys very difficult, meaning that the distribution team, including local volunteers and members of the SAVN.tv film crew, took more than four hours to reach their destination, arriving at nightfall. The distribution center was at a resort that usually hosts tourists looking to take part in activities such as bungee jumping and rafting. In recent years the area has become famous for its white-water rafting.

Heavy bags of food had to be carried up some stairs and across a footbridge. The owner of the resort was supportive, not only allowing The Salvation Army to use her facilities for storage and distribution but also accommodating and feeding the team overnight.

The distribution was planned for late morning once the rest of the emergency team had arrived. Over the next few hours they distributed rice, dhal, oil and salt to 445 households in nine villages. All of the villages are fairly remote, which meant many of the beneficiaries had to carry the food up the mountain for several hours. Despite these difficulties, however, the recipients were extremely grateful for the support they received.

“I would like to express my gratitude to the international and local team members who are all working tirelessly, and also to the Salvation Army territories and other donors from all across the world who support this important work,” said Damaris Frick, International Emergency Services field operations officer. “Because of your generosity, 445 families will have something to eat tonight and for the coming days.”

Visit www.salvationarmy.org/nepalearthquake to make a donation in support of The Salvation Army’s #NepalEarthquake appeal.