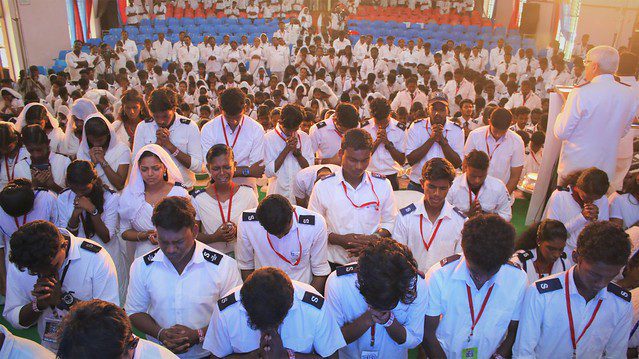 The Call to Mission of international Salvation Army leader General Brian Peddle inspired 750 delegates to the 28th Territorial Youth Congress of the India South Western Territory, held in early May at Adoor Marthoma Youth Centre, South Kerala. On the final day of the “Ready to Serve” event, more than 500 young people encountered the Holy Spirit and dedicated themselves to God. India South Western Territory Chief Secretary Lt. Colonel Joginder Masih delivered the keynote address at the outset of the congress, which also provided opportunities for the young delegates to consider matters of academic discipline, careers guidance, cyber protection and The Salvation Army’s doctrinal perspective on the sacraments. A campfire on the second day served as a visual metaphor for the consumption of all that hinders the unity of the Church. The event was underpinned by prayer, with 24-hour prayer chains continuing throughout the four days of the gathering. Social media tools such as WhatsApp and Facebook Live were used to ensure that Salvationists elsewhere in the territory and around the world could take part in the worship, teaching and prayer. Many delegates took part in cultural programs and performed different types of music and dance on stage. A high standard was maintained, with skilled performances across various genres. God-glorifying talent competitions also celebrated individual and group achievements throughout the territory. The congress served as the launch of the Salvation Army Mission Network, intended to create opportunities for those outside the Church to encounter Salvationists with a contemporary, relevant, 21st-century faith. To this end, the streets of Adoor City were filled with Salvationists for three hours during a public march of witness. Participants of the march shared the Christian message creatively through music, flags, placards and words from Scripture amplified by a mobile public address system.

As Territorial Commander Colonel Nihal Hettiarachchi brought a final Bible message to the congress attendees, an astonishing 520 young people—nearly 70 percent of the delegates—felt the call on their lives and made a public act of commitment at the mercy seat. Twenty-nine of the respondents sought prayer specifically in response to the call to become Salvation Army officers.