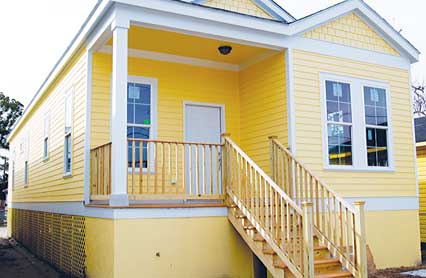 The Salvation Army’s response to the hurricane continues.

New homes are being built in New Orleans through The Salvation Army's EnviRenew program. Photo by Christin Davis

In the five years since Hurricane Katrina first made landfall in the Gulf Coast in August 2005, The Salvation Army has assisted over 2.6 million people.

Eight distribution centers along the Gulf Coast allowed over 106,100 pre-registered families to shop for free donated goods such as furniture and large appliances.

Over 2,200 homeownership partner grants were distributed evenly to Louisiana and Mississippi.

The Army allocated resources for job training and re-employment services to help at least 5,000 people who became unemployed as a result of the hurricanes, in cooperation with partner organizations.

Long-term response
A series of programs continue today across the Gulf Coast to enhance community resilience.

The Emerge program is working to improve attendance rates at area middle and high schools. To date, 19 of the 21 local Emerge schools average 92 percent attendance.

“Through EnviRenew and Emerge, The Salvation Army will uphold its dedication to the recovery of New Orleans until the day people return and once again prosper in their hometown,” said Captain Ethan Frizzell, New Orleans area commander.

On Aug. 26, the Army hosted a “Resiliency Summit” in New Orleans to bring community leaders together to discuss these and other long-term recovery efforts in the city.

In Mobile, Ala., The Salvation Army opened a new shelter for women and children in July 2010 on the site of a shelter destroyed by Hurricane Katrina. The new shelter will house up to 50 homeless mothers and their children and provide case management, childcare and educational opportunities.

In Biloxi, Miss., The Salvation Army began construction on a 52,000 sq. ft. Ray and Joan Kroc Corps Community Center in an area devastated following Hurricane Katrina. The $16 million center, which is scheduled to open in late 2011, will feature a water park, fitness center and performing arts space. The new building is on the site of Yankie Stadium—where the Army previously operated a “volunteer village” for Katrina aid workers.

“A building like this (Ray and Joan Kroc Community Center) will change the dynamics of this community,” said Lt. Governor Phil Bryant of Mississippi.