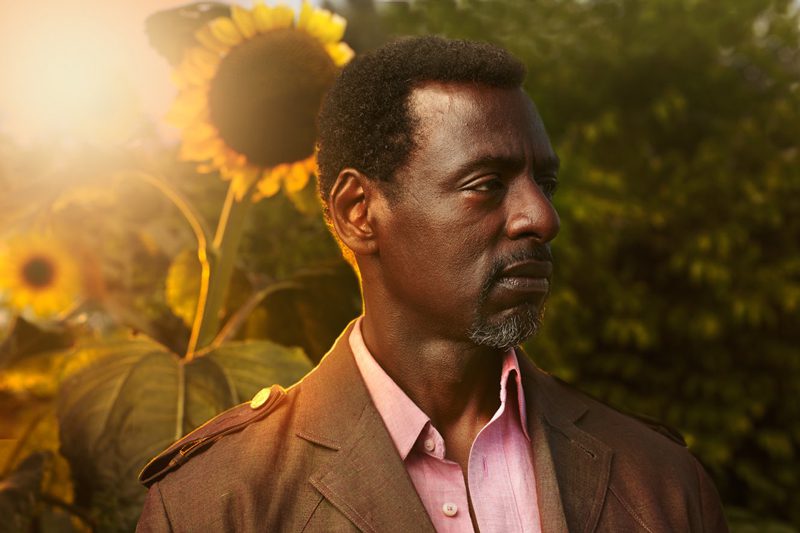 ‘It all starts in the soil’

Ron Finley threw some seeds in the ground and got the whole world talking food in 2011. Now he’s transforming a vacant lot behind LA’s oldest library into a food forest.

Ron Finley never had much trouble with the law—until he planted a garden.

The South Los Angeles native planted some jasmine, rosemary, lavender, then some bananas on a parkway in front of his house one day in 2011, in hopes of beautifying his block.

One of his neighbors tipped off the city, and they cited Finley.

As it turned out, it was illegal to plant vegetable gardens on “public parkways” owned by The City of Los Angeles, according to the Los Angeles Municipal Code. Finley was flummoxed. He could toss garbage, unwanted furniture, a broken toilet on his parkway, but the second he plants a carrot on it, he’s being punished?

So, Finley thought, why stop at parkways? L.A. had 26 square miles of vacant dirt lots.

Worse yet, South LA. makes up one of the United States Department of Agriculture’s (USDA) designated food deserts, or “food prisons” as Finley calls them—geographic areas where nutritious, affordable food is difficult to obtain.

Indeed, coronary heart disease outpaced homicide as L.A. County’s leading cause of premature death in 2013, according to the Department of Public Health. So, Finley fueled a “guerrilla gardening” movement, planting kale, sugar cane, oranges, Swiss Chard—anything that grows—on vacant lots throughout the city, in schools, parks and homeless shelters. He wanted to educate his struggling neighbors to nurture their own food, know its origin, and create and maintain healthy eating habits. “What turned me is I went to the store one day and saw a tomato that says ‘coated with shellac to preserve freshness,’ Finley said. “I’m going, ‘shellac? Isn’t that what we used to put on wood in wood shop in junior high? I need that on my tomato? Really dude?’”

In 2013, Finley delivered a TED talk on guerrilla gardening, opening up about his dream to make gardening “gangsta.” He dropped his now famous line: “Growing your own food is like printing your own money.” Since then, he’s toured, spreading what he calls his “gospel.”

“What I’ve done has spread around the world—literally,” he said. “I’ve been to places from Qatar to Oman to Greece to Sheffield University, and I’ve got people from Africa to South Korea. Someone sent me a clip of a guy talking about me on the news in Brazil because they took over this lot. ‘We took this over because of Ron Finley in South Central’…What’s happened is bigger than what I thought—way bigger—but still in line with what I thought.”

Community gardens in the U.S. can be traced back to 1890s Detroit. Social and educational reformers promoted them as educational tools to help instill strong work habits in youth. Technologies such as aquaponics and hydroponics have since ushered in new possibilities, but the basic concept has remained largely unchanged.

Finley takes the assertion one further.

“I want garden communities, not community gardens,” he said. “You want to make it where it’s communal, where people are involved with each other, and they [converse] and they’re like, ‘well, what is that purple thing over there?’ What do you guys do with that?’ You want to bring different nationalities together and different food together and different experiences into the garden to make the bouquet.”

When he started in 2010, he admits he wasn’t exactly a master landscaper.

“[I knew] that there was this stuff called soil and that you add water and that you needed some feed and some sun,” he laughed.

“These are things that were installed in most of us in elementary school but we didn’t use it as a thesis of survival. Gardening is a survival skill and we’re not teaching it like that. It’s not just something that’s frivolous, fun—it’s a survival skill. Everybody should know how to provide for themselves. Everybody is enslaved by the food system and nobody realizes it. It’s convenient food. How convenient is it? It’s killing everybody, slowly. And that’s what this fight is––showing everybody how to form a resistance. Grow your own food so you know what’s in it.

“I’m no different than you. I’m not even a gardener. I’m a fashion designer,” he said.

But if you ask him, the contrast between the two isn’t as stark as you might think.

“It’s not. It’s just another palette,” he said. “One of them you deal with fabric, the other you deal with soil. Two different kinds of canvas—same thing. Now my paint is not thread, my paint is flowers and different colors. Look at the colors in nature. What did we use? We replicate the colors in nature in everything we do. People think it’s a stretch but when you really break it down, you get to paint on your canvas.”

His latest passion project, or HQ (headquarters) as he calls it, involves transforming a vacant one-acre lot behind Vermont Square Library, L.A.’s oldest, into a bustling urban forest. He envisions an epicenter for community and creativity. “I want this to be the driving force for the new social responsibility, urban renewal platform that’s taking over the city,” he said.

The logic is sound, but could these types of projects really help people change their eating habits, their lifestyles? A study in the Journal of Nutrition Education and Behavior showed that a group of adults in Flint, Mich., who either lived with someone who participated in community gardens, or who participated in one themselves consumed fruits and vegetables 1.4 more times per day, and were 3.5 times more likely to have five fruits and vegetables a day, than those with no involvement.

“When you think of what you eat affecting you, and how it affects your mind and body this is going to have your brain in a different place,” Finley said. “This food is numbing you, numbing your environments. That changes people’s mindset. Instead of bright and beautiful and shiny, it’s grey and beige. Yes, it’s going to change poverty, because people are now healthier and they’re caring about themselves and they’re going to live longer. It’s an awakening.”

Yet, the potential benefits of urban gardens may extend beyond poverty. A Journal of Environment and Behavior study found that aggression and violence was notably lower among people who lived near a green space than those who did not. It did not examine the effects of community gardens specifically on violence, but Finley thinks it’s reasonable to extrapolate the findings.

“This is real,” he said. “It’s going to affect your mind. Greens and fresh air and the hummingbirds and the dragonflies. I have seen it. I don’t need your statistics, you’re thousand, million dollar surveys over five years. I have proof of concept right in front of my face. Gardens change people, dude. And they build communities. If people see beauty, they’re more inclined to keep it or to replicate it.”

“I don’t grow food. I grow people, then they grow the food. The first things we have to do is change people’s lifestyles, their cultures, their headsets. And that’s hard, but just imagine if everybody on the block communicated with everybody. Crime is going to go down.”

Finley’s work has sparked the interest of many notable persons, including policymakers. He recently met Ari Emanuel, co-CEO of the entertainment and media agency William Morris Endeavor. Emanuel praised Finley and connected him to his brother, Rahm Emanuel, former White House Chief of Staff and current Mayor of Chicago. The two are scheduled to meet to discuss urban gardening in Chicago, home to several food deserts.

“Food is a problem around the world,” Finley said. “People want their food back. People want to be healthy. I think it’s growing and growing and that’s what I’ve learned. We’ve been slowly stripped of our nature in the sense of ‘we’re nature.’ We’re part of this ecosystem. It’s not around us; we’re a part of it. We’re the soil.

DO GOOD
-Visit the American Community Gardening Association to learn how you can get involved in your neighborhood.
-Learn more about Ron and support the Ron Finley Project.
-View county by county data on food deserts.
“Think about it if we start growing our own food look at the system we eliminate,” he said. “Look at what we eliminate but look what we gain. It’s not calculus. Now, you’re dangerous because you’ve weaned yourself off a system that is dependent on you.”

If you want to take part in the urban revival, Finley has a word of advice: don’t overthink it.

“Just get in the soil and you can garden,” he said. “You can actually get a bag of soil and put holes in it and put plants in it and stuff will grow. Try to get your neighbors involved and just be an example. Some people get it tactilly, some visually but I think everybody is tactile in that if you touch it and you do it, that’s a memory you’re going to keep. Be that example. The way I see it, everybody is an artist. Whether or not you think there is art in you, you’re an artist.”