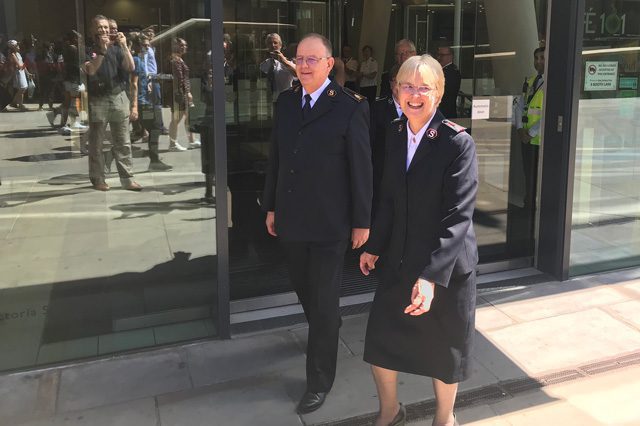 A sense of thankfulness and optimism pervaded the International Headquarters (IHQ) farewell meeting to General André Cox and Commissioner Silvia Cox, World President of Women’s Ministries, ahead of their Aug. 3 retirement.

After an opening congregational song, Lt. Colonel Rob Garrad, Executive Secretary to the General, mentioned in prayer the mixed feelings of joy and sadness being felt by the international leaders and all those present. He thanked God that the “fragrance” of the leaders’ presence “hovers over the international Salvation Army.”

A light-hearted video about what to do with a retired General was followed by a choir made up of IHQ staff and officers singing “Find Us Faithful,” leading the congregation into moments of contemplation. 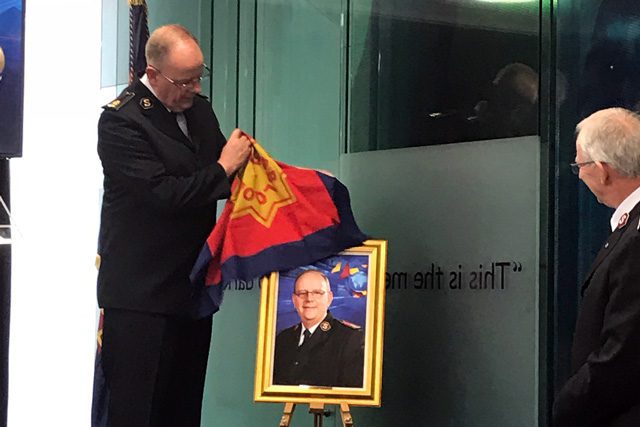 Commissioner Marieke Venter, Zonal Secretary for Women’s Ministries, South Asia, revealed that she had conducted research among other officers to see how best to describe the General and Commissioner Cox. She had narrowed it down to 10 words: commitment, optimism, humor, presence, Africa, equality, passion, integrity, love and family. She made particular mention of their approach to difficult issues, saying that they were “not prepared to put anything in the ‘too hard’ basket.”

Matthew Carpenter, IHQ Head of Finance and Company Secretary, spoke about the privilege of sharing “small moments” with the Coxes, such as the opportunity to chat in the cafe or while waiting for an elevator, as opposed to the “great moments” they experienced during their international travels.

He praised the General for the character he had shown in both small and great moments, giving special praise for the “momentous, ground breaking and significant changes” brought about through the Accountability Movement. 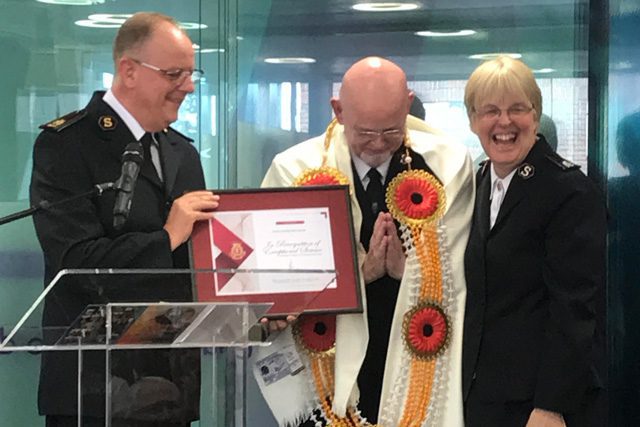 A clearly moved Silvia Cox spoke about God making “everything beautiful in its time.” She shared the many seasons she and the General have faced during their officership—in Switzerland with a young family, a time of learning in Zimbabwe, readjusting to Western life back in Switzerland, off to Finland while their children remained behind, then on to South Africa and the UK.

She said the past five years at IHQ and traveling the world has been “a time of challenge, joy—everything!” but added that she was thankful to God for all his blessings.

Major David Williamson, Private Secretary to the General, gave the Scripture reading and led the congregation in “the Army’s sacramental song”: “My Life Must be Christ’s Broken Bread.” Chief of the Staff General-elect Commissioner Brian Peddle then called the international leaders to the platform to unveil the portrait of the General that will take its place outside his office, alongside portraits of his predecessors.

The General explained that he had requested that the portrait include a globe and symbols from the 2015 Boundless International Congress. 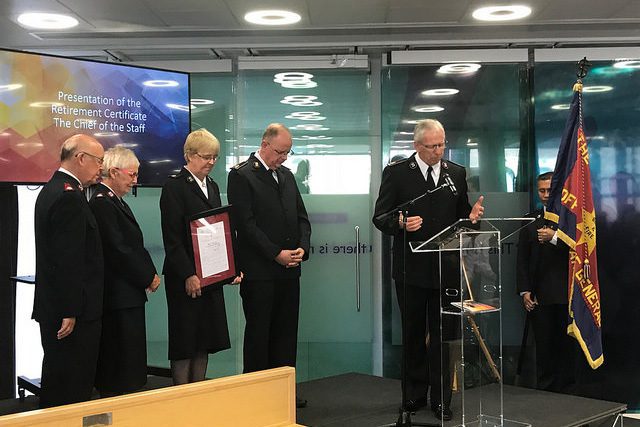 Presenting the Coxes with their retirement certificate, the Chief said he did so “on behalf of a grateful Salvation Army.” In his prayer for his colleagues, he thanked God for “lives that have been spent for you.” The international leaders were joined on the platform by Majors Gordon and Ruth Downey, who had been their support since they were in the training college.

The General began his response by saying that he and Commissioner Cox had been on “an incredible and unexpected journey…we feel enriched!”

He gave special thanks to his IHQ support team, Williamson and Garrad, both of whom he said had been “willing to serve above the call of duty.”

He then called Garrad to the platform and—to his great surprise—presented Garrad with a Certificate of Exceptional Service. Garrad has served at IHQ for a total of 37 years, of which more than 21 have been spent in the offices of the General or the Chief of the Staff (including time working for the General’s father, Commissioner Ron Cox).

Returning to his thoughts, the General had words of challenge for the congregation, which included Retired General John Larsson, Commissioner Freda Larsson, Commissioner Gisèle Gowans, IHQ staff and officers, former IHQ colleagues, representatives from the UK Territory with the Republic of Ireland and delegates to the International College for Officers. “Christian witness is not just about spoken words but how we live our lives,” Cox said.

He warned against looking down on people and referred to the religious authorities who complained about Jesus spending time with the “wrong type of people,” such as tax collectors and other undesirables. 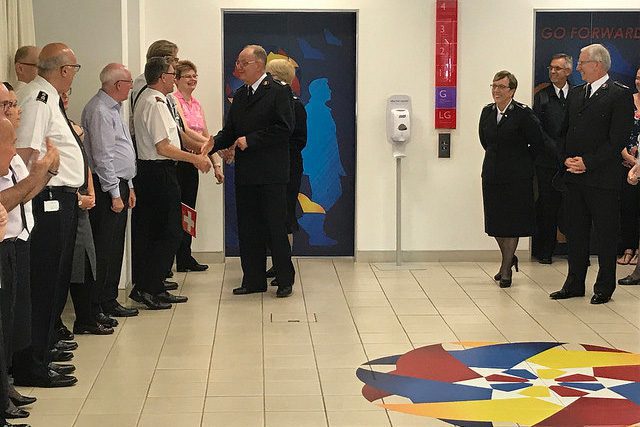 “I wish The Salvation Army was known for its association with the ‘wrong type of people,’” he said. He called for Salvationists to be known for their joy, adding: “We have to roll up our sleeves and get involved in the messiness of life.”

After leaving the IHQ conference room to the sound of the IHQ staff band, the congregation headed to the cafe to enjoy a time of food and fellowship with the General and Commissioner Cox.

Finally, IHQ staff and officers gathered at the door to bid the Coxes a fond farewell. After greeting each person in turn, the General and Commissioner Cox walked out of IHQ and into a well-earned retirement.