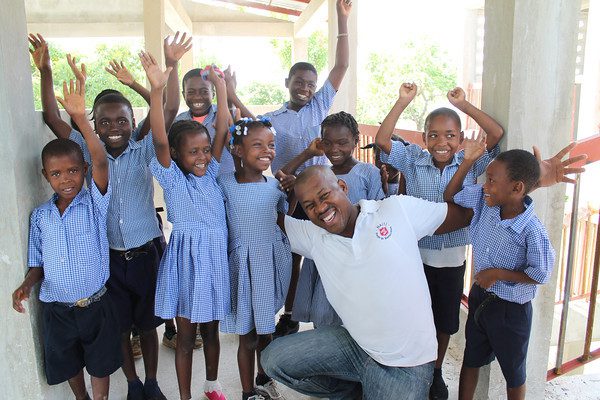 Lessons on faith-based facilitation from Haiti

Poverty is widely viewed as lack of things—food, clothing, shelter, and so on—and is often the principal focus of  aid actors from governmental to non-governmental agencies, faith-based and secular organizations. Yet, there is a growing consensus in faith-based groups that the root cause of poverty is spiritual.

While I would say poverty is both material and spiritual, I think the idea that poverty is broken relationships in four dimensions (with God, others, self and creation), as theorized in “When Helping Hurts,” is a good starting point to launch the battle against poverty in a holistic manner.

These relational frameworks are the basis of The Salvation Army’s community capacity development program that I lead in Haiti. For many decades, Haiti has been labeled by socio-economic standards as the most impoverished nation in the western hemisphere.

Following the massive 2010 earthquake in Haiti, the country faced damage and casualties of unprecedented scale. The Salvation Army—particularly the Salvation Army World Service Office (SAWSO)—developed several initiatives to meet the immediate needs of the affected people.

The long-term recovery program hinges on faith-based facilitation and community development—a five-step, rotating process and a set of tools borrowed from social science to help people address the needs and issues of their communities from the perspective of faith. Our strategy is to train, mobilize and resource officers, church leaders and community members. They then form a Community Action Team, a small community-based, church-driven, and Christ-guided organization that works to transform the community.

Now in over 60 communities in Haiti, this program has equipped 72 officers and 157 corps leaders, who in turn equip more than 1,500 community leaders—including youth, Salvationists and non-Salvationists, men and women—to become faith-based facilitators organized in Community Action Teams to achieve sustainable change in their communities. Over 50 teams are in action throughout the country. 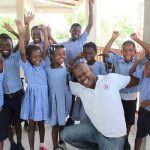 Ready to go plant some trees! 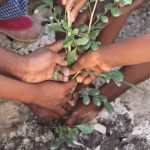 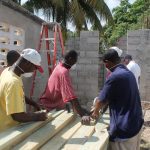 Making the joints for the ceiling joists

This program is based on certain key principles:

Participation: We do not enter the communities and tell people what to do. Alongside the community members, we identify the needs and see what can be done given the strengths and resources of the communities.

Self-support: We believe that each individual, each community has something to contribute. So we do not want to create dependency mentality. We value participation and self-support that will lead to ownership.

Felt-needs: Many times organizations have resources that they want to invest in particular domains that are not necessarily in the interest of the community. This ends up creating lack of ownership and disregard. In this program, we use a bottom-up approach in which we come alongside the communities to identify and tackle the problem that they feel is a problem.

Sustainability: We concentrate our efforts on the initiatives that the Community Action Teams will turn into lasting change. It is understood that we come along not to stay forever, but for the community to take over when we are not there. The product of our intervention should last longer than our presence in the community. When the money ends, the product should continue.

Training includes a community need analysis, project planning and management, the roots of building deeper relationships, and grant writing basics. We practice community walks with facilitators, during which they interview community members about their hope for their communities, the resources available and the challenges they constantly face.

Facilitators learn to use a Problem Tree Analysis to get to the root causes and investigate the effects of a given problem. Facilitators are also led through the process of reflecting on their issues in light of Scripture, and we use role play and theater to facilitate a full assimilation of the training.

As a result of the program, Salvationists, local authorities, and community leaders join together to reflect on and address community issues. Although in limited scale, they have contributed their own resources to take initiatives in their communities, such as soil road construction and maintenance in several rural areas like Couyot and Payant. The Moulin Community Action Team helped a family of nine people living in a shack made in a soil hole to have shelter.

The program also allows for transcending religious boundaries as people of different sets of beliefs join together to reflect and work on community issues. Civic engagement is on the rise as community members in Haiti are together achieving sustainable change.