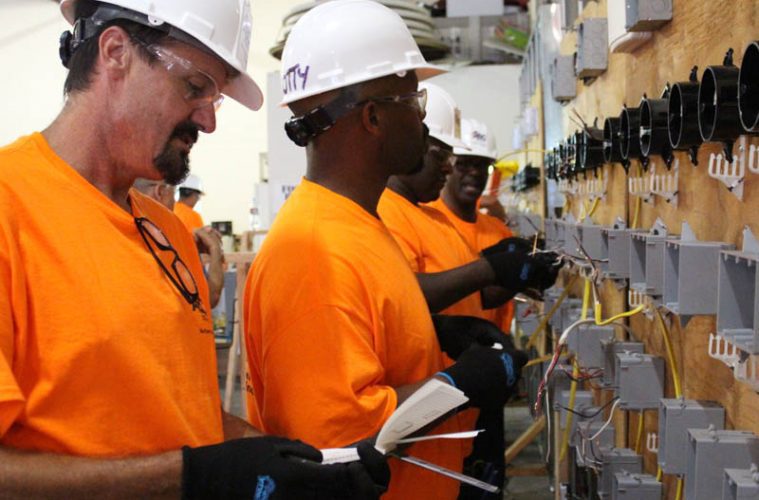 Getting people back to work

Workforce development movement takes off in and around Sacramento.

Construction math, blueprint reading and tool basics are all covered in a week-long construction training program in Sacramento, conducted by The Salvation Army through a partnership with the Associated Builders and Contractors Northern California Division.

Focused on the electrical trade, students receive OSHA-10 safety training and experience hands-on learning, alongside leadership training in accountability and other life skills.

“What I hope participants get out of the program is hope—that they understand they can be employable, that they can be marketable and they can make a difference,” said Sergio Cortez, lead instructor and ABC NorCal workforce development manager. “No matter what has knocked them down in their lives before, what matters is now, and they have their tools and knowledge. There’s no excuses—they can do this.”

That message worked for program graduate Will Davis, who also graduated from a Salvation Army Adult Rehabilitation Center (ARC) and formerly worked as a plumber. He took what he learned to his new job as an instructor and mentor at a non-profit that teaches trades to 14-18 year olds.

“This is a good place to start a comeback,” Davis said. “I took those skills that I learned from the electrical program and I teach these young kids. With those skills, they are ready and employable to go right into the union.”

Davis is a seamless example of getting someone back to work. And helping others build their own success is a mission The Salvation Army in and around Sacramento has taken on. What started with the opening of a culinary arts training program in Lodi, California, more than 10 years ago has grown into a workforce development movement that now includes the construction training program and additional culinary training efforts.

DO GOOD
– Give to The Salvation Army’s workforce development efforts and get involved at westernusa.salvationarmy.org.

– After years of prison and drug and alcohol addiction, one act of kindness propelled Will “Boxcar” Davis into recovery, helped him to find home and a new skill with electrical training. Watch the story of the man who once robbed trains of their cargo at salar.my/BoxcarDavis.

“It’s all part of a strategic approach to help people move from our social services, shelter and transitional living, through education, training and job placement, to really help them improve their standard of life,” said Major Ivan Wild, Del Oro Divisional Commander. “We want to see transformation in the lives of people, and being able to get them housing and jobs is imperative to prevent them from coming back on the streets or falling back into poverty.”

Homelessness surged 30 percent in Sacramento County between 2015 and 2017 to some 3,665 people, according to Sacramento Steps Forward, an agency that coordinates local efforts to aid the homeless. Now Sacramento is one of 11 California cities eligible for $150 million in state money to fund homeless programs in the coming year, and the city is poised to declare an “emergency shelter crisis” in order to receive funding, according to The Sacramento Bee. Many of these individuals fall into the region’s 3.3 percent unemployment rate, notably the lowest it’s been since 1990, according to state data.

“We want to align them with partners to help them dream for themselves,” said Major Martin Ross, Sacramento Social Services Director. “I hope each student gets a hope and a belief that the future can look bright. That if they stick to it they can take care of their families, find a place to live and a career.”

And it works, Ross said, noting the workforce development programs range from 80-90 percent of students securing employment. “That’s a tremendous return on investment in terms of changed lives,” Ross said.

Kitchens in Sacramento and Napa take in culinary students for 16-week training programs that encompass all aspects of the food industry, from food safety and sanitation to knife skills and local and global cuisine. The Napa program is also adding a hospitality course, certified by Napa Adult Education, to teach students about the industry.

“My hope is that we’re continually pointing educated and qualified workers into this workforce, and this program continues to be a pipeline for the hospitality industry in getting a workforce that is an asset,” said  Paul Fields, Napa Culinary Training Program Executive Chef.

Graduate James Harlan now works as one of the head cooks at a Salvation Army Sacramento shelter and assists with the culinary training program.

“It’s a pretty demanding program, so it sets you up to be successful in the restaurant industry,” Harlan said. He enrolled after working through addiction at the Oakland ARC. “The opportunity came up for me to go to culinary school and I thought it would be a good way to get my life back together and try to get gainful employment and get settled in somewhere. I currently have my own place and pay my own bills.”

Similarly, LaDonna Lane was working on her recovery when she discovered the culinary program and signed up. She is now the cook at a local substance abuse rehabilitation center, McAlister Institute.

“I’ve been able to establish a foundation of changing my life around,” Lane said. “It was hard work…but it was good. It got me to be productive and it steered me in a direction to where I felt like I had purpose and I had a goal. I had structure and discipline, and I was learning. It was exactly what I needed at that time.”

The Salvation Army’s workforce development programs in and around Sacramento have seen 80-90 percent of students secure employment.

“Communities look to The Salvation Army in a tremendous way to help solve some of the issues regarding disenfranchisement and homelessness,” he said. “What better way than for a true army—strategically positioned in every medium to major cities in the United States to launch a campaign to combat poverty—than by starting a workforce development program?”