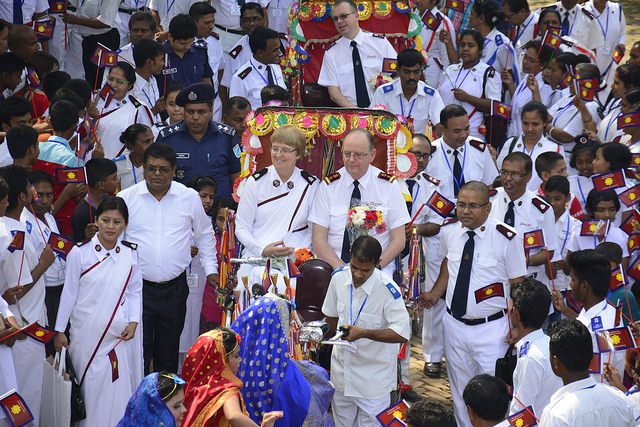 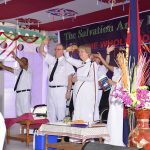 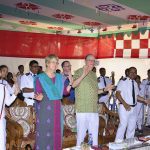 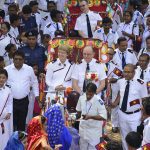 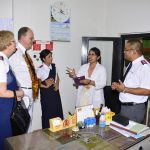 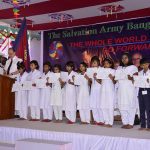 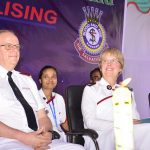 General André Cox and Commissioner Silvia Cox, World President of Women’s Ministries, celebrated Easter with more than 600 Salvationists and friends in Bangladesh. The Bangladesh Command’s Easter Congress drew people from across the country to share in a time of contemplation and joy at The Salvation Army compound in Savar.
On Good Friday, April 14, the Coxes entered the compound on a rickshaw, with crowds lining the paths. Worship and drama from young people contributed to the reverence of the meeting that followed.
The General challenged the congregation to see that Jesus was not a “victim of circumstance” in going to the cross but that he accepted it as his mission. Many people went forward to kneel at the cross-shaped mercy seat in rededication.
Saturday was a day of rallies, beginning with a youth event that contained vibrant worship, drama and testimony. The General encouraged the young people, telling them there was nothing they could not achieve, despite any challenges they faced in their lives. Silvia Cox exhorted her listeners to walk in a relationship with God. “Walking humbly with the Lord means we are in communion with him,” she said.
In the afternoon, men’s and women’s rallies were held simultaneously. The men heard testimony and a challenge from the General to trust in Jesus despite the anxieties they may be facing. The women were reminded by Silvia Cox that it is possible to be transformed completely through the power of the cross.
The Easter Sunday celebration April 16 was infused with a sense of hope and joy. The General enrolled 11 junior soldiers and 18 senior soldiers. In his Bible message, Cox challenged the congregation to answer the question: “How do our lives show we are inhabited by our living Lord?” Many people of all ages responded to this question at the mercy seat. The meeting concluded with a celebration dance.
Dressed in Bangladeshi clothing, the international leaders then participated in a cultural program where the story of Bangladesh was told through dance and song.
The final day of the visit included a tour of command headquarters and the Sally Ann shop, where the visitors heard stories of the difference that the Sally Ann trade project (also known as “Others”) makes in the life of women. The Coxes then visited Mirpur Urban Health Department Project, which is based in an area inhabited mainly by refugees. The project works to minimize the risk of tuberculosis and leprosy, treating sufferers with compassion.
“We cannot meet the full weight of human need,” the General said, “but it is important that we make a difference in the lives of people.”
Sharing is caring!
Tags:
April 2017, General André Cox, International Headquarters (IHQ)