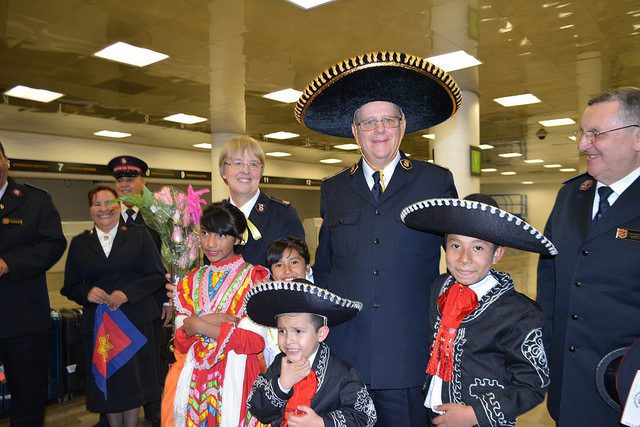 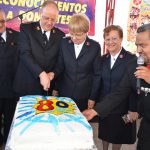 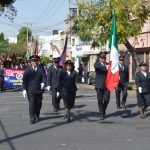 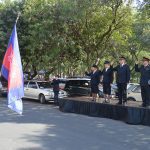 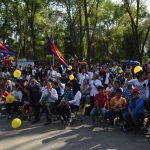 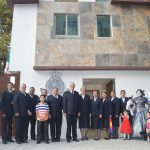 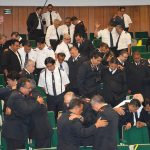 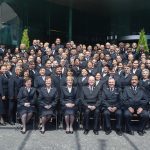 General André Cox and Commissioner Silvia Cox, World President of Women’s Ministries, recently led the celebration of the 80th anniversary of Salvation Army ministry in Mexico.
The General presented the Army’s highest honor, the Order of the Founder, to Major Angela Vargas Rodriguez de Tavares. The 92-year-old officer—daughter of two of the country’s first Salvationists—was the first Mexican Salvationist to be admitted to the order.
There was great excitement in the congress congregation when de Tavares received her certificate, which spoke of her “distinguished and sacrificial service in the Spirit of Christ, through more than 60 years as an officer, often given at personal risk to life and health, with the prime aim of extending God’s Kingdom on earth.” The major and her husband had served in The Salvation Army—and a linked organization, The Salvation Patrol—since the 1930s. Together they oversaw health programs, children’s homes, evangelistic missions and other forms of ministry, often in dangerous places.
At a press conference with reporters from TV and radio stations, Cox explained that Salvationists must be messengers of peace in this turbulent time, giving particular prominence to the critical issues of immigration and refugees.
During an inter-church gathering, Bishop Andrés Hernández said, “To speak of The Salvation Army is to know that, at dawn, they begin their days on their knees, in faith, facing the unknown.” Meetings with government representatives Humberto Roque Villanueva and Jorge Cravioto opened doors for The Salvation Army to work with the authorities in promoting human rights and giving support to the displaced.
Swiss Ambassador Louis-José Touron expressed his desire to support the work with immigrants on the Mexican borders. At a Rotary Club meeting where the General was named an honorary member, he encouraged his listeners to create bridges not walls, helping everyone without discrimination.
The 80th anniversary congress was attended by hundreds of Salvationists from all over Mexico. During one of his Bible messages the General spoke about unity in Christ, emphasizing growth through prayer and Bible reading. Mentioning the Army’s 80-year history in Mexico, he encouraged the congregation members to remember the past but to focus on the future, both in their spiritual life and in social action toward the community.
Silvia Cox warned the territory’s young people, “It is not enough to have good intentions; we should seek God with all our hearts.” In the women’s ministries meeting she quoted Colossians 3:13-14, which speaks about forgiveness and love, emphasizing that Salvationists and other Christians must clothe themselves with these qualities in order to be transformed more and more into the image of God.
At the holiness meeting, 56 soldiers who responded to the call to officership were offered words of challenge by the General.
The congress concluded with a march of witness and an open-air meeting at which The Whole World Mobilizing flag was flown. The open-air included people kneeling in prayer to seek the Lord.
Sharing is caring!
Tags:
Americas and Caribbean, anniversary, featured news, General André Cox, Mexico, Vol 35 No 04