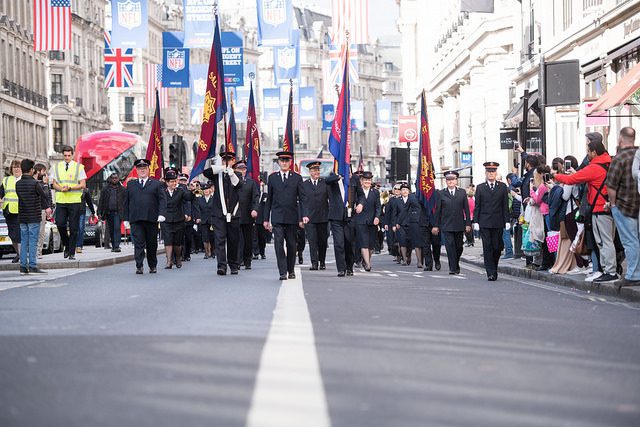 The General challenges The Salvation Army to keep mobilizing 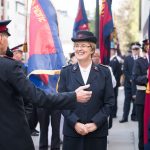 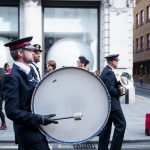 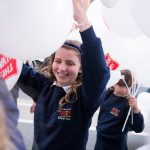 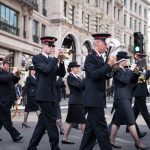 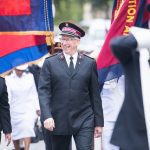 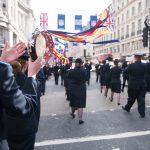 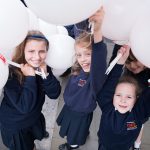 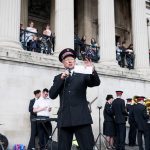 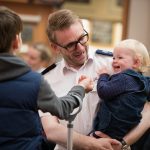 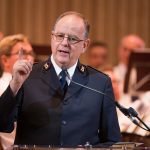 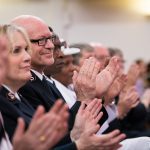 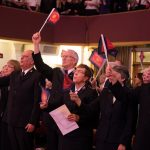 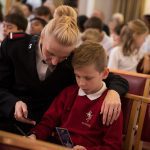 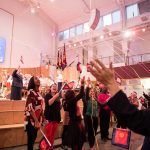 General André Cox urged Salvationists and friends to “Go Forward!” during The Whole World Mobilizing Celebration Day Oct. 9 at Regent Hall Corps in the heart of London. The event recognized the many ways that people around the world have responded to the General’s call to leave their halls and find creative ways to meet  people’s needs and take the gospel message to their communities. The day of praise and celebration included participation from the corps sections, ensembles from the U.K. and International Headquarters (IHQ) officers and employees.

Amid flags representing each of the five international zones and a Whole World Mobilizing flag, Commissioner Rosalie Peddle spoke of Mobilizing flags being carried in territories where Christianity is threatened or along hot, dusty roads. She noted that lives have been transformed through the initiative. Lt. Colonel Kalie Webb (IHQ) introduced the prayer focus with a series of pictures displaying how Salvationists have mobilized through marching, practical assistance and creative activities. During this time the congregation formed small prayer groups around the hall.

Commissioner Cox said that no one could have imagined how the vision of a mobilized Army would capture the hearts of Salvationists around the world as they rediscovered the importance of going back out to the streets. She prayed that this would continue to the glory of God.

Contributing to the day’s theme, the singing company performed “Dare to be Daniel,” and the Regent Hall Songsters—with guest soloist Suzanne Rose from Kettering Citadel—sang “My Covenant.”

In his message, the General explained that The Whole World Mobilizing is doing what God has been asking The Salvation Army to do for 152 years. “These are our people,” he said, referencing the words of Founder William Booth about the poor and the lost.

“We cannot sit complacently in our places of worship because—unless we’re fully engaged in mission—there are people who may never experience the love of God,” he said. “The challenge for The Salvation Army, 152 years into history, is to capture the vision of the early pioneers to change the world. If ever the Army chooses to demobilize—to go back into barracks—ultimately it will not exist.”

During the final moments of the meeting, many people responded in commitment.

Regent Street traffic came to halt that afternoon when the international leaders and the band led Salvationists of all ages and nationalities on a march to Trafalgar Square for an open-air meeting. Hundreds of people stopped to listen, many engaging in conversation. Salvationists distributed Army publications and the youth handed out red shield balloons. The Chief of the Staff served as master of ceremonies, with entertainment by the band, the male vocal group FourHymn, and Konverse, a dance ensemble from Barking Corps.

Later, back at Regent Hall, the celebration meeting began, led by Ester Ellen Nelson, an Icelandic Salvationist who is project manager for The Whole World Mobilizing. Konverse Dance and W1 Gospel Choir performed

Before the celebrations, the Chief of the Staff led a time of prayer for people around the world who have been affected by disaster and terror. “We need to remember our international family today,” he said.

Video segments showing the international Salvation Army’s response to the General’s call to get out of their halls and engage with their communities included a piece about the Mobilizing campaign, a peacemaking song from Kenya and the Lord’s Prayer in a variety of languages. New videos created for the event included a short film by the Bill Booth Theater Group (USA Eastern), testimonies from India and the USA, a remix of a speech by the General (created by Salvation Factory, USA Eastern) and a modern twist by DJ Morph on the traditional Salvation Army song “Rouse, Then, Soldiers, Rally Round the Banner!,” calling today’s Army to “rally up!”

The international approach was obvious throughout, including prayers from IHQ officers in their native tongues and cultural dress, and a group Bible reading presented by a representative from each of the five IHQ zones.

Timbrelist Zena Osterberg, from Hadleigh Temple Corps, gave a clear example of mobilizing, as she shared how God led her to use her passion for this traditional Salvation Army instrument. She began a group called Timbreltastic aimed “in the community rather than in our church building.” Since beginning the group in June 2016, more than 80 people have taken part, of whom more than two thirds previously had no links with the corps.

The General laid down a challenge for all Salvationists. “The call is to go,” he said, “to go out into the world, not remaining hidden in our halls.”

Explaining how The Whole World Mobilizing has seen people try innovative and imaginative ways to reach their neighborhoods, he reminded Salvationists and friends: “God calls us to be a force for transformation in every community.” Setting out his objective that emphasis on mobilizing should not end when 2018 comes around, he concluded with a rallying cry: “Salvation Army, it is time to go forward!”

The meeting closed with the singing of “I’ll Go in the Strength of the Lord,” punctuated at the end by the firing of streamers over the congregation.

For people who could not be present, the two meetings, the march and the open-air meeting were all streamed live via the Mobilizing website and Facebook. At the time of writing, the three meetings had been viewed a total of more than 47,000 times, with comments on Facebook from around the world, including Australia, New Zealand, Japan, India, Pakistan, Zambia, Italy, Sweden, Spain, Jamaica, the USA, Canada and Ecuador.

The three sessions can be viewed at sar.my/tv and on the “Mobilizing” blog or via www.facebook.com/mobilising.