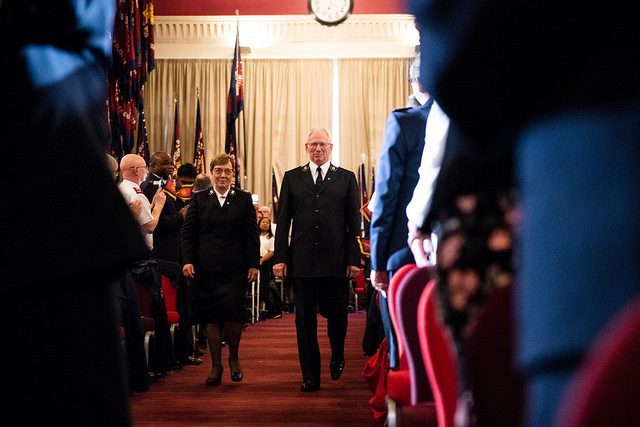 General Brian Peddle set out a clear but challenging vision for The Salvation Army at his welcome meeting at William Booth College in London. He called on the congregation of more than 400 people—and in excess of 10,000 viewers watching the live stream—to “be The Salvation Army that God needs us to be in this 21st century.”

In a meeting that included many thought-provoking moments, perhaps the most moving was when the General and Commissioner Rosalie Peddle, World President of Women’s Ministries, made their way from the platform to kneel at the mercy seat. The General encouraged everyone present to join in committing themselves to God’s service by kneeling at the place of prayer or standing where they were. Quietly, the members of the congregation did just that, while the International Staff Songsters (ISS) sang “Bow the Knee.” 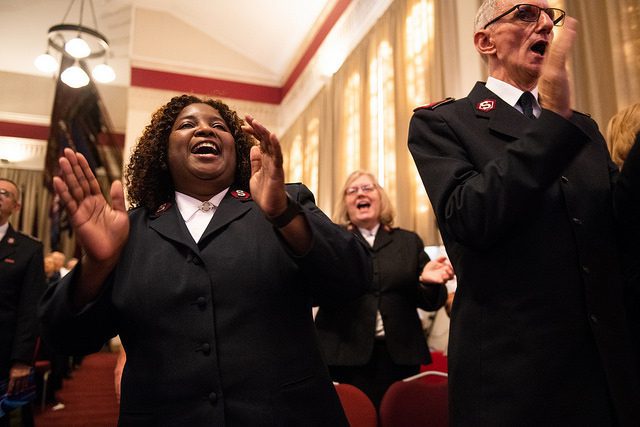 The meeting began in lively fashion, with members of Croydon Citadel Singing Company racing down the aisle, cheering and waving flags. They were followed by International Headquarters flag-bearers and then—to clapping and cheers from the congregation—Chief of the Staff Commissioner Lyndon Buckingham and Commissioner Bronwyn Buckingham, World Secretary for Women’s Ministries, marched in. Finally, the Peddles marched to the front, greeted by prolonged applause.

The Chief of the Staff acknowledged the presence of previous international leaders, along with territorial leaders who had gathered for the upcoming General’s Consultative Council, and welcomed the people from many countries watching online. “We are united around the globe because of our love of Jesus,” he said.

In her prayer, Bronwyn Buckingham spoke about the Day of Prayer for Victims of Human Trafficking that was being marked by the international Salvation Army. Calling God to bring freedom to the millions of people caught up in modern-day slavery, she acknowledged that “these are big prayers, but you are an even bigger God.”

The General spoke briefly about the “keen sense of privilege” he felt to be asked to be the 21st General of The Salvation Army. He recalled that one person had told him the Army was “in good hands,” explaining that he answered straight away: “As long as it’s in God’s hands.” 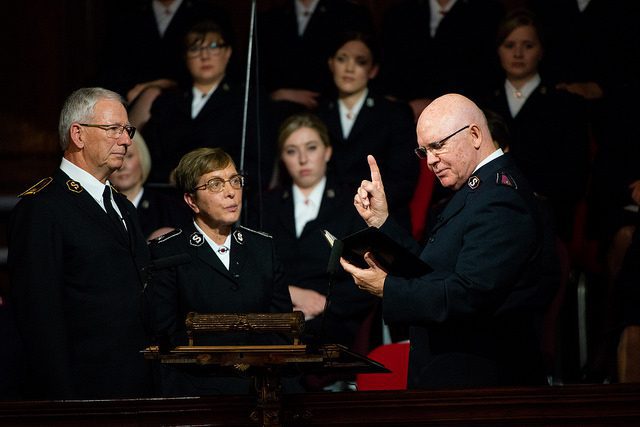 A time of music led by the William Booth College Worship Team was followed by a video showing prayers by Salvation Army young people from around the world, praying for the new General and for the Army’s worldwide mission.

Regent Hall Band’s “Fill the World with Glory” was followed by a Scripture reading by Fredah Mfundisi—a fellow soldier of the international leaders at Southwark Corps. A lively version of “Jesus, be a Fence” by Croydon Citadel Singing Company was accompanied by images of young people’s music groups from around the world.

A time of dedication was led by Commissioner John Matear, who—addressing the General and Rosalie Peddle—assured them of the support of a great crowd of witnesses. He told the General: “We, your people, need you to be led by God before you lead your people.”

Commissioner Betty Matear dedicated the new leadership team to God in prayer, calling on him to bless each person. 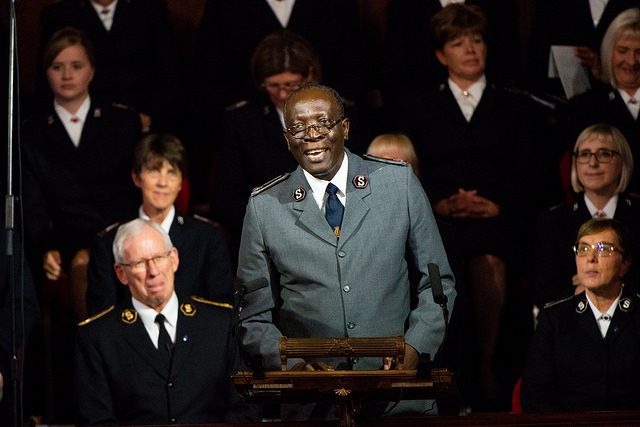 Bringing words of welcome on behalf of the officers of the world, Commissioner Devon Haughton (Territorial Commander, Caribbean Territory) told the General and Rosalie Peddle: “We are proud to call you our international leaders.” He encouraged them to remain “enthusiastically dedicated” to the mission and concluded with a reminder in song: “Don’t let anyone steal your joy!”

Offering a welcome on behalf of the soldiers, Dr. Marjory Kerr (President of The Salvation Army’s Booth University, Canada) recognized that while some soldiers lived and worshipped freely, there were others for whom “every day is a challenge.” She called on the General to engage with his soldiers and to “be prepared to test everything—with us.” 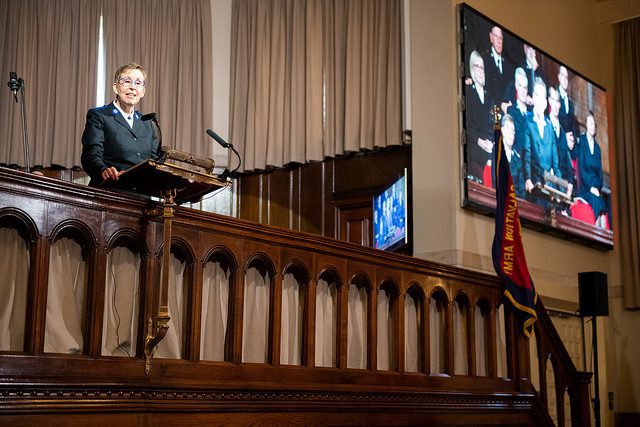 After the ISS created a worshipful atmosphere through “In the Name of the Lord,” Rosalie Peddle responded to the words of welcome. She began with a public thanks for the huge number of cards and emails she and the General had received since his election.

Referring to her role as World President of Women’s Ministries—or “The Salvation Army’s mother” as she has been called—the commissioner spoke of the huge challenges faced by women and girls around the world.

She vowed to “future-proof” The Salvation Army’s women’s ministries work, ensuring it was “relevant, ready and resourceful.”

Peddle spoke with great affection about her and the General’s support from and love for their family, so it was appropriate that her words were followed by a song—“He Leadeth Me”—presented by their daughters, Captain Krista Andrews and Stephanie Forystek. 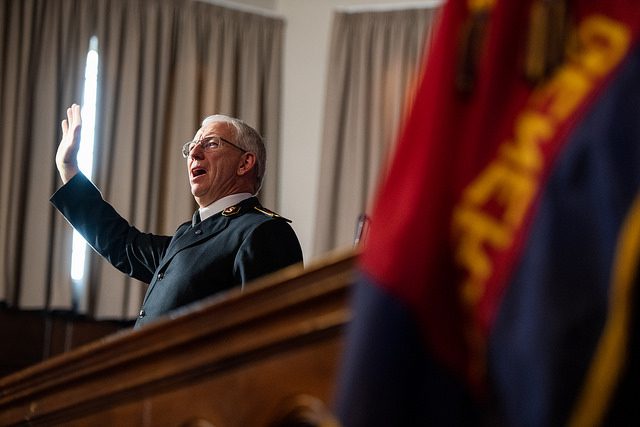 He presented his call to The Salvation Army—a call to mission. Using the themes “Be Ready, Be Engaged and Take Responsibility,” he told the congregation, “God is calling us to be ready for his mission…Engaged right where he has placed us or where he is calling us,” and that Salvationists and friends need to take responsibility for fulfilling God’s mission “even at personal cost.”

He had nine calls for the worldwide Salvation Army—starting with calls to prayer and holiness, and a call to be battle-ready. “The days of mediocrity are over,” he cried, adding that it was time to “take back what the devil has stolen.”

Calling people to serve, he explained: “We are not a reserve Army!” He called people to worship, to invite people to Jesus and to be confident in the gospel. 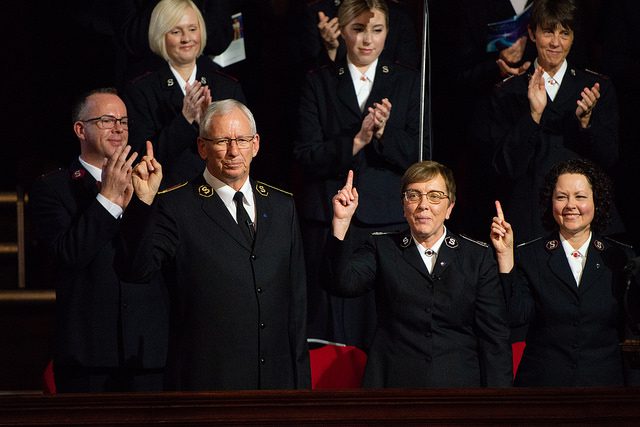 The final three calls were to take responsibility. The General called The Salvation Army to raise and nurture the next generation. “Nurtured, not abused,” he added, before giving the final calls—a call to costly compassion and a call to inclusion. “God loves everybody,” he reaffirmed. “God help us and give us wisdom!”

Reaching his conclusion, the General stated: “I hear the simple call to ‘do something.’” But he said that it isn’t enough for the General to do this alone. “This will take a whole army,” he said. “Imagine that—we have one!”

The meeting finished with the rousing singing of “Storm the Forts of Darkness” before attendees made their way out to share refreshments and a time of fellowship with the international leaders.

Many will have left with the General’s concluding words still ringing in their ears: “God has yet to do things that we could never imagine could happen!”