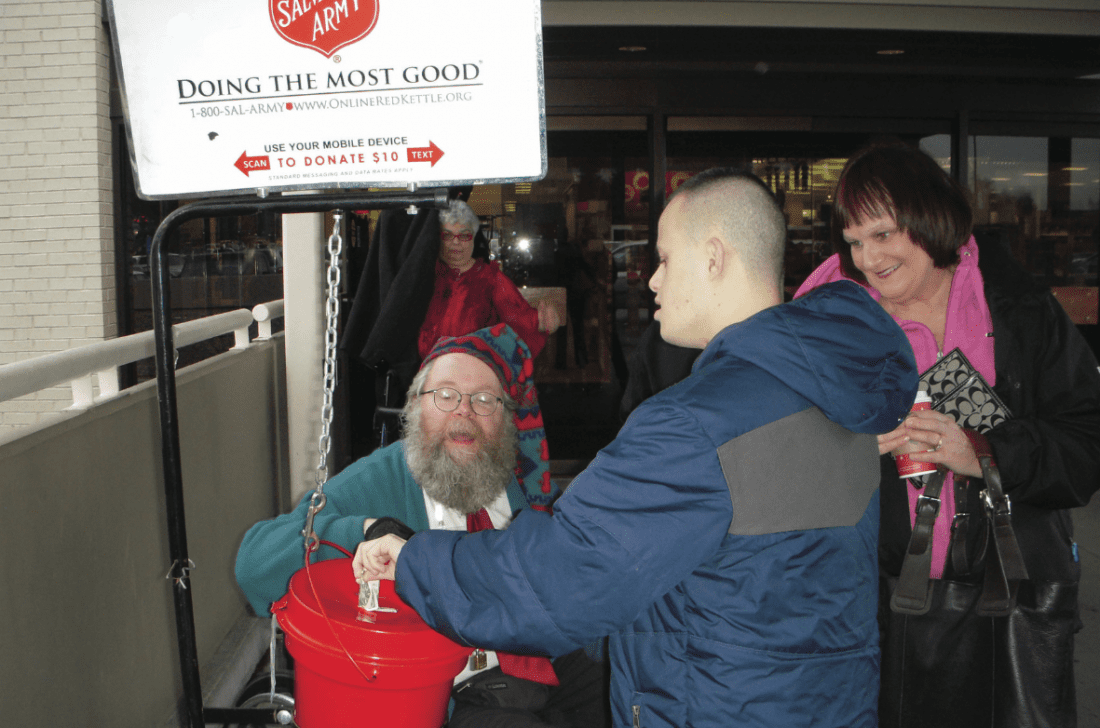 As he waves and smiles from behind a wavy gray beard, the golden buttons gleaming against his green wool vest and a festive stocking cap pulled tight over his head, Bryan Mackey  does look the part of St. Nick.

The girl first stares in awe, then grins and unclasps her arm from her mother’s neck, nearly lunging from her hip as she reaches to slide a folded dollar bill through the slot in Mackey’s red bucket. Christmas music plays on a small plastic cathedral radio next to Mackey’s feet.

“That’s the best part right there,” he says. “Kids just love it.”

For two decades, Mackey has delighted children outside metro area retailers as a bell ringer for the Salvation Army.

Perhaps more than holiday displays in shop windows and reindeer songs on the radio, Mackey and other bell ringers signal the holiday season’s arrival to shoppers throughout the Portland area.

He became a bell ringer more than 20 years ago, when he was between jobs and a temp agency hooked him up with the seasonal work.

After that winter, Mackey volunteered every year, ringing the bell for free and chipping in at the distribution party, where needy families collected boxes of food and toys purchased with money from the donation kettles.

During those years, he would imitate Santa on the radio, reminding listeners to donate to the Salvation Army’s holiday campaign.

“You’ll never know when you might need a hand,” he would say.

At the time, Mackey didn’t know those words would later apply to him. His face reddens as he tells the story, before a flood of tears breaks through.

“I just didn’t know when I said that, it was going to be prophetic.”

Five years ago, complications from diabetes led to the amputation of Mackey’s right foot. His employer laid him off while he was recovering in the hospital.

“The Salvation Army were there for me,” he says.

The volunteer bell-ringing gig became a paid job, 40 hours a week from Black Friday through Christmas. Now, this yearly gig is Mackey’s only income. In the off season, he volunteers at the Oregon Zoo and writes adaptations of classic plays to be performed by high school drama students.

He likes the job, except for one pet peeve. Most people incorrectly call the donation receptacle a bucket.

Simply stand – or in Mackey’s case, sit – near the kettle, greeting shoppers with a “Happy holidays” or a “Merry Christmas” or a “Have a great day” as they enter and exit the store.

Never ask for money, but never fail to thank someone who donates.

And of course, the bell. Always ring the bell.

Three of the past four years, he has been the metro area’s highest-grossing bell ringer. He attributes the success more to favorable stomping grounds than a particular finesse with shoppers.

“I’m not here to coax people into putting money in,” he says. “I’m here to project Christmas spirit.”

He says a handful of change from a donor whose well-worn clothes betray their limited income is just as important as the $20 bill that a well-dressed man quietly dropped in the kettle without a word on a recent afternoon.

Unable to drive, Mackey takes public transit from his home in Portland to Washington Square. The trip takes more than an hour, but he prefers this spot over the closer-to-home ones.

On the back of his wheelchair hangs a backpack filled with the necessities of an eight-hour shift: radio batteries, snacks, gloves.

For a while he carried a credit card scanner, but it got used so rarely Mackey stopped. Now, shoppers who want to donate but don’t have cash can scan a QR code to donate $10 directly from their phone. It doesn’t get much action, either.

“If the spirit strikes them, they like to put money in,” he says.

Mackey says the number of people tossing change into the kettle has dwindled with the recession, but he also notices more $5 and $10 bills as wealthier donors recognize the need to contribute in tough times.

A couple of years ago, a woman brought in a grocery bag full of coins. It nearly filled the kettle before Mackey gave up and left out the rest of the change.

Mackey enjoys the job’s contact with people. He sees more new faces in a given day than most people do in a week or more.

A lot of people don’t say anything as they toss coins into the kettle. Then there are those who have a story to tell. They donate because they know firsthand the good it does.

A couple weeks ago, a donor confided that her homeless daughter often receives Salvation Army services. Such interactions are increasingly common, Mackey says.

“I frequently have people tell me about some situation where they were in need or knew someone in need,” he says.

The kids are always most eager to interact. They’ll drop some coins in the kettle then rubberneck all the way back to the car as Mackey shouts in their direction.

“Thank you very much. That money is going to help people,” he tells them, seizing the opportunity to teach a lesson in giving. “I am one of the people your are helping.”

Reprinted from The Oregonian December 12, 2012. ©2012 All rights reserved. Reprinted with permission.

Kelly House is a writer for The Oregonian.