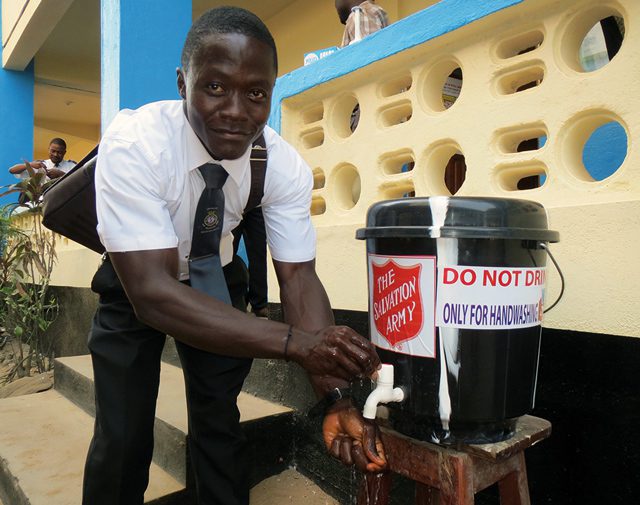 Yet the international organization, which currently works in 126 countries, recognized the potential global danger such an epidemic posed and assembled a monitoring team at International Headquarters (IHQ) in London.

Members of the IHQ team visited Liberia this spring to provide firsthand evidence of the ongoing work in a country with over 10,000 Ebola cases and nearly 4,500 related deaths to date, according to the U.S. Centers for Disease Control and Prevention.

New Frontier Chronicle spoke with Swansbury for an update.

NFC: How would you briefly describe or assess The Salvation Army’s response to the Ebola epidemic?

CS: The Army’s response to the Ebola crisis has been strategic, targeted and proportional. The work has been undertaken within the capacity of the Liberia Command, using local teams and resources, such that it has been recognized and acknowledged as commensurate with our size and strengths.

The Army’s project officer, Captain John Bundu, has been an active member of the emergency response committee, at which all the government agencies and international donors have regularly met to coordinate the work of responding to the pandemic outbreak.

One of the greatest accolades was when one of the Liberian health coordinators commented that The Salvation Army has been filling the gaps that other agencies haven’t been able to meet.

In response to the Ebola outbreak the Army has implemented several emergency projects:

Much of this work has been the provision of food, water and emergency resources to communities that were restricted in movement or otherwise isolated because of Ebola, along with the provision of washing and disinfecting measures to combat transmission of the virus by contamination.

What are the long-term plans for continued response?

The following community projects are either underway or in the latter stages of planning prior to implementation:

It is recognized that with all schools and small clinics in the country having been closed for eight months there have been huge needs to prepare the facilities for re-opening. Many of the buildings were used as temporary shelters; others have been vandalized, etc., such that without additional support these might not recover.

What is the process for dealing with international health crises? For example, how does the health desk at IHQ monitor situations like this? How does the Army establish working connections with partner agencies?

The International Emergencies Section (IES) within the Program Resources Department at IHQ continually monitors world events, be it earthquakes, extreme weather conditions, humanitarian situations, etc. If these happen in parts of the world where The Salvation Army has an existing presence, then the IES team quickly send a message of support, offering the opportunity of small-scale emergency response funding and, confirming whether or not the territory or command is able to implement a response from within its own teams and resources.

For example, during the latter months of 2014 and into 2015, there have been severe floods across northern Asia, affecting Bangladesh, India and Pakistan, and southern Africa, affecting Zimbabwe, Malawi and Mozambique. In each case small rapid response projects have been implemented within each territory or command to provide resources and provisions to those affected.

Where the situation escalates beyond the capacity of the local administration, the territory or command has the prerogative of asking the IES to take the lead in coordinating an international response—as in the case in Haiti, the Philippines and Japan. The IES team will seek to utilize locally trained emergency staff in the first instance, but have a pool of trained staff to deploy as needs require.

In such cases the IES staff will consult and coordinate with other international donors and agencies to determine what The Salvation Army can contribute to the needs on the ground.

When an international emergency occurs in places where the Army does not have an established presence, then, should the Army’s engagement be deemed appropriate, the IES team would normally seek to work in collaboration with another international agency.

Of course, the greatest opportunity is that we are already at work in many places affected by various calamities, thus we have the benefit of being there before the crisis occurs, working with the community during the emergency situation, and being there long after other agencies might have moved on.

As with all such projects, the response is in three phases: what needs to be done to meet the immediate human need; what are the needs to make safe the emergency situation; and what investment and development would be appropriate to enable the community to recover and restore the situation on the ground.

The IES team is a recognized partner in a number of collaborations and multi-task agencies, so that our contribution and abilities are recognized and understood. One benefit of the internationalism of the Army is that we very often have people on the ground with firsthand knowledge of the country, its infrastructure and capacities, which makes first response activities much easier to implement.

You mentioned this is the first visit of IHQ staff to Liberia; is that the first Ebola-related IHQ staff visit? If so, why the delay?

There were two reasons why a support visit to Liberia has not been considered until this moment in time.

First, because the type of projects implemented to date were well within the capacity of the teams on the ground to implement. The Liberia Command has staff, it could co-opt a large number of teachers who were otherwise unemployed when the schools were closed, it had existing transport facilities and centers from which food distribution and other activities could take place. The IHQ projects team maintained regular contact by means of Skype and telephone calls, thus there was no need to add to the work on the ground by deployment of external staff.

Second, The Salvation Army does not have staff trained in emergency health care or the need to engage in that type of work, nor did it have the means to implement the provisions of protection that were associated with that level of risk. Thus it was not considered safe to deploy any external project staff until the restrictions on international travel had been relaxed.

What was the goal of the visit to Liberia?

A number of the emergency projects are drawing to a close and other long-term redevelopment projects are needing to commence over the next few months, such that a site visit was deemed as being helpful to assess and develop the concept notes.

Further, Salvation Army schools and the health clinic in Liberia have recently been re-opened, such that it was beneficial to assess the effectiveness of the project support that has been allocated for these purposes.

A follow-up report will provide much-needed insight as to how the next phases of the intervention might be more effective and appropriate.

What is the current greatest need connected to Ebola?

The current needs connected with the Ebola outbreak are to restore the opportunities for people to resume their normal, everyday activities. People need jobs, homes, opportunities for education, health care facilities, resources—many of which have been disrupted over the past months.

Those bereaved and adversely affected need to have their trust rebuilt, their confidence restored, their motivation renewed.

The church can be part of that process—in fact it is the best environment in which these can be re-established.

How important is fundraising in times of international crises, health or otherwise? How are donors encouraged to help in this instance? What will their assistance go toward?

People around the world are incredibly generous during times of international crises. In fact, the greater proportion of funding availability follows an international emergency. While this is good, there are two dangers: first, that our responses may become donor-led rather than needs-led. For example, the severe flooding in Bangladesh and Pakistan was hardly featured on the international news, yet these caused considerable damage and loss of life.

Second, the equally necessary bread-and-butter work to improve infrastructure, health and education in some of the world’s poorest communities may consequentially suffer, leading to increasingly erratic cycles of crisis, need and desperation. For example, if countries such as those recently affected by Ebola had better equipped and resourced health care facilities, then the impact of the outbreak would undoubtedly have been much lower. Investment in capacity, investment in resource is therefore as important, but these don’t necessarily catch the interest of the media or demand the same levels of attention.

That is why an important part of the work of the Army’s International Emergency Section is to help to build the capacity of staff in all parts of the world in order that our ability to respond in times of crisis is even more effective and purposeful.

Donors can be assured that any emergency response follows IHQ protocols in terms of project applicability and viability: what we say we will do, we will do. Donors can be similarly assured that the work of the International Emergencies Section follow international standards for humanitarian aid, thus the work undertaken strives always to be purposeful, appropriate and effective.