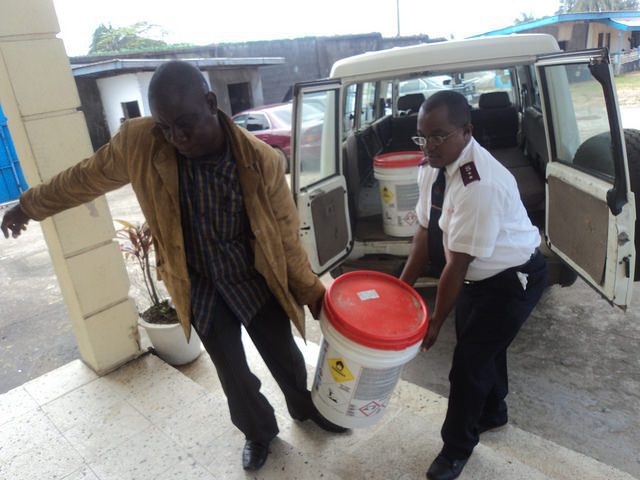 As with many emergency situations around the world, The Salvation Army has the advantage of already having personnel on the ground, meaning that it can react quickly to any changes in the situation and that it is aware of the reality of people’s fears and concerns. Its response to the Ebola epidemic is being managed at International Headquarters, where a monitoring team is in daily contact with Salvation Army leaders and project officers running the Ebola response in west Africa. The team is providing a weekly report to General André Cox, who is taking a close personal interest in the ongoing situation.

Commissioner Charles Swansbury (International Secretary for Program Resources, International Headquarters) chairs the Ebola crisis monitoring team, which includes representatives from International Emergency Services, International Health Services and International Projects and Development Services. He reports: “We understand that people want to know what The Salvation Army is doing to combat this terrible situation. I can assure Salvationists and friends that we are acting in a responsive and appropriate manner, seeking to support the Liberia Command (which also oversees the work in Sierra Leone). Reviews and briefings, both internal and with other agencies, have concluded that the Army is doing all that can be reasonably expected.”

In Liberia, The Salvation Army is working alongside the government and international and local agencies and non-governmental organizations (NGOs) which specialize in medical responses, such as Young Life, the Liberian Red Cross and Médecins Sans Frontières (also known as Doctors Without Borders). These groups are mainly providing medical services, leaving the provision of food and other essentials to the government or other groups. An initial project undertaken by The Salvation Army is supporting 5,000 people with food parcels – many people who have recovered from Ebola are returning home to find their possessions have been removed in case of infection, and large areas are now without the expected working populations because quarantines and the fear of Ebola are making normal life grind to a halt.

The Salvation Army is looking to attend United Nations-organized WASH (Water, Sanitation and Hygiene promotion) and food cluster meetings, which draw together representatives from many NGOs and agencies.

Hygiene and hygiene education/promotion are important factors in the fight to slow down the spread of Ebola. With this in mind, consideration is being given to using teachers from The Salvation Army’s 12 schools in Liberia to provide Ebola awareness raising and hygiene education in the communities around the schools.

In Sierra Leone, plans are in place to provide food support and disinfection materials.

Local Salvationists in the region are also investigating reports that a number of children are being left orphaned and helpless when their parents catch Ebola. Once the situation becomes clear, they will look to see how best such children can be supported.

The Ebola crisis monitoring team is hugely grateful for the financial, practical and spiritual support that is being offered from around the world. There are no plans to send outside volunteers or staff to west Africa, and all activities being considered will be based on the capacity of the local Salvation Army. There have been many kind offers to ship clothes and other goods to the region, but The Salvation Army’s policy is to purchase such items locally, building local capacity and stimulating the local economy.

Donations to The Salvation Army’s ongoing disaster relief work in Africa can be made online by clicking here.