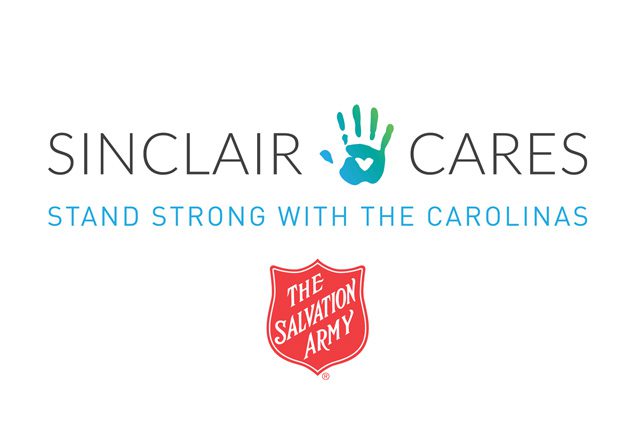 Sinclair Broadcast Group deemed September 20 as their “Day to Give,” during which the company hosted telethons nationwide at their stations to raise money specifically for The Salvation Army’s Hurricane Florence relief efforts.

“Through the ‘Stand Strong for the Carolinas ’ relief fund, Sinclair will be able to use our national reach to make an impact on the local communities we serve.. We are hopeful that this will make a difference for those who have been impacted by this devastating hurricane,” said Scott Livingston, Sinclair’s Senior Vice President for News. “We strongly encourage our viewers to join us in these efforts and donate what they can.”

As a result of Sinclair’s “Day to Give,” more than $141,000 was raised for those affected by Hurricane Florence. While the “Day to Give” began September 20, Sinclair continued their campaign through the weekend, since it had picked up momentum.

“We prefer money because there are specific needs that need to be met,” she said. “It puts the money back in those specific communities, helping the people there with what they need and getting them back on their feet.”

As of September 25, the Army has served 227,285 meals in response to Hurricane Florence.

The Salvation Army is on the ground in the most devastated communities providing food, hydration, and emotional and spiritual care for as long as there is a need, and Hurricane Florence response efforts are expected to be costly and last for years.