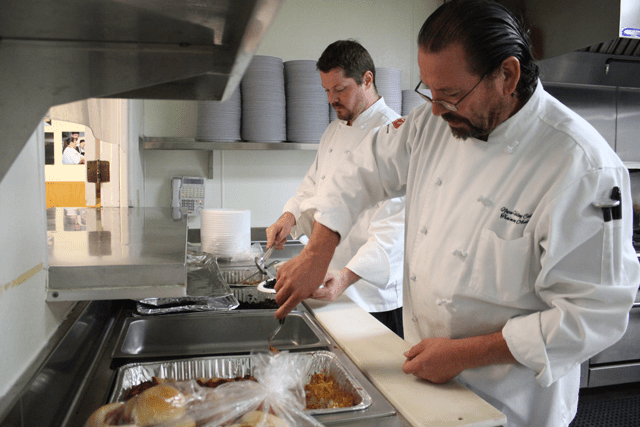 The Napa (California) Salvation Army has a host of volunteers assisting the corps since a major wildfire devastated the city in early October. Some of the best helpers have included a handful of recent graduates of the Napa Corps’ Culinary Training Academy.

“It’s been great to see so many willing to give back to a community,” said Major Kevin Hanson, Napa Corps Officer. “Those students have worked more than 12 hours a day to make sure that meals get prepared for the evacuees.” Sean Backman (back) and Steve Martinez (front) serve a meal from The Salvation Army Napa Corps. | Photo by Sydney Fong

One of those graduates, Sean Backman, came back to assist at the corps following the fire that destroyed the Silverado Resort’s kitchen. He was recently hired by the resort after graduating from the culinary program in September.

“I felt like I wanted to give back to a community that has done so much for me,” Backman said. “I didn’t worry about the job because I feel confident I can find work again.”

It’s been an all-hands-on-deck mentality since fire started on Oct. 8. Culinary Training Academy Instructor, Paul Fields, has overseen the food preparation for all evacuation center meals. He’s also reached out to local businesses for food donations.

“It’s been busy, for sure, but I think it’s been a good experience for everyone involved,” Fields said. “I love seeing my former students put into action everything they have learned, and I know they have made a difference in their community.”

In all, more than 20,000 meals were served during the first two weeks of meal service.

“This is a proud moment for the Napa Corps and the Culinary Training Academy,” Fields said. “The work shown by the graduates is a true indication that we can produce good quality food in any situation. Those students did great passing a real life test.”