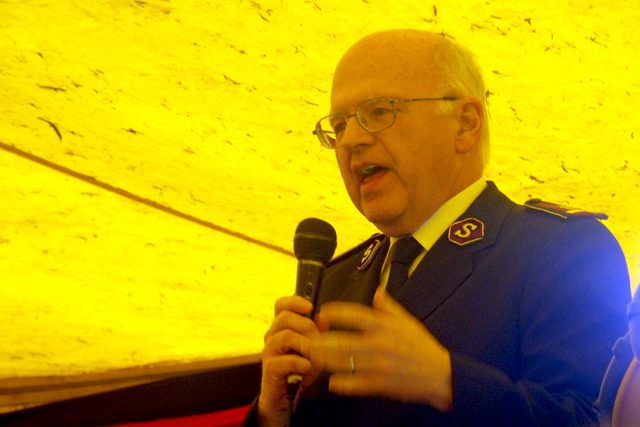 Delegates focus on importance of transparency and accountability.

Fifty-seven territorial, command and regional leaders from across Africa met in Johannesburg, South Africa, for the 2014 Africa Zonal Conference, themed “Christlike Leadership.” Leaders from the Liberia Command and the Rwanda and Burundi Command were unable to obtain travel visas.

During the conference, delegates considered a leader’s responsibility to reflect the Spirit of Jesus in all aspects of his or her ministry, focusing particularly on the importance of transparency and accountability, with Jesus as the example.

Philippians 2:5-7 laid the foundation: In your relationships with one another, have the same mindset as Christ Jesus: who, being in very nature God, did not consider equality with God something to be used to his own advantage; rather, he made himself nothing by taking the very nature of a servant (NIV).

Presentations included the spiritual life of a leader, developing both present and future leaders, true Salvationism, leadership challenges, financial issues, child abuse and domestic violence. Six small-group facilitators–not from the leadership teams–encouraged frank and open discussion on these topics. This was the first time that non-leadership personnel participated in an Africa Zonal Conference–with positive results. Relevant Bible studies addressed both personal and ministerial aspects of the conference theme, providing further opportunities for reflection.

Through the strong fellowship and time for personal reflection, delegates received spiritual refreshment and renewal of purpose. They returned to their appointments with clear vision and strengthened resolve that the Spirit of Jesus be seen in the administration of their areas of command.

On Sunday morning delegates joined the Chief of the Staff and Commissioner Nancy Roberts, accompanied by Commissioners Joash and Florence Malabi (International Secretary for Africa and Zonal Secretary for Women’s Ministries), at a divisional celebration of praise in Soweto, arranged by the Southern Africa Territory’s Central Division.

Officers and soldiers from the division gathered in a large tent to welcome the visitors in true African style, with much singing and dancing. Various music sections shared items of praise and worship.

Commissioner Nancy Roberts, in her words of welcome, testified to God’s saving grace, protection and love. She spoke of the love she and the Chief have for Africa. Two delegates from the zonal conference–Major Kapela Ntoya (Regional Commander, Mali) and Lt. Colonel Mary Mkami (Territorial Secretary for Women’s Ministries, Tanzania)–gave their testimonies.

In his Bible message the Chief of Staff remarked how incredible it is to all belong to the same Salvation Army. He called on the congregation to “be whom we say we are.” Reflecting on the apostle Paul’s challenge to “put on a heart of compassion, kindness, humbleness, patience, forgiveness,” he pointed out that the spiritual “clothes” people wear reflect who they are.

Many people stood in commitment and rededication to God during the singing of “I Surrender All.”

The Africa Zonal Conference was preceded by the All-Africa Women Leaders’ Conference, held in the same venue and piloted by the Zonal Secretary for Women’s Ministries. The theme for this conference was “Shepherding with Love.” Using Psalm 23 and John 21:15-17 as the foundation, topics for consideration included anti-human trafficking, child abuse and domestic violence. The delegates welcomed Commissioner Nancy Roberts as guest speaker in the final devotional meeting.